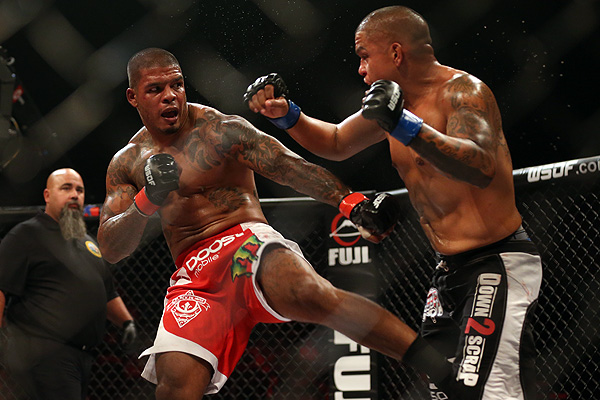 
World Series of Fighting 22 will go head-to-head against UFC 190 with one of the promotion’s most loaded cards to date.

In addition to previously announced welterweight and bantamweight title tilts, the promotion’s inaugural 125-pound belt will be up for grabs when Magomed Bibulatov clashes with Donavon Frelow. Also, kickboxing star Tyrone Spong will make his MMA return against Mike Kyle in another featured bout. WSOF confirmed the matchups on Tuesday following an initial report from MMAJunkie.com.

WSOF 22 takes place at Planet Hollywood Resort and Casino in Las Vegas on Aug. 1 and is headlined by a 170-pound championship clash between Rousimar Palhares and Jake Shields. In the evening’s co-main event, Marlon Moraes will defend the bantamweight strap against Sheymon da Silva Moraes. The card will be opposite UFC 190 in Rio de Janeiro, which features a women’s bantamweight title tilt pitting Ronda Rousey against Bethe Correia.

Bibulatov, a 26-year-old native of Chechnya, is 9-0 as a professional. Most recently, “Gladiator” scored a first-round knockout victory over Eduardo Felipe on March 14.

Frelow, meanwhile, is 4-0 since beginning his MMA foray in 2014. The Wand Fight Team member made his WSOF debut on Jan. 17, taking a unanimous decision over Taylor McCorriston.

Spong has been sidelined since suffering a gruesome leg injury in a loss to Gohan Saki at Glory 15 in Turkey on April 12, 2014. The 29-year-old Blackzilians representative returned to the combat sports arena in March, when he knocked out Gabor Farkas in the first round of a boxing match in Germany. Spong is 2-0 in WSOF, with victories over Angel DeAnda and Travis Bartlett.

A veteran of the UFC, WEC, Strikeforce and King of the Cage organizations, Kyle will attempt to garner his first WSOF triumph after falling to Andrei Arlovski and Anthony Johnson in his previous two promotional outings. The American Kickboxing Academy product recently halted a three-fight skid with a first-round submission of Baga Agaev at Abu Dhabi Warriors 2 on March 26.