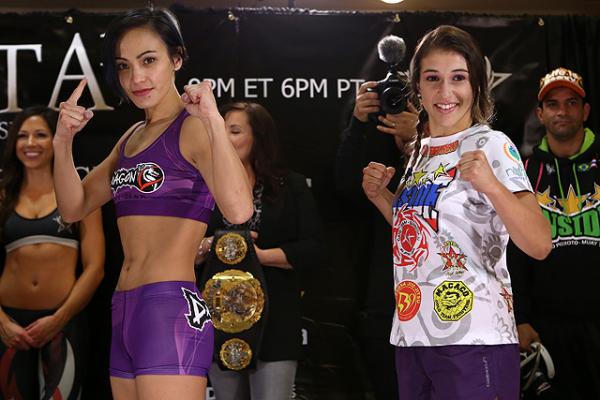 
Michelle Waterson has been cleared to make her second atomweight title defense in three months at Invicta Fighting Championships 10.

“The Karate Hottie” checked in at 105 pounds at Thursday’s weigh-ins, while her opponent, Herica Tiburcio, also tipped the scales at 105. Invicta FC 10 takes place at the Arena Theatre in Houston on Friday night and also includes a bantamweight showdown between Tonya Evinger (134.75) and Cindy Dandois (135) in the co-main event. The card streams in its entirety on UFC Fight Pass beginning at 9 p.m. ET/6 p.m. PT.

Waterson captured the 105-pound belt with an improbable fourth-round submission victory over Jessica Penne at Invicta FC 5 in April 2013. The Jackson-Wink MMA member made her first title defense on Sept. 6, stopping Yasuko Tamada in the third round at Invicta FC 8.

Tiburcio, a 22-year-old native of Sao Paulo, Brazil, has won three straight fights and is 8-2 as a professional overall. The Brazilian has finished six of her victories by way of submission.