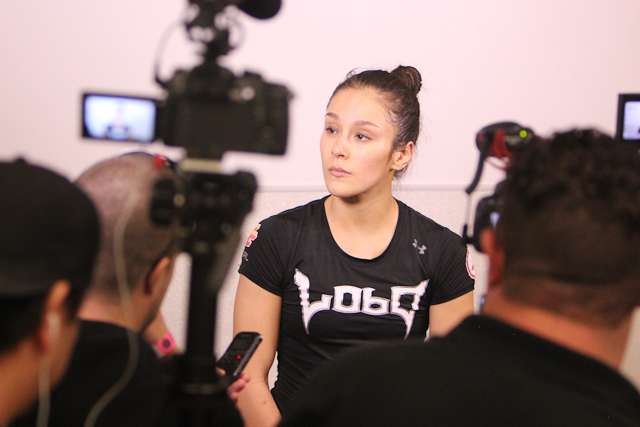 
LOS ANGELES -- Cristiane “Cyborg” Justino was the draw for most fans who watched Invicta FC 11 last weekend, but Alexa Grasso and Irene Aldana stole the show.

The Lobo Gym representatives made the most of the opportunities Invicta Fighting Championship afforded them, winning their fights on a card that served as the lead-in for the women’s MMA-anchored UFC 184.

The week began early for Grasso, 21, and Aldana, 26, as both rolled into Southern California from Guadalajara, Mexico, for the tandem Invicta/UFC open workouts. While such photo ops generally feature shows’ main and co-main event fighters, for one reason or another, Aldana -- whose bout opened the four-fight main card -- had a slot during the event at UFC Gym in Torrance.

The next day, shortly after Ronda Rousey and Cat Zingano faced off at UFC 184’s “Ultimate Media Day,” Grasso and Aldana tipped the scales for their bouts a few blocks away at the Millennium Biltmore Hotel.

All of this culminated in what both women call one of the biggest nights in their lives to this point.

Grasso competed in the Invicta co-main event against Mizuki Inoue, grabbing the win via unanimous decision. The fight was competitive on the feet as well as when it hit the canvas, earning the distinction of “Fight of the Night.” Meanwhile, Aldana needed only 65 seconds to finish Colleen Schneider with a rear-naked choke, her second consecutive submission win.

Both performances received high praise from Ultimate Fighting Championship officials like Dana White, Lorenzo Fertitta and matchmaker Sean Shelby, all of whom were in attendance at Shrine Auditorium.

Winning is obviously a driving force behind any fighter’s goals and aspirations, but for Grasso and Aldana, having the opportunity to compete on the same card for the first time in their budding careers was equally important.

“It was just the best thing, since we always are together,” Grasso told Sherdog.com after her victory. “We train together, we eat together, we almost live together. This is the best thing that has ever happened to us. This trip and the experience has been amazing and I can’t imagine doing it with anyone else.”

Aldana echoed the sentiments of her main training partner, adding that she would love to fight at the same event as Grasso again.

“I enjoy fighting on the same card as Alexa,” Aldana said. “She’s like my sister. It’s so motivating and unbelievable to share this sort of thing with her.”

The buzz coming out of Invicta FC 11 was that both women could sign with the UFC and possibly take spots on June’s UFC 188 in Mexico City. For now, the pair hopes to continue competing for Shannon Knapp’s all-female promotion.

“I think I should be the best in Invicta before I try and move on,” Grasso said. “This is the first step to the UFC, and I don’t want to move too fast. I am just now getting comfortable and getting experience, so I want to fight more before I get to the UFC, because they have amazing fighters there.”

“I am so happy in Invicta and want to continue my career here now. We will see what happens,” added Aldana. “I mean, I would love to fight on the UFC card in Mexico, but let’s wait and see. I would need to speak with Shannon and Dana before that could happen.”

With more stateside trips in their future, Grasso and Aldana have taken on learning the English language as an added aspect of their growth as mixed martial artists.

“I am trying to improve my English and will continue to work at it,” Aldana said. “I am going to take some English classes because I know it’s very important for my career. I get a little nervous with interviews, but I will improve.”

“I’ve been practicing with my coaches and team,” Grasso added. “We try and speak in English as much as we can.”

“I can’t wait to get right back to work with Irene,” Grasso said. “We have so much fun. That’s what makes it so special.”