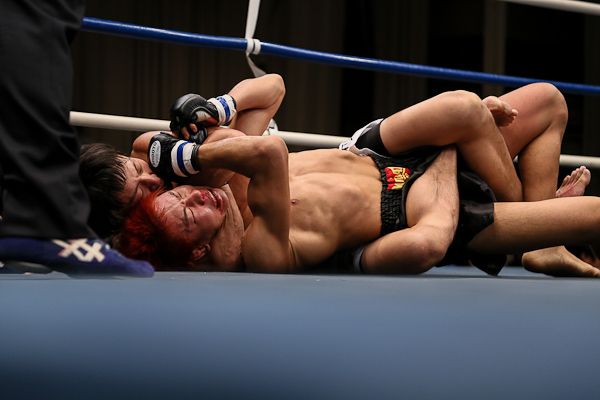 It took the lanky brawler only six and a half minutes to put challenger Junji Ito to sleep with a rear-naked choke at Shooto “10th Round” before a packed house inside Korakuen Hall. Yamagami earned the title last November by besting former champion Junji Ikoma with a lightning-fast knockout, but this time, the champ wanted to prove that he could work on the ground as well. 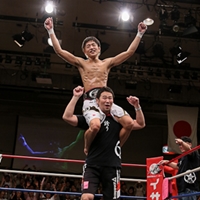 Taro Irei
Yamagami celebrated his first defense.
“I think Ito wasn’t expecting me to try to grapple with him, and I took advantage of that,” Yamagami said after the bout.

The opening frame was an all-standing affair, with both fighters bouncing in and out of range, winging quick hooks to the head. Yamagami caught kicks to the groin both early and late in the round, but moved on with his usual lightning speed, dodging Ito’s power shots to reply with quick combos of his own.

In the second round, the challenger came out swinging and landed a fast combo to the champion’s head, but Ito got overconfident and found himself being taken down after getting too close. As Ito tried to recover, Yamagami got behind him and started to throw punches before sinking his hooks in for the back mount. After a momentary tie-up with the ring ropes, Yamagami pulled his opponent backwards and locked on a tight rear-naked choke. Ito held on for as long as he could, but nevertheless succumbed to inevitable unconsciousness, forcing referee Toshiharu Suzuki to stop the fight at 1:36 of the second round.

After his win, Yamagami expressed his desire to head overseas and join the ranks of the UFC, implying that he would be willing to move up about 10 pounds in weight and fight in the UFC’s flyweight division. 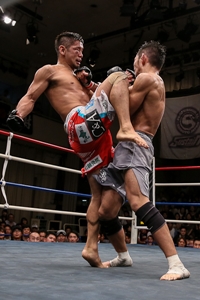 T. Irei
Ishiwatari (left) and Uno went at it.
Prior to the night’s main event, UFC vet Caol Uno and Pancrase champ Shintaro Ishiwatari brought Korakuen Hall to a deafening roar in their 143-pound bout that was all action from the opening bell.

Uno maintained constant pressure throughout the entire match but could not keep up with the younger, smaller fighter. Ishiwatari, who moved up from bantamweight for the bout, seemed unperturbed by the size difference, slamming Uno with huge power bombs and suplexes on multiple occasions.

Ishiwatari used his speed to move in and out of Uno’s range, peppering the legendary Shooto fighter with crisp combos and avoiding takedowns while scoring takedowns of his own. Uno came close with a few classic “Kadowaki Special” rear-naked chokes, with seemingly all of the packed hall cheering him on, but the game Ishiwatari managed to escape every time. Both fighters spent the final two minutes of the fight at full throttle, annihilating each other with an endless flurry of punches, kicks, takedowns and reversals. In the end, all three judges scored the technical brawl in favor of Ishiwatari, with scores of 29-28 (twice) and 30-27. 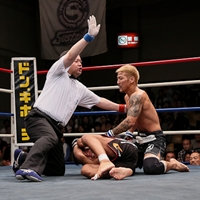 T. Irei
Osawa mashed the elder Abe.
In an odd, but quick 143-pound bout, AACC team leader Hiroyuki Abe took on former Sengoku prospect Shigeki Osawa. Abe opened up the match by taking center and standing stone-faced with his hands at his sides, while Osawa confusedly stood out of range. While tentative at first, Osawa slowly opened up, throwing hard shots at Abe’s head and stomach. Abe seemed unfazed by the hard hooks at first, but late in the round was finally hit by a right hand which put him down. Osawa pounced and threw a few hammerfists before referee Suzuki dove in and called a stop at 4:12 of the first round.

At 168 pounds, Yukinari Tamura took a close win over Kenta Takagi after three rounds of clinch work. “Hibiki” finally broke the stalemate in the final minute of the match, getting a takedown and taking mount before raining down heavy punches on Takagi. All three judges scored the bout in favor of Tamura.

Onetime rookie champion Kosuke Suzuki had a close, exciting fight with Masumi Tozawa in their 123-pound matchup. Despite the efforts of “Rambo” Suzuki to use his superior strength and power to control Tozawa, the Grabaka product showed technically superior grappling, popping back to his feet and reversing Suzuki on multiple occasions. In the second round, Tozawa spent some time cranking on an omoplata and managed to get a fully-extended armbar before being cut short by the bell. The razor-close armbar sealed the fight for Tozawa, earning him scorecards of 20-19, 20-18 and 20-18.

The younger Abe brother, Masatoshi Abe, made easy work of Takeshi Saito at 123 pounds, stuffing his opponent’s persistent double-leg attempts and pounding on his head. Abe spent a few minutes pancaking Saito before realizing he could finish, but eventually pounded his opponent out 4:37 in round one.