Prior to the bout, Izumi promised to show a newly designed “signature technique” dubbed the “Izumi harpoon,” making reference to his family industry of tuna fishing. However, there was little evidence of said punch, let alone a significant amount of offense from the judoka during the bout.

Izumi’s tentativeness saw him giving most of the first round to Zikic, who outboxed the neophyte mixed martial artist. Izumi surged late, though, finishing the last minute of the period by getting the takedown and grinding away at the Brit from above.

The second stanza saw more punches coming from Izumi, many of which were bunched together in infrequent flurries and staccatos of winging overhands. Zikic continued to land straighter single punches of his own but took his fair share of lumps from Izumi’s sporadic attacks.

The third frame saw much of the same patterns of the first and second repeated, but again, it was a late Izumi surge that saw the judoka on top of Zikic by the final bell, putting his stamp on the bout. As such, judges Samio Kimura and Minoru Toyonaga saw the bout 30-29 for Izumi ; the lone dissenting judge, Takashi Kobayashi, cast a 30-29 vote for Zikic.

After the match, Izumi called out 2008 Olympic judo gold medalist Satoshi Ishii, provided that SRC and Dream cooperate once again on New Year’s Eve. Seeing as SRC officials announced the promotion’s New Year’s efforts were aimed at Dec. 30 at the Ariake Colosseum, however, the potential for an SRC-Dream co-promotion for K-1 “Dynamite” seems unlikely. 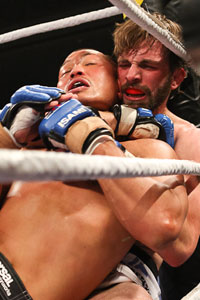 
Meanwhile, UFC veteran Brian Cobb earned a narrow split decision over former Deep lightweight champion Kazunori Yokota. Weighing in 6.6 pounds over the limit, Cobb was only cleared to fight after making weight at 157.2 pounds and having his opponent sign off on the match at 9:30 p.m. on Friday.

Entering the fight with a 30-percent penalty to his purse, as well as a point deduction for his weight indiscretions, the chips were certainly stacked against Cobb. The American thus rose to the occasion, chasing down Yokota in the first round with repeated takedowns and top and back control.

The second period was better for the Japanese fighter, however, as Yokota racked up leg kicks and took his turn at controlling and smashing from top position. A limping Cobb dug deep and resurged in the third, taking Yokota’s back to threaten with the choke, as well as briefly dropping punches from mount.

While judge Kenichi Serizawa scored the bout 30-29 for Yokota, Toyonaga and Tomoki Matsumiya and ruled it a 28-28 draw, with the must decision going to Cobb.

In the 2010 Sengoku welterweight grand prix semi-finals, Keita Nakamura forced sambo specialist Takuya Wada to eat his words by locking up a topside crucifix and pounding on him until he submitted 3:30 into the first frame. Meanwhile, Yasubey Enomoto rib-roasted, outboxed and out-finessed Taisuke Okuno over three rounds to net a lopsided unanimous decision. Enomoto and Nakamura advance to the final, set to take place at Sengoku’s Dec. 30 event.

The semi-final matchups, also booked for Dec. 30, were announced afterward: Tamura vs. Nakahara and Shimizu vs. Inoue.

Finally, Kazuo Takahashi needed just 2:28 to submit Chang Seob Lee with a first-round armbar. The victory snapped a seven-fight winless streak for the 41-year-old Takahashi, a Pride Fighting Championships veteran whose care dates back to 1993.