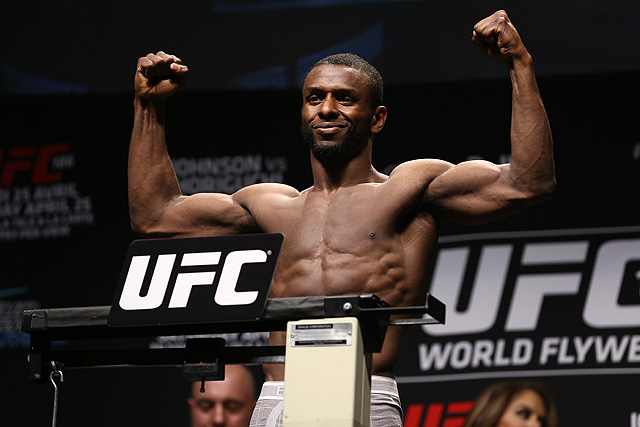 Yves Jabouin will return to the Octagon on Aug. 23. | Dave Mandel/Sherdog.com


Two matchups have been added to the UFC’s Aug. 23 trip to Saskatoon, as Yves Jabouin meets Felipe Arantes at bantamweight, while Chris Beal takes on Chris Kelades at flyweight.

The UFC confirmed the bouts following an initial report from The StarPhoenix. UFC Fight Night “Holloway vs. Oliveira” takes place at SaskTel Centre in Saskatoon, Saskatchewan, Canada, and is headlined by a clash between featherweight contenders Max Holloway and Charles Oliveira.

Jabouin, 36, has alternated wins and losses in his last six fights. The Montreal native last appeared at UFC 186, where he suffered a first-round technical knockout loss to Brazilian prospect Thomas Almeida. “Tiger” is 5-4 since making his Octagon debut in 2011.

Arantes has lost two of his last three bouts, including a unanimous decision defeat to Andre Fili in his most recent appearance at UFC 179. The 27-year-old Brazilian is 3-3-1 during his seven-fight UFC tenure.

Beal suffered his first defeat in 11 pro fights at UFC on Fox 14, as he dropped a unanimous verdict to Neil Seery at UFC on Fox 14. “The Real Deal” earned victories over Patrick Williams and Tateki Matsuda in his first two promotional appearances.

A native of Dartmouth, Nova Scotia, Canada, Kelades is 1-1 in the Las Vegas-based organization. The 34-year-old debuted with a decision triumph over Patrick Holohan last October before tapping to a Ray Borg kimura in the third round at UFC Fight Night “Henderson vs. Thatch.”