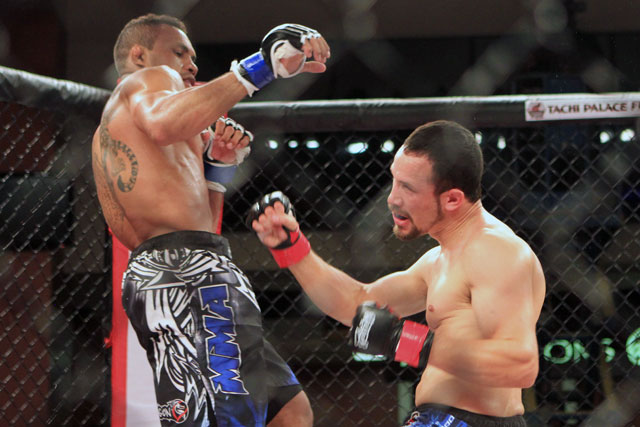 
Occasionally in mixed martial arts, failed weight cuts can alter a title fight. That was the case with the bantamweight pairing of Rolando Velasco (10-3) and Fabiano Silva da Conceicao (25-6-1) in the Tachi Palace Fights 22 headliner on Thursday night.

“Jacarezinho” came into weigh-ins on Wednesday nearly 10 pounds overweight, forcing the promotion to rule that only Velasco could leave the Tachi Palace Hotel and Casino in Lemoore, Calif., with the belt.

In the end, the added weight might have made a difference. The opening frame was mostly a feeling-out process for both fighters. At one point, Silva threatened his opponent with a rear-naked choke, but “The Machine” persevered. The second round saw Silva drop Velasco with a straight right, which the 26-year-old immediately followed with punches, forcing the hand of referee Jason McCoy. The finish officially came 1:28 into round two.

After the fight, Silva had nothing but praise for his opponent and apologies for anyone he affected by missing his required mark of 135 pounds.

“I did my best and I want to apologize for not making weight,” Silva said. “Tachi is the best promotion I have ever fought for, Rolando is the best opponent I’ve ever fought, so I’m looking forward to coming back here and doing it again. 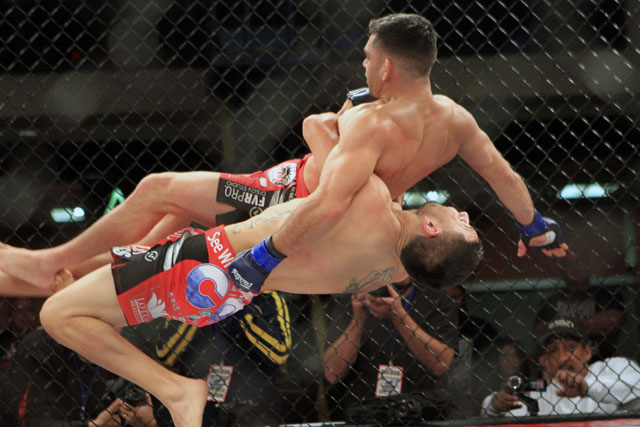 The co-main event featured a flyweight title fight pitting Alex Perez (12-2) against Anthony Figueroa (10-8-1). In the end, “The Decision” reiterated his nickname, walking away with a unanimous nod over Figueroa to capture 125-pound gold. It was the ninth consecutive win for the 22-year-old Team Oyama representative.

The 25-minute contest featured plenty of back-and-forth grappling exchanges, and while Figueroa had his moments, it appeared that Perez’s efforts in the early frames were enough to sway the judges. As was the case throughout the night, no scores were revealed.

“I think I did good. I listened to my coaches and followed my game plan,” Perez said after his win. “Hopefully the UFC is next. I’m just waiting; I want to eat.” 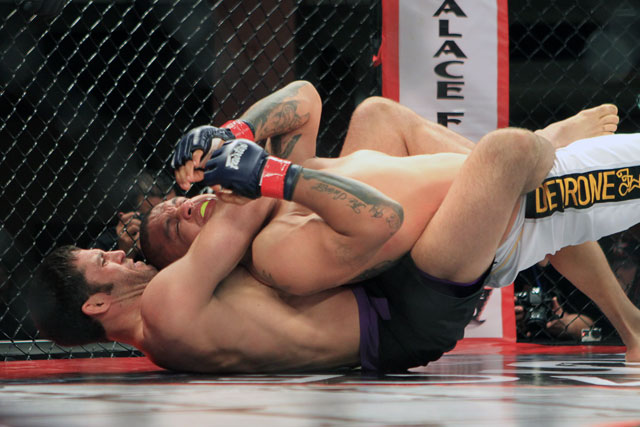 (+ Enlarge) | Photo: J. Sherwood/Sherdog.com
Mitchell easily tapped DeAnda.
In the first title bout of the evening, David Mitchell (18-4) made the case that he could potentially deserve a second look in the UFC. From the start, “Bulletproof” imposed his will against Angel DeAnda (12-5), ultimately going palm to palm and forcing DeAnda to tap to a rear-naked choke 3:00 into the opening round. As a result, the former UFC competitor laid claim to the Northern California-based promotion’s middleweight title.

“I train with the best in the world, you just can’t stop that,” Mitchell said after the fight. “It’s not only about UFC to me; it’s about me becoming the best mixed martial artist I can be.”

With the win, Mitchell has now won six consecutive bouts since dropping back-to-back fights against Mike Pierce and Yan Cabral under the UFC banner in 2013.

Earlier, Tony Llamas (14-15) took a unanimous decision over Sergio Cortez (9-11) in a lightweight contest. In a bout that featured multiple cage grabs, referee standups and saw Cortez eat plenty of punishment, Llamas walked away with his third straight win.

After the fight, which marked his fourth win under the TPF banner, Llamas made it clear that he has been anxiously awaiting a shot at the promotion’s lightweight championship. When asked if he had done enough to earn a shot, “Nuno” had a succinct response: "I been ready,” he said.

Castle Williams (2-1) became a bit complacent in the third round of his featherweight encounter with Brandon Cohea (3-1), and as a result, he will head back to San Luis Obispo, Calif., with the first loss of his career. Cohea proved to be a stern test for Williams, a highly-regarded prospect, and was ultimately awarded a unanimous decision.

The fight was close, but particularly in the third stanza, “Lionheart” lived up to his nickname and nearly submitted Williams on numerous occasions, likely earning the benefit of the doubt from the three California State Athletic Commission-appointed judges. Williams was visibly displeased with the decision, but at only 22 years old, he will have plenty of time to bounce back.

Over the course of 15 minutes, Enoch Wilson (19-9-1) used his wrestling pedigree to grind out a unanimous decision against Diego Saraiva (22-18-1) in a catch-weight fight. While no scorecards were read inside the arena, it was a clear cut victory for the former Team Quest member. “The Octopus” nearly grabbed the 15th submission win of his career late in the third frame when he sunk in an armbar, but Wilson managed to escape and earned only his second-ever win via decision.

Aaron Arana (5-1) destroyed the body of Sergio Quinones (8-16) en route to a first-round technical knockout victory in a featherweight scrap. Arana, who had not competed for five years, pounded the liver of his opponent and with each passing strike, Quinones seemed to be feeling the effects. The finish came at 4:17, when “The Outlaw” was dropped to a knee with a kick to the body. Quinones has only been victorious once in his last nine bouts.

Richard Parra (1-0) made a huge impression in his mixed martial arts debut against Drake Boen (2-2), knocking out his opponent a mere six seconds into their bantamweight clash. After ducking a punch, The Pit product connected with an overhand right that spelled the end for “Sticks and Stones.”

Ladale Noa (2-1) used an aggressive striking game to press Salvador Becerra (3-0) against the cage early, but over the course of the final two rounds it was the pinpoint striking and submission attempts by the 19-year-old Becerra that ultimately earned him a split decision. Judges’ scorecards for the catch-weight affair were not announced.

In the evening’s opening bout, Jordan Williams (3-1) utilized ground-and-pound to pummel Christian Barber (0-2) and earn the stoppage from referee Mark Lawley at 1:14 of the first round in a welterweight matchup.