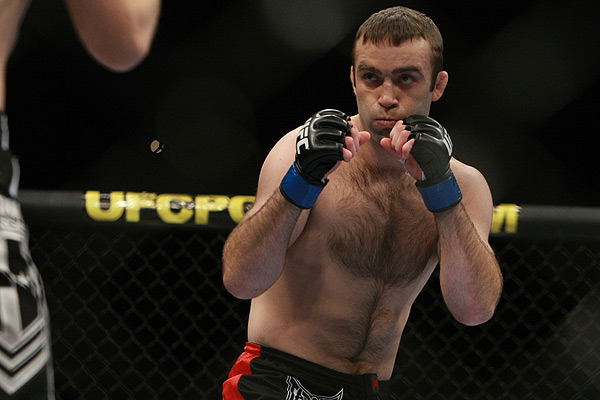 Jacob Volkmann came out kicking against Shane Roller in their Oct. 5 matchup at UFC on FX 5, and he feels the unexpected strategy helped him score his first finish in the Octagon.

In a recent interview with the Sherdog Radio Network’s “Beatdown” show, Volkmann discussed his win, how he would have done in a presidential debate and more.

On fighting in his home state of Minnesota: “It was pretty nice hearing everybody cheer for me when I walked out, and especially they were on their feet cheering when I submitted him.”

On opening the fight with kicks: “I think the thing that changed the whole fight, that made the fight go my way, was right off the bat, I kicked him in the head. It did hit him in the head, and he kind of gave me this look like, ‘Where the heck did that come from?’”

On where his kicks and punches came from: “I’ve been kicking for a while. It was just a matter of time for me to open up my hands.”

On whether fans should expect him to deliver a knockout soon: “That’s the goal. Why not? It would be nice to get a knockout.”

On whether the win over Roller erased the memory of his loss to Paul Sass: “No, it definitely doesn’t erase the memory. I’m probably never going to let that memory go just because I made a stupid mistake, and that’s something I have to deal with, but it’s going to help me. It’s going to make me stay focused in the next fights. It’s not a total negative thing that happened.”

On why he always feels that his back is against the wall: “I think I read too much Twitter. I’ve got a lot of haters on Twitter. I don’t know. It’s getting to my head, I think. I hate Twitter.”

On why he’s active on Twitter: “I have to. There’s a lot of fans on Twitter. I like those guys, but you always get a negative person who tries to beat you down.”

On whether he’s himself in interviews or playing a character: “I say what’s on my mind. My teammates always say that I’m a little too forward. That’s me.”

On whether he’s marketable: “I have no idea. You tell me. I don’t know anything about marketing.”

On whether he would have won a debate against Barack Obama and Mitt Romney: “No. No. Some of that stuff, I had no idea what they were talking about. ... Most of the stuff I understood, but there was some stuff, I was like, ‘What in the heck?’”

On how Dana White would do as president of the United States: “I think he’d do a decent job because he’s all business. He’d get rid of the unnecessary spending a lot better than the other two are.”

Listen to the full interview (beginning at 34:45).