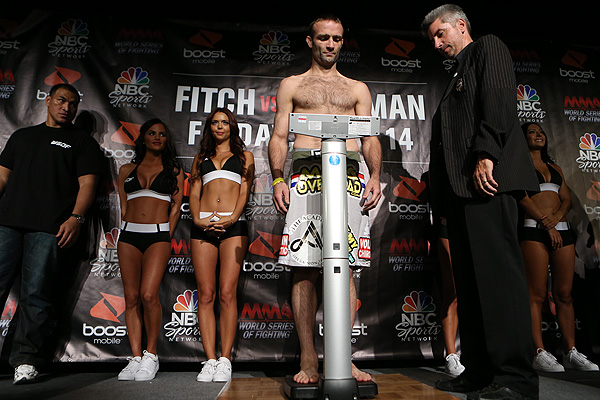 
Jacob Volkmann isn’t expecting any surprises from Luiz Firmino when they meet Saturday in a lightweight bout at World Series of Fighting 6. The WSOF 6 undercard streams live and free on Sherdog.com.

In fact, he believes Firmino will use the same strategy as Lyle Beerbohm, whom Volkmann outpointed in June.

“I watched about 20 minutes of his fights,” Volkmann told the Sherdog Radio Network’s “Beatdown” show. “It’s pretty much the same. He’s going to come in just like Lyle Beerbohm. He’s going to try to take me down to the ground and do the ground game with me, ground-and-pound, but he sits inside the guard. He doesn’t do anything on the ground.”

Volkmann had little trouble with Beerbohm, but it was his disclosure that he’d passed out the day before the fight that stole the headlines. The 33-year-old said he was taking a nap in his hotel room after cutting weight and got up too quickly to answer the door. The next thing he knew, he was in the floor, having what he described as a seizure.

Of course, Volkmann went on to win his bout, but he caught some criticism for fighting without disclosing the incident to the Nevada Athletic Commission. He doesn’t think passing out was nearly as big a deal as others seem to think.

“It’s a little ridiculous,” Volkmann said. “… They just don’t understand. They’ve never cut weight and they assume that it’s a bad thing. Really it’s not that bad. I just got up too fast and I got lightheaded and I couldn’t catch myself. … That’s very common for anybody losing weight. [If] you get up too fast from laying down, you stand up, you’re going to get lightheaded. The more weight you lose, obviously the worse the effect is.”

Four months later, Volkmann will be back in the cage against Firmino.

“He’s not a dangerous guy, except for he throws these hooks, these overhand hooks that can get kind of dangerous,” Volkmann said. “They get you in the side of the head and the back of the head, but his standup’s not the greatest. His ground game is average.”

While Volkmann doesn’t sound too impressed with his opponent, he does see the bout as an opportunity.

“Obviously I’m going to try to stay standing with this guy,” he said. “I want to work my standup because that’s his weakness. I have a longer reach than him. I’m taller than him, so I’m going to try and work the standup and the kicks. That’s the goal for this. If he wants to go to the ground, fine, I’ll take him down. I’ll let him try and grab my legs, let him burn some energy out there.”