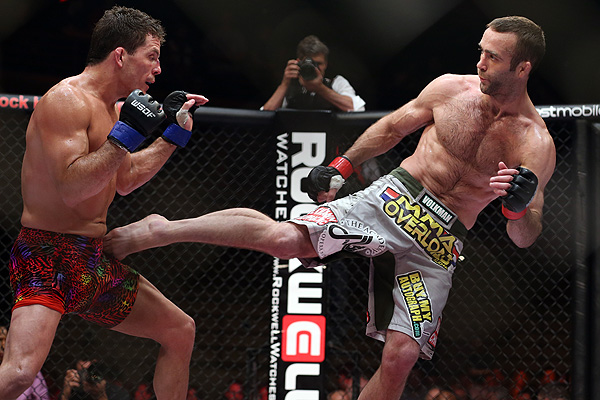 One day prior to his debut in the World Series of Fighting, Jacob Volkmann took a fall -- not on the mat, but in his Las Vegas hotel room.

According to the lightweight, he was taking a nap prior to the WSOF 3 weigh-in when a knock at the door caused him to stir. Dehydrated from cutting weight, Volkmann arose and walked across the room to answer the door, only to soon find himself in a much different state.

“The maid knocks on my door and keeps on knocking, and I [thought], ‘I’d better not get up too fast.’ So I got up and walked toward the door, and by the time I got my hand on the door, I blacked out,” Volkman told TJ De Santis during a Wednesday interview on “Beatdown” on the Sherdog Radio Network. “Next thing I remember, I was shaking on the floor, having seizures.”

Volkmann, who defeated Lyle Beerbohm in a unanimous decision at the June 14 event, surmised that the large scratch on his back clearly visible during his bout came as the result of his fall the day prior.

“I banged my head, and I must have hit my back on the door handle,” Volkmann said. “I didn’t tell anybody, because I didn’t want them to say I couldn’t fight because I just had a seizure. I had bills to pay, so I really didn’t have a choice.”

Sherdog.com verified with Nevada Athletic Commission Executive Director Keith Kizer that Volkmann made no mention of the incident to the regulatory body ahead of his bout at Hard Rock Hotel and Casino. Volkmann, a licensed chiropractor in his home state of Minnesota, performed a self-assessment and felt he was no worse for wear.

“Mentally and physically, I felt fine. I didn’t feel cloudy. I kind of did a self-analysis based on my medical background. I just wanted to make sure that my cognitive was there and my mental state was up to par,” said Volkmann. “I was mentally able to fight, still. The thing about chiropractic education is that the first two years are the same as an M.D.’s education. You just branch off after two years.

“It was a byproduct of being dehydrated. I don’t think I need a CAT scan or [anything],” Volkmann continued. “There’s nothing cloudy. My memory is fine. I don’t feel sluggish at all. I’m good to go.”

With the incident and his victory over Beerbohm now behind him, Volkmann hopes to return to the WSOF cage sooner rather than later.

“Ideally, [I would fight again] in three months, but their August and September cards are full, at least that’s what [matchmaker] Ali [Aziz] told me,” said Volkmann. “So, hopefully [I’ll be back] in October. If somebody drops out, I’ll try to get a short-notice fight. I would love to get back in there in two months if I could, but we’ll see.”