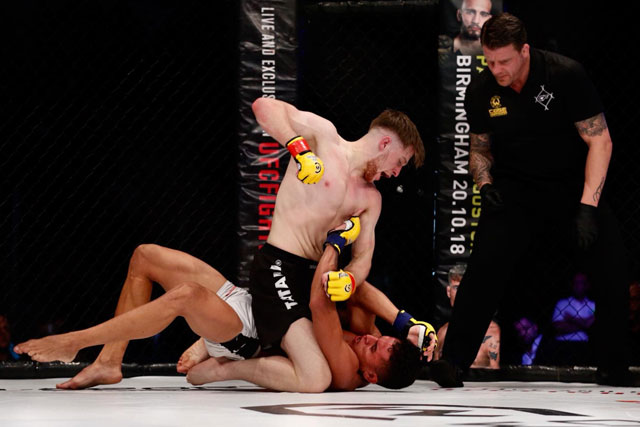 The Welsh revolution is taking Cage Warriors by storm.

In the main event of Cage Warriors 97, Welshman Jack Shore won easily in a risky fight against Weslley Maia at Ice Arena Wales in Cardiff, Wales, on Saturday. Maia, a native of Brazil, flew to Cardiff on short notice after Shore’s originally scheduled opponent, Omer Cankardesler, was removed from the card due to a failed medical examination. The bout was contested at featherweight in instead of bantamweight, Shore’s normal weight clash.

This is not the first time Shore had an opponent changed at the very last minute. This evening, as usual, the Welsh prospect maintained his calm and earned a technical knockout victory with a barrage of elbows and punches from mount at the 2:51 mark of round one. Now, Shore, whose record improved to 9-0 , wants the vacant Cage Warriors bantamweight title.


Jack Shore was on FIRE

Elsewhere, Mason Jones put on a show against Poland’s Kacper Formela in the evening’s co-main event. The Polish fighter started strong against the local hero, but the Welshman utilized his striking skills to make a huge comeback. Jones ended the fight with some brutal knees to the body to stop at the 4:03 mark of round one. “The Dragon” improved his record to 6-0, with all but one of his victories coming inside the distance.


What a comeback! @MasonJones1995 is the real deal #CW97 pic.twitter.com/BjpvTz4ddK