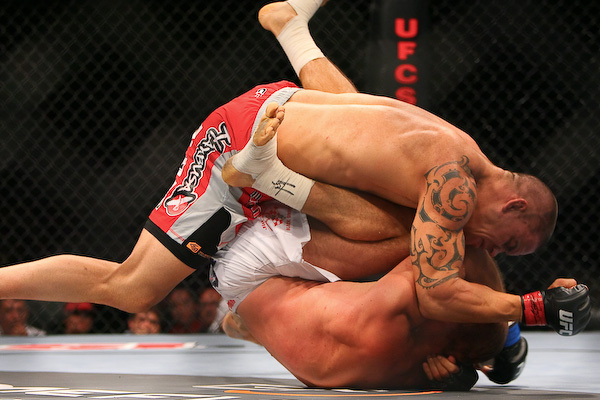 James Te Huna may have walked away from UFC on Fuel TV 4 with a unanimous decision over durable veteran Joey Beltran, but by no means did he leave the HP Pavilion in San Jose, Calif., unscathed.

The native New Zealander revealed after the hard-fought contest that he had broken his left hand and one of his feet during the first five minutes of his three-round battle with the former heavyweight.

“Broken hand, broken foot -- I ain't gonna do much with that, but I thought I hit him pretty well,” Te Huna said at the post-fight press conference. “I thought I did well for three rounds with what I had.”

Te Huna was dominant in the first frame, despite injuring two of his four appendages, finding a home for his right hand often against Beltran, who managed to absorb several blistering blows without hitting the canvas.

“I was surprised,” Te Huna said. “I hit him with some of my biggest shots.. I lined them up and threw them as hard as I could. I tried to stay on his tail and put pressure [on him], but I couldn't get him down.”

Eventually, however, Te Huna managed to drop the ex-heavyweight, blasting Beltran with a vicious left hook in the round's final minute. The 30-year-old tried his best to finish the fight, but ultimately Beltran was able to hold on to see a second round.

The final two frames would not contain the same type of action from Te Huna, who was feeling the effects of his aforementioned injuries. Nevertheless, he moved forward, threatening with his right hand and taking Beltran to the mat on multiple occasions.

“I noticed [my injuries] toward the end of the first round. In the second round, I felt every bit of it, every time I stepped on that foot or used my jab,” said Te Huna. “I had to play it smart and try to get ahead on points.”

Though Te Huna says that his broken hand and foot did hinder his performance slightly, the light heavyweight also credits his opponent for his well-documented toughness.

“[The injuries] didn't take a lot out of my game, but it did affect my performance a little bit,” said Te Huna. “Take nothing away from Joey, though. He's tough as nails. He took some real big punches. I threw them as hard as I could, and he weathered the storm. I've done a lot of research on him, and he's a real hard worker. I knew he was going to be hard to finish, and it was going to be a war.”

The win marks the third consecutive victory for Te Huna, who has finished two-thirds of his career victims by knockout. Now a winner in four of his five Octagon outings, Te Huna says he will take on anyone the UFC asks him to face.

“I'm just taking it step by step, and whoever they match me up with, I'm going to work on that and up my game and try to get better,” he said. “I just have to fight better people and jump up to the next level.”