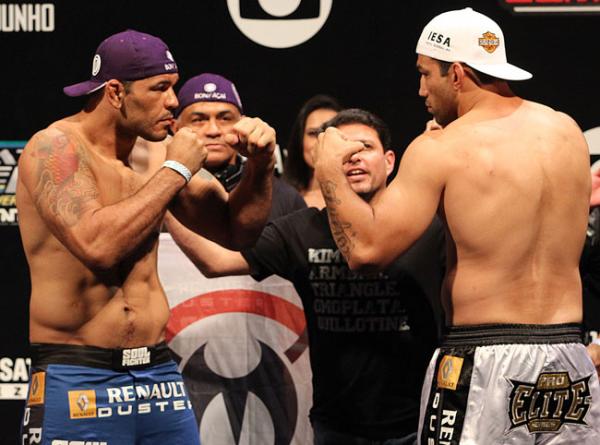 Antonio Rodrigo Nogueira suffered the second submission loss of his career when Fabricio Werdum caught him with an armbar Saturday at UFC on Fuel TV 10.

Brazilian jiu-jitsu black belt Javier Vazquez counts himself as a fan of “Minotauro,” but he believes his best days are behind him. In an interview with the Sherdog Radio Network’s “Beatdown” show, Vazquez discussed Nogueira’s loss and more.

On Werdum’s submission of Nogueira: “I was really impressed by [Werdum’s] movement and his transitions and some of the things he was doing as far as blocking Nogueira from circling after him. He looked great. Werdum definitely looked like the real deal on the ground, but it just seems like Nogueira’s kind of stayed the same. It just looked like two different caliber of guys on the ground.”

On whether technique declines with age: “No, I think your technique actually gets better … . It seems to me like Nogueira for a while there was quite ahead of all the heavyweights. He was playing a pretty basic game and he was kind of getting away with it until he ran into Fedor [Emelianenko]. The guys he was fighting weren’t great submission guys. The two submission guys that he fought, he got tapped, which is a little bit odd to me.”

On Nogueira’s strategy: “I cannot stand deep half guard for MMA. It’s a sport move. It’s a sport jiu-jitsu move which I cannot stand. I’ll never do it in a fight. If you’re going to do it, you’ve got to kind of get in and get out. If you don’t get the guy over, you’ve got to kind of let go of the leg and come back to square one. [Nogueira] tends to hang on to it and fight for it, and Werdum was just doing all the right things to neutralize it. You can tell Werdum definitely was drilling the defense of that, but Nogueira just had no plan B. He wasn’t working on putting the feet on the hips and pushing him off and getting up to his feet or using the wall to get up to his feet. He just basically got outhustled on the ground, which to me, that has nothing to do with age as much as who is really pushing Nogueira and who’s really tapping Nogueira in the room? That’s my question.”

On Nogueira’s skill at this point in his career: “Werdum was bigger and he seemed to have much better technique as well. It was kind of a double whammy for [Nogueira]. I’m a huge Nogueira fan and I don’t want to make this sound disrespectful, but it kind of makes me question where his level is because the two submission guys that he’s fought tapped him. It wasn’t that they controlled him. It’s that they both tapped him.”

On why Nogueira tapped when he did: “I think Werdum just had really good control on [the arm]. I think [Nogueira] got stuck in that belly-down position and it’s kind of hard because if Nogueira would have jumped over Werdum’s head with his legs, he would have ended up flat on his back. I kind of think he was trying to bide his time and maybe work his way out, but little by little, Werdum kind of muscled the arm out. When you get caught in an arm lock, sometimes guys don’t move and don’t resist because they’re afraid if they move, it’s going to get deeper. If he tries to move, he would have gotten rolled over and ended up in a worse spot. That’s what it kind of seemed like to me because I was like, ‘Yeah, step over,’ but so many times when you step over, you end getting rolled over to your back. That could have been part of the problem as well. I think he just got caught and didn’t want to move to make things worse, and by not moving, things got worse.”

On whether Nogueira should retire: “You have nothing else to prove. He’s considered one of the greatest heavyweights of all time. He’s a former world champion. He’s made a lot of money. He’s got a ton of guys that love him, that will keep representing his brand, which is that Minotauro brand and the Minotauro gym. … He’s a guy that’s taken a tremendous amount of damage in his career. He’s had a very long career. He’s had a long career at the highest level. … He could only go down is what I’m saying. All you’re doing is continuing to do damage to your body, and it’s not even in the fights. You’ve got to remember what does damage to your body is the camp leading up to the fight. … He doesn’t need to do it. He’s got to really look at his career and think about it.”