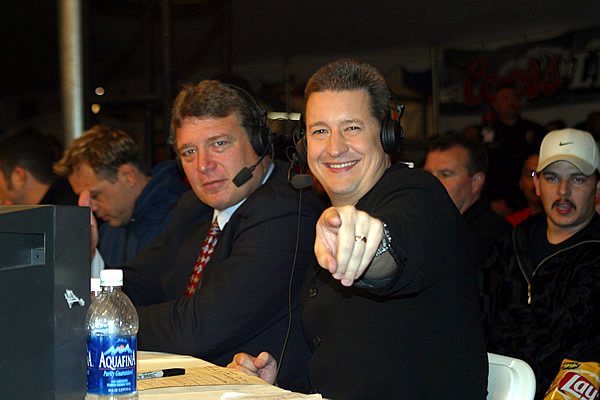 Jeff Blatnick (left) was a key figure in the UFC’s growth. | Jeff Sherwood/Sherdog.com


The UFC’s revamped Hall of Fame has its first two inductees.

The Las Vegas-based promotion announced on Wednesday that Jeff Blatnick will be enter the contributors wing, while the UFC 52 rematch between Matt Hughes and Frank Trigg will be enshrined in the fight wing. Blatnick and Hughes-Trigg 2 will be inducted into the Hall of Fame at a special event on July 11 as part of the UFC Fan Expo.

Earlier this month the UFC updated its Hall of Fame concept , announcing that inductees could qualify in one of four categories: Modern era, pioneers, contributors and fights. The contributors wing commemorates significant contributions outside of active competition, while the fight wing honors the greatest and most important bouts in the sport’s history.

The inductees for the modern era and pioneers era categories are expected to be announced this weekend during UFC 187, according to a release.

Blatnick was a key figure in the early days of the UFC’s evolution. An Olympic gold medalist in Greco-Roman wrestling in 1984, Blatnick represented his country just two years after being diagnosed with Hodgkin’s lymphoma.

He would later join the UFC as the organization’s lead commentator from UFC 4 until UFC 34 – a span of approximately seven years. Blatnick also served as UFC commissioner from 1998 to 2001 and is widely credited for coining the term “mixed martial arts” during that time. Prior to that, MMA was often referred to as “no holds barred” fighting.

More importantly, Blatnick was part of the group that drafted the original Unified Rules of Mixed Martial Arts. Later, he served as a cageside judge for several different state athletic commissions. Blatnick last judged UFC 152 on Sept. 22, 2012. He died at age 55 a little more than one month later on Oct. 24, 2012.

“Jeff Blatnick is a name that newer fans may not be familiar with, but this guy was a huge part on the UFC’s development in the 1990s,” UFC President Dana White said in a release. “He pushed for greater regulation, unified rules and -- because he was an Olympic gold medalist in wrestling -- he had credibility with everyone in the sport. It is our honor to recognize his huge contributions to the UFC by inducting him into the UFC Hall of Fame.”

Blatnick’s widow, Lori Blatnick will attend the ceremony to accept her husband’s induction.

“Jeff would have been so honored to be inducted into the UFC Hall of Fame. It’s awesome, and it is right that he is recognized. He worked so hard to improve the sport and keep it alive in the 1990s,” she said. “People in the industry, or have been around the UFC for years, they know what Jeff did behind the scenes but the viewers who watch the fights today probably haven’t heard of him. That’s probably because of Jeff’s character. He was very humble and didn’t like to talk about himself. But it is great he will now be recognized in such a huge way.”

Meanwhile, Hughes defeated Trigg via rear-naked choke 4:05 into the first round of their rematch at UFC 52 on April 16, 2005 to retain his welterweight title. Early in the bout, Trigg caught his opponent with an accidental low blow that the referee did not see. Trigg capitalized on the foul and had Hughes reeling, hurting him with punches and ground-and-pound before attempting a rear-naked choke. When Hughes escaped, he authored one of the sport’s more memorable images when he picked Trigg up, carried him across the Octagon and slammed him to the canvas. Shortly thereafter, Hughes forced Trigg to tap out with a rear-naked choke of his own.

“When I got my hand raised, I thought I’d just come through a tough fight. It was only afterwards, when my team were congratulating me on this great win, that I started to realize this wasn’t just another fight,” said Hughes, who was already inducted into the Hall of Fame as an individual in 2010. “Then Dana called me a few days later telling me it was the best fight he’d ever seen and, in the years since, I get asked about that one rematch with Trigg about as much as I do any big fight I’ve ever been in.”

Added Trigg: “This is a great honor. Every great fight has a winner and a loser, but I am very proud that, 10 years on, people still ask me about this fight. I may not have won the UFC title that night, but this goes some way to make up for that.”