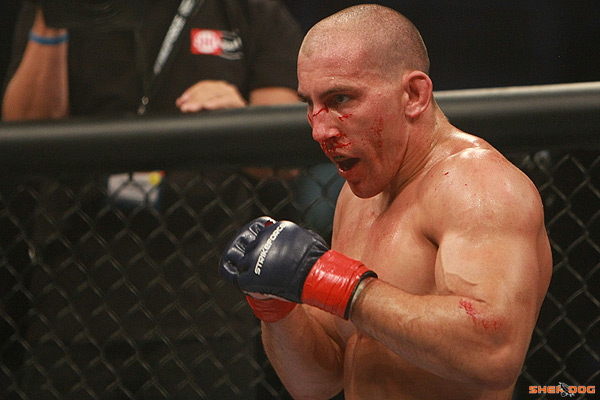 Jesse Taylor’s first Cage Warriors Fighting Championship middleweight title defense was in doubt for all of about seven seconds.

That’s how long it took for the Team Quest product to take John Phillips to the canvas in the CWFC 54 main event at the Motorpoint Arena in Cardiff, Wales, on Saturday night. It was academic from there, as “JT Money” gradually hammered away with strikes on the ground while looking to improve position against his overmatched foe. Once he saw an opening, Taylor jumped to a guillotine choke to elicit a tap from Phillips 2:43 into the first round.

“I can strike with the best of them, but if it’s not broke don’t fix it,” Taylor said. “I respected his power; I took him down. I was ready to go five rounds.”

Phillips, whose moniker is “The White Mike Tyson,” entered the bout with 13 knockout victories to his credit, but he had no opportunity to put his hands to use against “The Ultimate Fighter 7” cast member. Taylor, who captured the 185-pound strap with a triumph over Chris Fields in December, opened a cut near Phillips’ eye with elbows before locking in the submission.

“A year ago my career fell off track,” said Taylor. “I got it back. I want all the middleweights to know I’m coming for you.”

Danny Roberts held his own in Diego Gonzalez’s world. It was in his comfort zone, however, where Roberts was most impressive, as he earned the fourth knockout victory of his professional career in the second round of the evening’s co-headliner.

The Liverpool, England, native unloaded on Gonzalez with a flurry of punches against the fence, eventually dropping the Swedish fighter. Roberts then pounced on his fallen opponent, finishing the welterweight contest with strikes on the ground 3:02 into the second stanza.

Roberts, a 6-foot tall southpaw, had a decided edge on the feet, as he was able to consistently land combinations at range. Gonzalez scored his first takedown of the fight about halfway through the opening frame, but Roberts was able to power to his feet and land some knees in the clinch.

In the second round, “Hot Chocolate” sprawled on an early Gonzalez takedown and cinched in a guillotine choke. After giving up on the maneuver, Robert attempted to take Gonzalez’s back in a transition, but wound up on his back instead. “The Silencer” went to work with his suffocating top game and moved into mount. Roberts was able to explode to his feet once again, and he immediately began landing more knees in the clinch. Sensing the end was near, Roberts continued his assault with punches to force the stoppage.

Elsewhere, Lewis Long cruised to a unanimous decision over Mark Glover in a 160-pound catch-weight bout. All three cageside judges scored the fight 30-27 in favor of Long.

Glover was never able to match the offensive output of his opponent, as Long peppered him with crisp punching combinations and kicks to the legs and body throughout the 15-minute encounter. “The Foot” controlled the tempo, backed his foe against the cage on multiple occasions and displayed a good understanding of when to change levels with his strikes. Glover resorted to taunting Long in hopes of forcing a brawl, but “The Foot” never strayed from his technical approach.

A steady diet of takedowns and top control carried Ivan Buchinger to a hard-fought unanimous verdict (29-28, 30-27, 29-28) over Jason Ball in a lightweight contest. With the win, Buchinger rebounded from a first-round knockout loss suffered against current UFC talent Conor McGregor on New Year’s Eve.

Buchinger took a grinding approach in the opening frame, pressing Ball against the fence while working knees and short strikes in the clinch. The Slovakian displayed good timing on his takedowns throughout and he was the flashier striker as well, landing a couple of spinning backfists in the contest.. Ball was active from his back, sweeping and hunting for submissions, but it would not be enough.

Brett Johns used a steady barrage of ground-and-pound to earn a second-round stoppage of James Macalister in a 135-pound affair. Referee Rich Mitchell called a stop to the contest 3:23 into the period.

After a tentative start on the feet, both fighters exchanged takedowns and slams in a competitive opening round. Johns showed off his judo skills in round two, tossing Macalister to the mat before moving to his opponent’s back. “The Pikey” controlled the grappling from there, landing a steady barrage of hammerfists and elbows on his grounded foe. Johns gradually increased the intensity of his assault, unloading with increasingly harder strikes until the action was halted. Johns is unbeaten in six professional appearances.

In the first main card bout, Martin McDonough turned the tables on Mark Platts to earn a rear-naked choke victory 1:18 into the second frame of their bantamweight clash.

McDonough was the aggressor early, securing a body lock takedown and hunting for a guillotine in the bout’s opening moments. However, Platts escaped the hold and controlled much of the frame with moderate ground-and-pound. After a referee standup, Platts made McDonough stumble with a solid right hand and ended the period back on top.

Round two looked like it was going to be more of the same, as Platts pressed forward and landed a takedown. McDonough was able to utilize a nifty foot sweep to transition to his opponent’s back however, and in a matter of moments he had the fight-ending choke secured.

In preliminary action: Shajidul Haque took a split decision over Kris Edwards at flyweight; Matt Inman earned a third-round TKO victory against Leon Kenge at welterweight; Jamie Rogers captured a split verdict against Brad Wheeler at 155 pounds; Steve McCombe choked out Joe Orrey 1:48 into round three in a 139-pound catch-weight duel and Owain Parry submitted Rob Leybourne with a rear-naked choke 1:11 into round two at 170 pounds.