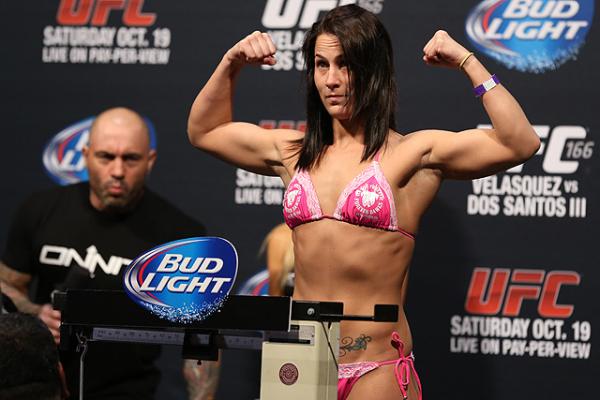 Jessica Eye will compete at UFC 170 as planned. | Dave Mandel/Sherdog.com


The Ultimate Fighting Championship and Jessica Eye released statements on Thursday concerning the fighter’s overturned victory at UFC 166, with both parties reiterating that the bantamweight will compete as planned on Feb. 22.

“The UFC received word of the fully-probated suspension and fine issued to Jessica Eye by the Texas Department of Licensing and Regulation,” the UFC’s statement read. “The UFC intends to honor the probation, which will not force Eye to miss her scheduled bout at UFC 170.”

Sherdog.com first reported on Feb. 1 that Eye’s victory over Sarah Kaufman at UFC 166 had been changed to a “no decision” by the TDLR. The following week, an administrative order dated Jan. 22 indicated that Eye “tested positive for a prohibited drug,” resulting in a one-year “fully-probated suspension” and a fine of $1,875. Sherdog made a records request with the TDLR in an attempt to confirm further details, but the request has not yet been answered.

“I was recently alerted to the fact that I was issued a fully-probated suspension and fine by the Texas Department of Licensing and Regulation,” Eye’s statement read. “While I intend to discuss with the Texas Department of Licensing and Regulation the overturning of my victory at UFC 166, I have accepted the terms of the probation and intend to compete at UFC 170 on Feb. 22. I pride myself on following the rules and representing my family, teammates, sponsors, and fans in the best light possible. I apologize for any distractions this has caused.”

Eye was originally awarded a split decision over Kaufman in their Oct. 19 meeting from Houston’s Toyota Center. Prior to that confrontation, the 27-year-old had won seven straight bouts to earn her opportunity in the UFC. Eye will now lock horns with Alexis Davis later this month, when the top-10 bantamweights do battle at UFC 170 from the Mandalay Bay Events Center in Las Vegas.