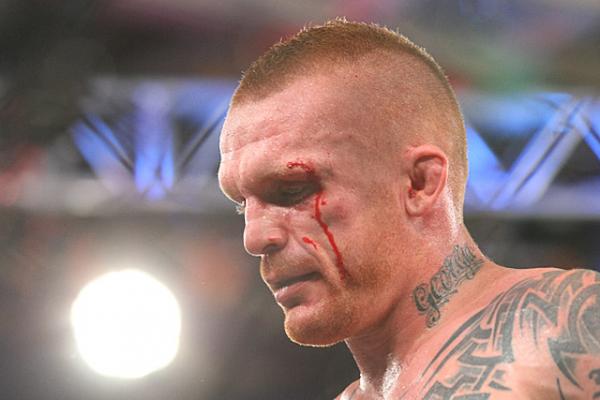 After notching notable wins over Frank Trigg and Joey Villasenor in the BAMMA cage in 2011, Wallhead fought just once in 2012, losing in the quarterfinals of Bellator's Season 7 welterweight tournament to Lyman Good. The 28-year-old looked anything but rusty in his return, dominating Veach from the outset. A short left hook inside dropped the American wrestler, seguing to a brutal display of ground-and-pound from the Team Rough House fighter.

Wallhead's punches and sharp left elbows slashed Veach open, his blood streaming all over the canvas. As a bloodied Veach panicked, Wallhead calmly took his back and went palm-to-palm, tightening a rear-naked choke for the submission win at 3:05 of the opening round.

“Things are improving. I've got the best behind me, a proper schedule, my mind set right, nutrition set right, this is the start of a new Jimmy Wallhead,” said the victorious Brit, now 24-7.

“I feel I'm in a great place right now, and for the first time in eight years as a professional, I feel I'm doing everything right.”

Warburton started soundly, grounding the Glaswegian and pounding away from half guard throughout the opening round. However, “The War” was in deep waters come the second stanza, where Ray was able to get his back, sink the body triangle in and threaten throughout the period, constantly looking for rear-naked chokes. The 32-year-old Wolfslair rep used his veteranship to survive and went back to his ground-and-pound tactics in round three, controlling position and punching away until the final horn.

Now 12-3, Warburton has won all five bouts since his release from the UFC following his June 2011 submission loss to Joe Lauzon.

The London-based Swede was thrown off his game early by Lazarz's determined wrestling, as the Pole, also now based in London, dragged the 24-year-old to the canvas repeatedly for the first 10 minutes, stifling Nunes' striking game. It looked like disaster might befall Nunes until Lazarz botched a throw from the clinch early in the third round and gave him top position. Nunes instantly seized the opportunity, unloading a gruesome battery of punches and elbows that forced referee Mark Woodard into action just 72 seconds into the final round.

Nunes has now finished all 10 of his pro opponents, with five knockouts and five submissions.

Sunderland's Ryan “Big Baby” Scope brought the partisan Tyne-Wear crowd to its feet with a thrilling comeback submission against “The Ultimate Fighter: The Smashes” alumnus Luke Newman, sinking a triangle choke on “Nukem” in the opening round.

Scope was in deep trouble early on as Newman, who splits his time between London's Team Titan and American Top Team in Florida, landing a potent knee to the liver that dropped Scope to his back. Newman pounced with heavy punches from the top position, yet Scope ably defended, avoiding the heaviest blows and tying up his foe. When Newman tried to unload with short elbows, Scope deftly threw his legs up for a triangle, quickly tightened it and earned the tap at an even four minutes of the first.

The triumphant turnaround sees Scope improve to 7-0, while Newman tastes defeat for the first time officially as a pro, falling to 5-1. Newman was defeated on “TUF: The Smashes” in exhibition action by eventual 170-pound winner Robert Whittaker.

Askham was originally set to face British veteran Kevin Thompson, while McLeman went through two slated-but-injured opponents in Wayne Murrie and Bola Omoyele, before the spate of pullouts forced the two men to square off at a 192-pound catch-weight. Askham was patient in his domination of McLeman, taking him down at will and achieving dominant positions. Late in the third frame, the Matrix MMA product got full mount and then back control, cinching a rear-naked choke for the win at 4:13 of the final frame.

Blackpool's Lee Barnes blew away Steve Watson in their middleweight affair. Barnes landing a crushing right hook that dropped the Sunderland native and then wrapped up a tight guillotine that forced the fight-ending tap just 47 seconds into the contest.

Scottish bantamweight upstart James Macalister dominated veteran and late replacement Steve McCombe from back control at a 139-pound catch-weight. The Dinky Ninjas fighter controlled the back of “Taz” throughout the first round before reclaiming the position in the second and earning the rear-naked choke at 3:08 of the round. Elsewhere at 135 pounds, Mahmood Besharate moved to 4-0, earning three 29-28 scores in a razor-close bout with “Bam Bam” Steven Gardener in which both men constantly exchanged dominant positions.

At 205 pounds, Darlington's Thomas Denham overcame a brief rear-naked choke threat from Brett McDermott to lock up one of his own, pounding his way to the submission at 3:58 of round two.