ENOCH, Alberta -- Light heavyweight prospect Ryan Jimmo made it 14 wins in a row Friday night at the River Cree Resort & Casino, forcing the ringside physician to stop his bout with Dwayne Lewis in the third round, as the “Big Deal” took the vacant Maximum Fighting Championships 205-pound title in the headliner of MFC 28 “Supremacy.” 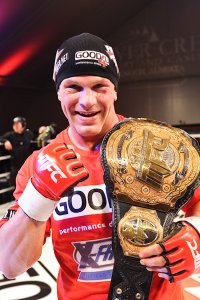 "I had to respect Dwayne's power. He's more technically sound than I thought he was going to be and I knew I couldn't trade with him," Jimmo told Sherdog.com after the win. "Knockout punches can come out of nowhere though so I didn't want to play that game with him."

The 35-year-old Lewis, a full-time mine supervisor for Shell Canada, had more success in round two, but continued to absorb heavy low kicks, until his left thigh was purple and bleeding from the damage. Early in the third frame, Jimmo tripped Lewis to the mat and took full mount, crushing him with heavy rights. Lewis eventually escaped, but referee Brian Beauchamp immediately called for the ringside doctor to examine the grotesque, egg-sized hematoma that swallowed Lewis’ left eye. The end was a no-brainer, and Jimmo took the MFC light heavyweight title at 3:13 of the third fame. 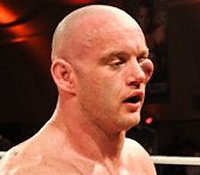 "I believe it was a punch that did the damage. I'll have to watch the tape to be sure, but I thought I got him with my right," added Jimmo. "When they stopped the fight I was elated. The belt feels nice and heavy.”

In the last four years, the 29-year-old Jimmo, who previously beat Lewis on points in April 2007, has only slipped up in a May 2008 exhibition bout against Antwain Britt in the elimination round of “The Ultimate Fighter” Season 8.

Next on tap for the “Big Deal” will be the Canadian wrestling nationals next month in Edmonton.

In his MFC debut, Drew Fickett disposed of UFC veteran Matt Veach in a under a minute.

Veach quickly took Fickett to the floor, but “Night Rider” went to rubber guard, pulling his shin over Veach's throat and transitioning to a fight-ending armbar in just 36 seconds.

"What can I say? I tapped him out in 36 seconds," said Fickett after the win. "I think he was maybe a little nervous. I just kept him close and he let me get my guard a little too high. My specialty isn't really an armbar."

Fickett was originally set to meet MFC lightweight champ Antonio McKee, who pulled out a week ago due to a knee injury. Following a dreadful 2-8 streak, the Tucson, Ariz., native has been reborn as a 155 pounder, winning five in a row, all by submission. 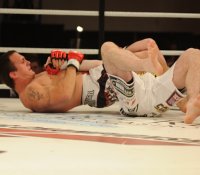 Lightweights Richie Whitson and Curtis DeMarce took “Fight of the Night” honors with an entertaining slugfest that had the River Cree fans on their feet for the majority of the bout.

The first two rounds saw DeMarce landing more clean, hard blows in the first round while Whitson pulled ahead late in the second period, badly rocking the Brandon, Manitoba, native with a head kick. Whitson suffered a cut over his left eye in the first round from a clash of hands that poured blood over his face and chest throughout the fight. However, the third clearly belonged to the bloodied Whitson, as he took the fight to the ground and controlled the bout with his superior grappling, elbowing DeMarce liberally throughout.

After three rounds, judge John Braak saw the fight 29-28 for DeMarce. However, Bill Warwick and Beauchamp liked the fight for “Hellboy,” giving Whitson the split-decision win, his fifth straight conquest in eight months. 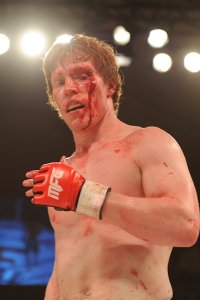 C. Penner
Whitson was bloodied but he
didn't bow.

St. Albert, Alberta, resident Sheldon Westcott sent his local fans into a frenzy in the opening round of his welterweight fight with Thomas Denny, dominating the long-time veteran in the opening frame with heavy punches and guillotine attempts. However, Westcott slowed as the fight progressed, and the pink-haired, well-traveled “Wildman” was able to take his back late in the second, and then stayed on it for the entire final stanza.

The highly contentious fight went to the cards, where judge Vern Gorman scored the bout 28-27 Denny. Beauchamp had it 29-28 Westcott and Judge Bill Warwick saw the bout 28-28 for a split draw. Warwick had the opening frame 10-8 for Westcott, while Gorman saw it likewise in addition to a 10-8 Denny third round. Sherdog.com saw the fight 28-28.

Newton, who replaced Razak Al-Hassan on two weeks’ notice, defended all of Wallace’s submission attempts from guard, diving in and out with crushing right hands. In round two, Wallace attempted to scramble to his feet, and “The Hardcore Kid” jumped on him, cinching up a no-hooks rear-naked choke for the tap out at 4:34 of the period. Wallace has lost four of his last five after starting his career 9-0.

In his second fight back after a five-year hiatus, corporate lawyer and unbeaten lightweight Tyrone Glover moved to 6-0, taking a split decision (29-28, 29-28, 28-29) over H.I.T. Squad’s Robert Washington. Glover nearly tapped Washington with a kneebar and a triangle choke in what was otherwise an uneventful fight with much circling on the feet.

In lightweight action, Dynamic MMA's Dan Ring used superior grappling skills to take Garret Nybakken's back and sink in the rear-naked choke, as the Vancouverite earned the tap at 2:21 of the second frame.