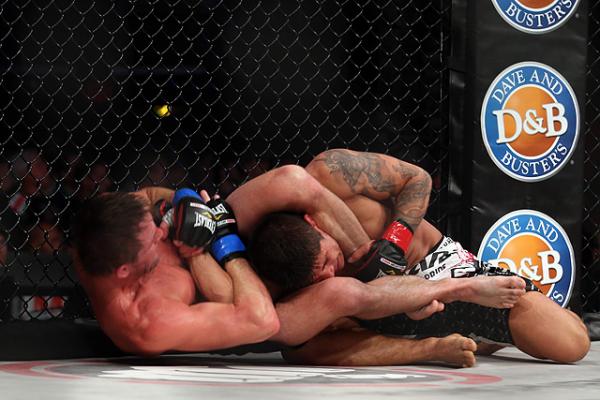 
The human arm was not designed to bend in certain directions.

Joe Warren submitted Nick Kirk with a reverse triangle armbar in the second round of their Bellator MMA bantamweight tournament semifinal at Bellator 101 on Friday at the Moda Center in Portland, Ore. Kirk (10-3, 0-3 Bellator), who had never before been finished, asked out of the cage 3:03 into round two.

A world champion in Greco-Roman wrestling in 2006, Warren kept the heat on the Minnesotan. He struck for a pair of takedowns in the first round and unleashed a wide variety of strikes on the feet. In round two, he delivered another takedown, scrambled into an awkward reverse triangle position and zeroed in on the arm. Kirk appeared to be safe initially, but Warren readjusted his grip, bent the arm backwards and forced the submission.

“I felt I was moving better,” Warren said. “I was a little more under control. I wasn’t rushing things.”

The win puts Warren in the 135-pound final, where he will confront Travis Marx with a shot at Bellator gold on the line. Afterward, the self-professed “Baddest Man on the Planet” took aim at his next opponent.

“I would get hurt or move out of the country,” Warren said, pointing his bluster at Marx, “because when I get my hands on you, I’m going to crush you worse than I crushed him.” Photo: D. Mandel/Sherdog.com
Sarnavskiy's right hand was righteous.
Once-beaten Russian prospect Alexander Sarnavskiy submitted Marcus Davis with a first-round rear-naked choke in the Season 9 lightweight tournament quarterfinals. Davis (22-10, 0-1 Bellator) conceded defeat 1:40 into round one, perhaps an instant before he would have blacked out.

Sarnavskiy (24-1, 3-1 Bellator) stuck his 40-year-old counterpart with a stiff right hand, sending him to his backside inside the first 20 seconds. “Tiger” pounced, blasted Davis with punches and ultimately moved to his back. Not long after, the rear-naked choke had taken hold, leaving “The Irish Hand Grenade” no choice but to
surrender. Photo: D. Mandel/Sherdog.com
Tirloni potshotted Clementi to advance in
Bellator's Season 9 lightweight tourney.
Ricardo Tirloni threw the brakes on a two-fight losing streak, as he captured a unanimous verdict from UFC veteran Rich Clementi in the Season 9 lightweight tournament quarterfinals. All three judges sided with Tirloni (16-4, 3-3 Bellator), awarding him 30-26, 30-27 and 30-27 marks on the scorecards.

Clementi (45-23-1, 2-2 Bellator) pecked away with leg kicks throughout the 15-minute encounter but failed to give the Brazilian pause. Tirloni routinely found a home for his left hook, one of which opened a cut on his opponent’s forehead in the first round. Clementi landed a beautiful spinning back fist in round three, but he failed to keep pace with Tirloni’s multi-punch bursts. Photo: D. Mandel/Sherdog.com
Brooks opened up a third eye on Alessio.
Quick hands, quick feet and a steady diet of takedowns, clinches and ground-and-pound carried American Top Team’s Will Brooks to a lopsided unanimous decision over John Alessio in the Season 9 lightweight tournament quarterfinals. All three cageside judges scored it for Brooks (11-1, 3-1 Bellator): 30-26, 30-27 and 30-25.

Not much went right for Alessio (34-17, 0-1 Bellator). Brooks opened a cut on his right brow with a series of close-quarters uppercuts in the first round, mounted him in the second and carved out a gnarly horizontal gash below his left eye with a knee strike in the third.

By the time it was over, Alessio’s face was spurting blood all over the cage.

“Alessio is a veteran, and it’s a blessing to be able to come here and compete against him,” Brooks said. “I’m just going to enjoy this moment. When I get back to the gym, I’ll start focusing on my next fight.” Photo: D. Mandel/Sherdog.com
Awad won via submission, but it was his
punching power that led the way.
Millennia MMA’s Saad Awad submitted “The Ultimate Fighter” Season 9 alum Martin Stapleton with a first-round rear-naked choke in the Season 9 lightweight tournament quarterfinals. Stapleton (12-2, 0-1 Bellator) conceded defeat 3:46 into round one, his eight-fight winning streak halted in decisive fashion.

Awad (15-5, 3-1 Bellator) set the tone with his hands, as he floored the Brit with a multi-punch combination inside the first 30 seconds. Stapleton later delivered a takedown, only to find himself outgunned on the mat, as well. Awad sprang the reversal, transitioned to mount and settled on his foe’s back. From there, he softened him with punches until Stapleton surrendered his neck.

“He came straight forward. My plan was to pick him apart, but he came right at me, so I had no choice but to throw punches,” Awad said. “I pushed his legs through and kind of bunny-hopped into mount. He was strong. I felt like he was going to roll back into my guard, but I got the rear-naked choke.” Photo: D. Mandel/Sherdog.com
This was Andy Uhrich's view for the
better part of 15 minutes.
In undercard action, Polish prodigy Marcin Held stopped Ryan Healy on punches 72 seconds into the first round of their lightweight encounter; reigning Maximum Fighting Championship welterweight titleholder Nathan Coy posted a unanimous decision over Andy Uhrich, earning 29-28 nods from all three judges; Dave Vitkay coaxed a tapout from Tyson Jeffries with a rear-naked choke 3:07 into round three of their battle at 185 pounds; Brent Primus submitted Scott Thometz with a rear-naked choke 3:48 into the first round of their lightweight scrap; Sports Lab bantamweight Austin Springer took a unanimous decision over Zach Skinner, sweeping the scorecards by 30-26, 29-28 and 29-28 marks; and Peter Aspinwall eked out a split verdict (29-28, 28-29, 29-28)
against “The Ultimate Fighter” Season 7 alum Jeremiah Riggs
at 185 pounds.