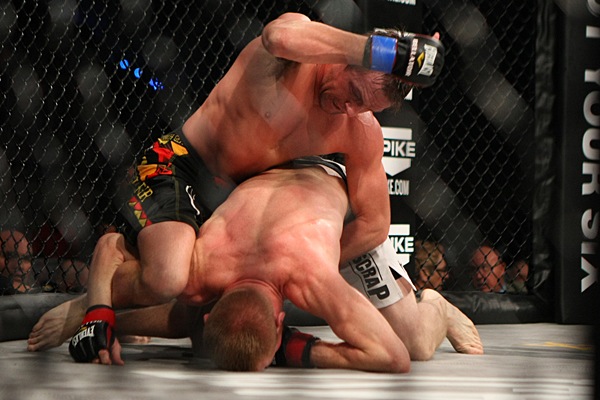 Onetime Bellator Fighting Championships featherweight titleholder Joe Warren returned to form following consecutive knockout losses, as he grinded out a unanimous decision against the overmatched Owen Evinger in the Bellator 80 headliner on Friday at the Seminole Hard Rock Hotel and Casino in Hollywood, Fla.

All three judges scored it the same: 30-27 for Warren (8-3, 6-2 Bellator), who rebounded from horrific defeats to Alexis Vila in September 2011 and Pat Curran in March.

“Crazy excited to win again under the Bellator banners,” said Warren, who now competes at 135 pounds. “I’m real focused on getting another belt. My waist is bare.”

Warren, a former Greco-Roman wrestling world champion, struck for takedowns in all three rounds, mounted Evinger twice, threatened with various submissions and deployed some mild ground-and-pound. Outside of a brief exchange in the opening frame in which he scrambled into full mount, Evinger was never a factor in the fight.

Martinez was the aggressor for much of the match. The 25-year-old West Jordan, Utah, native bottled up Fabiano with straight left hands to the head and body, occasionally mixing in leg kicks. Martinez twice staggered the Nova Uniao standout with punches, first in the second round and again late in the third. Fabiano (15-4, 1-1 Bellator) had his moments, including a first-round takedown and some sporadic right hands, but they were not nearly enough to deter Martinez or sway the judges. 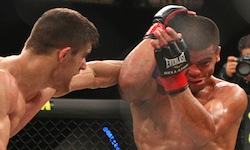 Keith Mills
Martinez's boxing bested Fabiano and
got him to the tourney finals.
“I feel a little tired, beat up,” said Martinez, who will carry a five-fight winning streak into his next appearance. “That’s a tough opponent. They’re just not going to get any easier, are they?”

Martinez will face the once-beaten Shahbulat Shamhalaev in the 145-pound final. The 29-year-old Shamhalaev advanced in the tournament with first-round finishes against Cody Bollinger and Mike Richman.

“I haven’t watched tape [on him],” Martinez said. “I see he got two quick stoppages, but I’m a tough kid. It’s going to be a good one.”

Left jabs and right crosses carried Volkov (18-3, 2-0 Bellator), and 24-year-old Russian wore down his foe with volume and precision. Referee James Warring, a former boxing champion, did not do Quieroz any favors, as he awarded Volkov a pair of bizarre standups. The second restart led to the stoppage, with Volkov swarming the Brazilian against the cage and finishing him with a series of unanswered blows.

Volkov, who has won nine straight fights, will meet Richard Hale in the final. Hale advanced in the tournament with a pair of first-round finishes against Mike Wessel and Thiago Santos.

Takedowns, a stifling top game and heavy ground-and-pound carried Brett Cooper to a unanimous decision over Strikeforce veteran Darryl Cobb in a middleweight showcase. All three cageside judges scored it 30-27 for Cooper (17-7, 4-2 Bellator), who has won his last four fights. 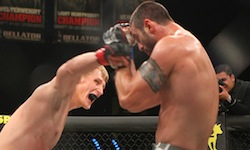 K. Mills
Volkov's striking overcame Querioz's wrestling.
Cooper struck for seven takedowns in the 15-minute bout, four of them inside the first round. The 25-year-old Kings MMA representative kept Cobb (5-6, 0-2 Bellator) hopelessly pinned on his back, as he unleashed punches to the head and body with varying degrees of intensity. Though visibly fatigued, Cooper never relented, throwing in his final takedown in the last 10 seconds of the bout.

In preliminary action, UFC veteran Joe Vedepo submitted Mike Bernhard with an unorthodox shin choke 3:26 into the first round of their middleweight tilt; Cosmo Alexandre avenged his lone career defeat and took a unanimous verdict from Josh Quayhagen in a welterweight duel, securing three 30-27 scores from the judges; undefeated American Top Team export Cristiano Souza stopped former USC linebacker Robert Otani 2:46 into round one of their battle at 170 pounds.

Elsewhere, wrestling standout Shanon Slack of Reign MMA cruised to a one-sided unanimous decision over Sky Moiseichik in a catchweight encounter, earning 30-27 nods from all three judges; Ryan DeRocher evened his record at 4-4, as he put away Taylor Krahl with punches 20 seconds into round one of their match at 170 pounds; and lightweight Brandon Girtz captured a unanimous decision from the previously unbeaten Michel Quinones, sweeping the scorecards by identical 29-28 counts.