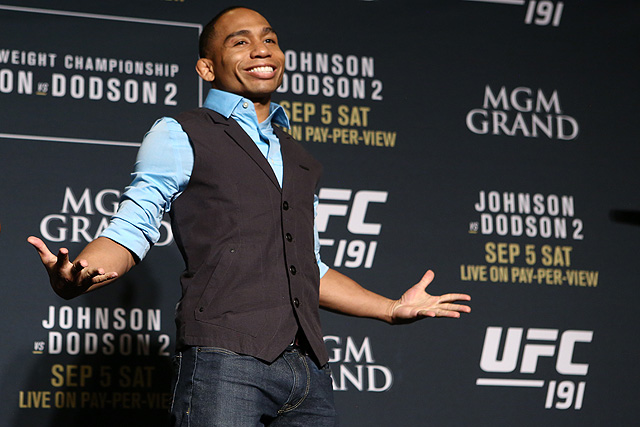 John Dodson wants to make a splash in his return to bantamweight. | Dave Mandel/Sherdog.com


Thomas Almeida has made quite the impression in his first four UFC appearances, and now it seems he is attracting attention from some of the promotion’s bigger names.

After the offensive-minded Brazilian scored a devastating first-round knockout victory over Anthony Birchak this past Saturday, John Dodson apparently took notice. According to a report from UFC Tonight, Dodson texted UFC matchmaker Sean Shelby asking for a fight with Almeida shortly after the prospect dispatched Birchak.

Dodson recently announced plans to move up to bantamweight after two failed title bids against flyweight champion Demetrious Johnson, who is the only man to defeat “The Magician” during his promotional tenure. Dodson competed at 135 pounds on Season 14 of “The Ultimate Fighter” and defeated current titlist T.J. Dillashaw via first round technical knockout at the “TUF 14” finale before moving down to flyweight.

In addition to his finish of Birchak, Almedia owns stoppage victories over Brad Pickett and Yves Jabouin within the Las Vegas-based promotion. The 24-year-old Chute Boxe representative is 20-0 as a professional overall and has finished all but one of his wins inside the distance.