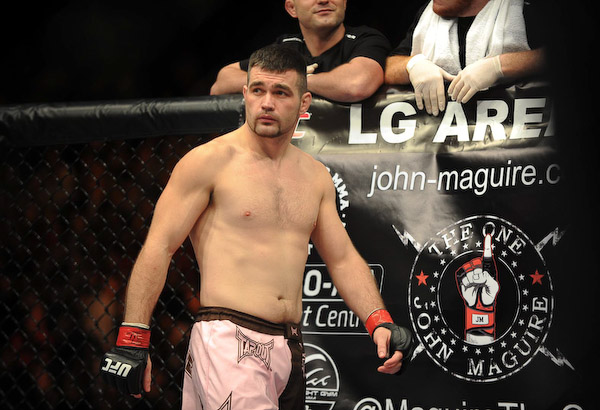 British talent John Maguire will drop to 155 pounds for his next outing when he meets Canadian Mitch Clarke at UFC 161.

UFC 161 airs live on pay-per-view and is headlined by an interim bantamweight clash between reigning champion Renan Barao and onetime WEC titlist Eddie Wineland. Winnipeg’s MTS Centre will host the event, which marks the organization’s first trip to the Canadian province of Manitoba.

Maguire, 29, saw a seven-fight winning streak snapped last September when he was outpointed by countryman John Hathaway at UFC on Fuel TV 5. Most recently, “The One” was handed a second straight loss for the first time in his career, when Matt Riddle snatched a unanimous decision from the Englishman at UFC 154 on Nov. 17.

Like Maguire, Clarke also rides back-to-back losses into the contest, as “Danger Zone” was finished by John Cholish in 2011 before dropping a split verdict to Anton Kuivanen last July at UFC 149. Prior to joining the UFC, the Canadian posted nine straight wins to start his career, including six submission victories.

Jimmo, 31, fell victim to a James Te Huna comeback last month at UFC on Fuel TV 7, resulting in the Canadian’s first loss since his pro debut back in 2007. “Big Deal” impressed in his first Octagon foray last July, when he knocked out Australian grappler Anthony Perosh in just seven seconds at UFC 149.

Pokrajac joined the UFC in 2009 and has posted a 4-4 promotional record with one no-contest thus far, earning three straight victories from March 2011 to May 2012. That winning streak was halted by consecutive defeats to Vinny Magalhaes and Joey Beltran last year, though the latter defeat was changed to a no-contest after Beltran tested positive for the banned substance nandrolone at UFC on FX 6.