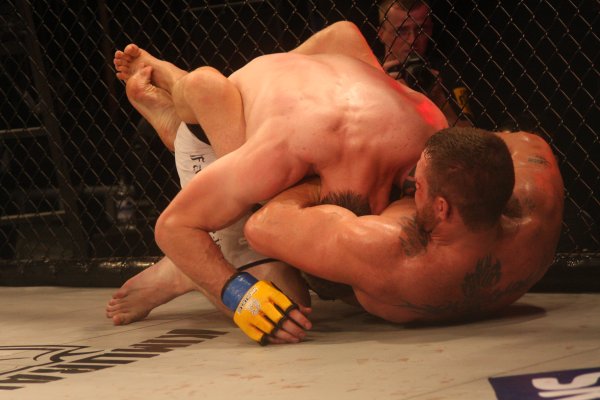 John Phillips recorded the second submission victory of his career after surviving some huge pressure from rangy Irishman Chris Fields in the Cage Warriors 48 main event at the HMV Forum in Kentish Town, England, on Saturday night.

The Welshman Phillips opened up with a plethora of punches that clearly shook the slow-starting Fields. Taking the fight at a catch-weight on late notice, Fields took the action straight to the floor and seemed to have a distinct advantage in the grappling department, mounting and pummeling Phillips.

Later in the round, Phillips would call on his opponent only to be hit with an immediate push kick to the throat. Fields’ grappling dominance looked set to continue in the second frame, with the SBG Ireland product securing a nice trip takedown. Phillips, a revered striker, went for what seemed to be an unlikely arm-in guillotine attempt, but to the huge surprise of many in attendance he forced Fields to submit 2:04 into the second round.

The man dubbed “The White Mike Tyson” adds the submission scalp to his triangle choke victory against Tomas Penz in his last outing. Cage Warriors announced post-fight that Phillips will get a chance to avenge his 25-second submission loss to Pavel Kusch in a middleweight title fight.

“I was talking to Chris during the first asking him if he was getting tired. There was no bad blood though -- he’s a good guy,” Phillips explained to Sherdog.com. “I can’t wait to get revenge against Kusch. I just got caught cold last time.”

In the evening’s co-main event, former “Ultimate Fighter” contestant Aaron Wilkinson made short work of Leigh Cohoon in a much-needed return to form on a big stage. Wilkinson, a product of the Wolfslair Academy, has enjoyed mixed success since his stint on the reality show but looked a class above his opponent in winning via rear-naked choke 2:07 into round one of the welterweight scrap. 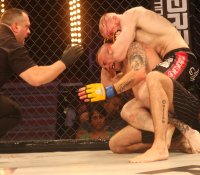 David Lethaby
TUF alum Wilkinson choked Cohoon.
Welterweight prospect Danny Roberts overcame veteran opponent Jack Mason in a tense affair that played out mostly on the floor. Mason’s intentions were laid out clearly in the first with the Tsunami Gym fighter catching a leg kick early and taking the action to the deck. Mason worked top position for most of the round but looked visibly shaken by a hard Roberts upkick.

In the second period, Roberts was able to land some strikes and later took a turtle-up Mason’s back after some good work in the clinch. Mason did well to shake his opponent off his back but left his arm in danger as a consequence. The Liverpool resident took full advantage of a firm grip on Mason’s arm, eventually forcing the tap 2:46 into the second period.

An elated Roberts described the win to Sherdog.com as the “best moment in his career.”

Veteran middleweight Denniston Sutherland proved too much for Brett Sizeland, with “Mad Max” putting on an impressive ground-and-pound clinic. Sizeland took Sutherland to the ground early on, but the wily campaigner was able to avoid taking any damage of note. However, when Sutherland later secured his own takedown, his top game would prove much more devastating. A long series of hammer fists forced referee Neil Hall to step in and save the hapless Sizeland 4:12 into the first. 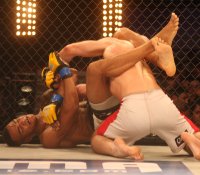 D. Lethaby
Roberts rolled on the floor.
Stepping in on late notice to fight Israeli Ido Pariente, lightweight Dale Hardiman lost 25 percent of his fight purse after missing weight. Pariente looked to use his grappling prowess to good effect, taking down his opponent and landing some decent ground-and-pound from top position, clearly taking the first round.

It was Hardiman’s heavy artillery that would have the last say in the bout, however, as he dropped his man with a massive right hand. With the Israeli still trying to regain his senses, Hardiman landed a series of brutal hammerfists to stop the action and put Pariente out cold 43 seconds into round two.

Elsewhere, tricky grappler Kris Edwards showed a very dangerous guard game in an entertaining 125-pound contest. After possibly dropping the first round to Brian Hyslop, the Welshman Edwards came back strong in the second to secure a tight arm bar finish 1:44 into round two.

Heavyweight Dayman Lake showed huge power to pick up and slam fellow big man Jay Mortimore. Once on the deck Lake hit Mortimore with a variety of strikes, forcing the stoppage and bouncing back after consecutive losses.

Piotr Ptasinski dominated fellow Polish welterweight Jacek Toczydlowski in a bizarre showing from the latter. Despite being constantly hit with leg kicks and peppered with two-punch combinations, Toczydlowski was content to stand up with Ptasinski for the full three rounds --much to the annoyance of his corner team. Ptasinski eventually gained the decision victory, with all three judges seeing it 30-27 in his favor.

Earlier, Leon Del Gaudio shook off an early Mehmet Faulds onslaught to secure a rear-naked choke victory 3:03 into the first round of their 164-pound catch-weight contest, while Charlie Watts overwhelmed Victor Peixoto with a guillotine choke in 53 seconds.