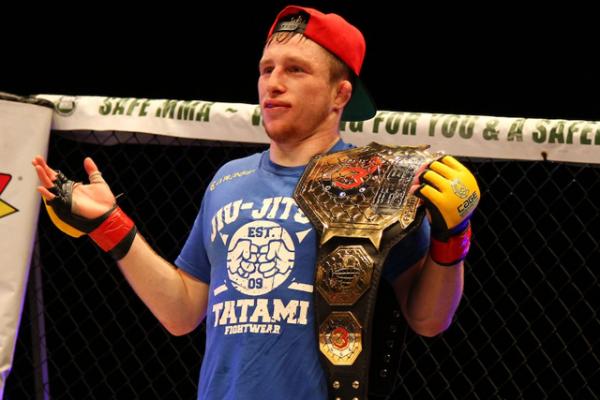 
Nobody can say Brett Johns didn’t earn it.

Battling his way through a grand total of 40 minutes of cage time as well as two gritty opponents, Johns emerged from the Motorpoint Arena in Cardiff, Wales, as the Cage Warriors Fighting Championship bantamweight titlist on Saturday. The outcome was in doubt right up until the end, as “The Pikey” concluded his run through the promotion’s four-man 135-pound bracket with a hard-fought split decision triumph over a game Jordan Desborough in the CWFC 59 headliner.

Judges Andy Sledge and David Lethaby saw it 48-47 in favor of Johns, while Ben Cartlidge submitted a 48-47 scorecard for Desborough.

“Wow. Just wow,” Johns said. “Jordan Desborough wasn’t even meant to be in this tournament. The boy came out with guns blazing and caught me with some lovely shots. It was a close fight.”

As Johns mentioned, Desborough wasn’t even supposed to be in this position after dispatching Timur Mercanoglu in an alternate tournament bout earlier on the card. However, an injury to James Pennington, who had punched his ticket to the final with a decision (20-18, 20-18, 20-18) over Kris Edwards, gave the Englishman his opportunity.

While Desborough certainly had his moments, including getting the best of several exchanges, it was the unrelenting pressure of Johns that ultimately won the day. The Chris Rees Academy representative struck for multiple takedowns and was sticky throughout the five-round encounter. Desborough was generally more aggressive with his attacks from top position, but it was the more consistent control of Johns that captured two of the three cageside judges’ scorecards.

Johns effort was all the more impressive considering that he and David Haggstrom required a third frame -- first-round tournament bouts were initially scheduled for two rounds -- to settle their semifinal conflict. In the end, it was Johns who imposed his will over the decisive third round to earn a unanimous decision and advance to the 135-pound title tilt.

"I lost count of how many elbows and punches I’ve taken tonight,” Johns said. “Or how many takedowns I landed.”

Jim Alers was successful in his first defense of the CWFC featherweight strap, taking a grueling unanimous decision against Martin Svensson in the evening’s co-main event. Sledge and Lethaby scored the contest 49-46, while Cartlidge had it 48-47, all in favor of Alers.

While Alers never allowed the reach advantage of the 6-foot-1 inch Swede to come into play, victory didn’t come easily for the man known as “The Beast.” Things appeared dire for Svensson in round one, as Alers cleverly worked to his opponent’s back and jumped for a rear-naked choke. Svensson would survive the predicament and even finished the frame in a dominant position, teeing off on the American with kicks to the body and knees before the round expired.

Unfortunately for Svensson, moments such as those were few and far between. Alers was the aggressor in each round, putting the Swede on the defensive with flying knees and punching flurries. While Svensson was able to take Alers’ back again in round four, it was the Alliance Jiu-Jitsu Orlando product who authored the dominant moment of the frame, hurting his foe with a side kick to the body near the end of the period. Svensson was a clearly a spent force in the fifth round, as Alers landed a takedown and controlled much of the final five minutes. 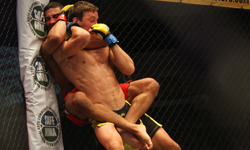 H. Fairclough
Svensson survived Alers' early choke attempt
but the American kept the pressure on.
Earlier, Tommy Maguire was victorious in his Cage Warriors debut, submitting Lewis Long with an arm-in guillotine choke in the third round of their lightweight tussle. Moments after Long lost a triangle attempt, Maguire secured the decisive maneuver, bringing an end to the bout 2:56 into the stanza.

The bout was tooth-and-nail before Maguire put his special brand of “Gypsy Jiu-Jitsu” to work, with both fighters having periodic success on the feet. Maguire controlled the tempo of the second round, landing hard right hooks to the body on several occasions.

Long upped his aggression in round three and appeared to be getting the better of the standup before Maguire finished the fight.

Mats Nilsson dominated Denniston Sutherland in a middleweight showdown, finishing “Mad Max” with a flurry of punches from back mount 2:40 into the second round. The 29-year-old Swede has now won seven of his last eight outings.

Nilsson took control from the outset, taking advantage of Sutherland’s wild punches to change levels for a takedown less than 20 seconds after the opening bell. He gave his English opponent little opportunity to breathe from there, moving into mount three times and punishing Sutherland’s body with well-placed punches and knees. Round two saw Nilsson wobble Sutherland with a series of power punches before landing another takedown. A furious barrage of ground-and-pound forced referee Marc Goddard to call a halt to the contest.

A heavy top game and a steady stream of ground-and-pound carried Dave Hill to a unanimous decision triumph over Brian Moore in a featured featherweight clash. Judges scored the bout 30-28, 30-27 and 29-28 in favor of the Englishman.

After a competitive first round that saw both men work against the fence and trade takedowns, Hill turned up the aggression, landing heavy punches and elbows to wear his opponent down over the course of the fight’s final 10 minutes. Moore had one last opportunity in round three when he took his adversary’s back with a little more than a minute remaining, but Hill was able to control the Irishman’s wrists and survive until the horn.

Lee Caers turned the tables on Aaron Thomas to earn a opening-round submission victory in the first main card bout. Thomas controlled much of the period through clinch work, takedowns and ground-and-pound and appeared to be on the verge of a finish after taking his opponent’s back late in the frame.

However, after a failed armbar attempt by Thomas, Caers moved into full mount in a scramble. From there, the Combat Athletics Academy representative forced Thomas to give up his back and quickly cinched a rear-naked choke, bringing an end to the welterweight scrap 4:31 into the opening stanza.

In preliminary action, Sam Gilbert submitted Jamie Rogers with a triangle choke at the 1:52 mark of round two at 155 pounds, while Gym01 representative Brett Caswell captured a unanimous verdict over Paul Rogers at flyweight.