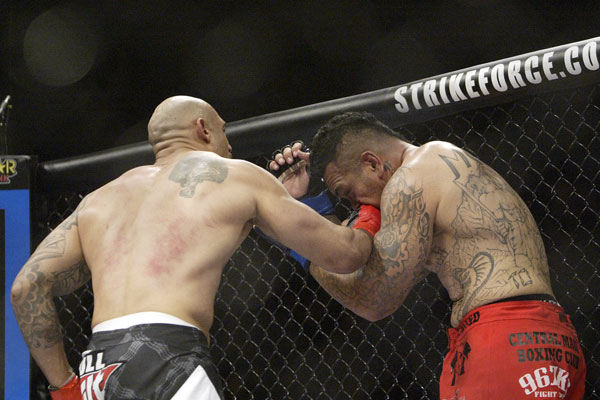 
FRESNO, Calif. -- Lavar Johnson bounced back from a near-death experience eight months ago and earned a second-round technical knockout stoppage on strikes at 3:29 against Lolohea Mahe at Strikeforce Challengers 7 at the Savemart Center.

Johnson, who miraculously survived multiple gunshot wounds in a random walk-by shooting at a family reunion last Fourth of July, bore the trauma of his ordeal by a thick surgical scar from his sternum down to his navel. He had the Fresno crowd securely behind him in his return from a taxing ten-month layoff.

The 32-year-old fighter pumped his left jab, though the previously undefeated Mahe was game to counter with his own fists. Johnson missed with a big overhand right, and Mahe pushed him to the fence. Johnson hunted for a standing guillotine, but Mahe landed two takedowns and expended considerable energy to finish the round strong.

Mahe came out swinging in the second round, but when the pair finally separated from another fence clinch, Mahe was wobbling from exhaustion. Johnson attacked with jabs and an arched elbow, digging deep for a finish on the fence.

Ron Humphrey earned the first submission victory of his career against George Bush, catching him in a quick guillotine choke from his back at 1:44 into the first round.

The dreadlocked Humphrey was grounded by Bush off a kick, but pushed Bush off to regain his footing in Humphrey’s light heavyweight debut. When Bush shot again, Humphrey was waiting with the choke and tightened it as they hit the canvas. Referee “Big” John McCarthy stepped in as Bush tapped out. 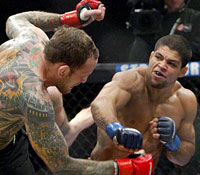 Jeff Sherwood/Sherdog.com
Andre Galvao vs. Luke Stewart.
Andre Galvao earned a split decision (30-27, 27-30, 29-28) over Luke Stewart in their welterweight contest. Galvao, a Dream veteran and decorated Brazilian jiu-jitsu black belt, scored an immediate takedown, though Stewart scrambled away from an early armbar attempt, and managed to his feet. From there, the fighters stalled on the cage, and revisited this position in all three rounds.

In the second frame, Stewart waged a convincing kickboxing campaign, while both initiated takedowns. Stewart reversed Galvao two times to kill any momentum the grappler could cull together though. In the final stanza, Galvao launched a key takedown, but again Stewart reversed to top position.

Miesha Tate utilized takedowns to stifle muay Thai newcomer Zoila Frausto and locked up an armbar submission at 4:09 in the second round of their 135-pound women’s bout. Tate, who has twice as many bouts as Frausto, crowded the former soccer player on the fence, then finessed her down multiple times to side control during the nine-minute affair.

With a secure lead, Tate decided to trade in the second round, ate a hard right, then decided it better to resort back to her earlier tactics. With another easy takedown to side control, Tate had the hometown girl stalled. The crowd begged for the standup, though Tate was maneuvering to mount again, then posted and began to rain punches before pitching off the side for the fight-ending armbar.

Justin Wilcox confidently wielded his newfound striking for a sound unanimous decision over fellow wrestler Shamar Bailey in a 160-pound catch-weight bout to kick off the Showtime-televised portion of the card.

Wilcox cut Bailey over his right eye out of gate, and Bailey never regained his confidence, retreating at key moments throughout the fifteen minutes. Wilcox landed combinations and leaned on a right high kick; Bailey’s apprehension kept him from mounting not much more than the occasional jab.

The former Edinboro University wrestler and one-time bodybuilder nailed takedowns in the second and third rounds, and mounted Bailey in the final two minutes before launching into a failed armbar attempt in the final seconds. Wilcox improved to 9-3.

Daniel Cormier knocked out John Devine with a short right hook 69 seconds into their heavyweight preliminary bout. The 30-year-old Cormier, who placed fourth in the 2004 Olympics in freestyle wrestling and captained the U.S. squad en route to the 2008 Beijing Olympics, shrugged off Devine’s attempts to ground him, then sealed it with the punch.