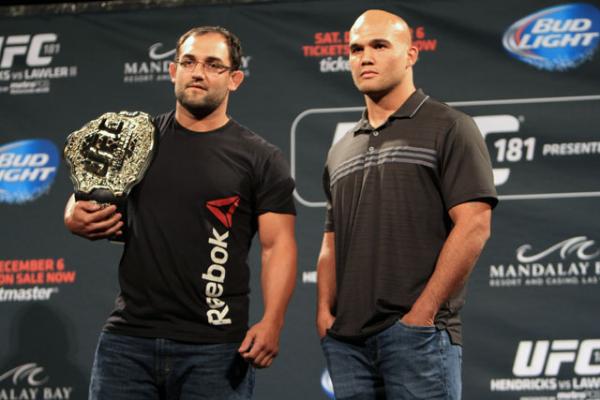 
Johny Hendricks may be the UFC welterweight champion, but he doesn’t necessarily think like it.

While some champions treat the title as a prized possession that they have to protect at all costs, Hendricks sees it from a different perspective -- and it’s one that keeps him grounded.

“This whole process I haven’t looked at myself as the champion,” Hendricks said. “This is a fight and as soon as you sign that bout agreement, you are fighting for a belt that’s in the middle and belongs to nobody. I don’t get to take my past fights into this one. As soon as you start believing your own hype, it’s time to retire.”

To be clear, Hendricks enjoys being the champion, but he doesn’t get wrapped up in the concept of being unbeatable. Instead, it’s the element of danger that keeps the Team Takedown fighter levelheaded in every fight. The concept of losing is a reality for him on any given night. And against Robbie Lawler, despite being fully healed from the bicep injury that made him a one-armed mixed martial artist at UFC 171, Hendricks believes that the rematch at UFC 181 will be just as dangerous, if not more.

“Even if I hit him with everything I have to know that he’s always dangerous,” the welterweight champion explained. “That’s how I’m going into the rematch. He could knock me out. He’s not the strongest person I’ve ever fought, but he has the ability to always keep you wary.”

What’s more important to Hendricks than retaining his title? Entertaining the fans. That means that he’ll always take calculated risks to score a knockout. Hendricks is not out to do just enough not to lose his world title; he wants to win and win emphatically.

“I want to be exciting,” the 31-year-old says with a smile on his face. “There’s many ways to make money in the UFC. How many people are around today because they put on great fights? As soon as they step into that Octagon they’re fighting. That’s my reputation and that’s what I want to do: finish fights and keep fans on the edge of their seats.”

At UFC 181, Hendricks believes he has the perfect dance partner to win yet another “Fight of the Night” award, even though he’d prefer “Knockout of the Night.”