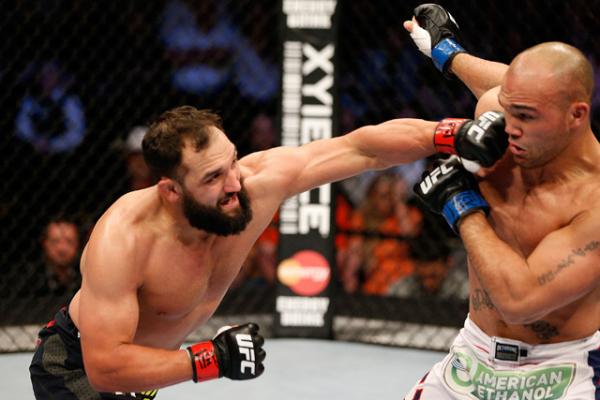 
For the first time in five years, 10 months and 24 days, someone other than Georges St. Pierre occupies the Ultimate Fighting Championship’s 170-pound throne.

Behind a diverse standup attack and an unbreakable resolve, Johny Hendricks captured the vacant welterweight crown with a unanimous decision over Robbie Lawler in the UFC 171 headliner on Saturday at the American Airlines Center. All three cageside judges scored it the same: 48-47 for Hendricks (16-2, 11-2 UFC).


Advertisement
Hendricks complimented accurate punching combinations with stinging leg kicks and occasional knees over the first 10 minutes. Lawler (22-10, 7-4 UFC) turned the corner in the third round, where he had “Bigg Rigg” badly staggered with a crisp left hook to the beard. Hendricks survived, only to endure further punishment -- Lawler carved out a nasty gash near the Oklahoman’s right eye -- from his opponent’s educated hands in round four.

The decision appeared to boil down to the fifth round, where Hendricks found another gear. He wore down a fatiguing Lawler in the clinch and battered the “Ruthless” one with left hands and leg kicks. A late takedown sealed it, as Hendricks kept the Pat Miletich disciple corralled on the canvas in the closing moments.

“He’s one hell of a fighter,” Lawler said. “I was trying to roll with stuff and come back. He was taking it to me and got a couple of takedowns. Hat’s off to him. I just needed to do a little more, and he did enough to win, plain and simple.”

Hendricks has won seven of his last eight fights.

“Robbie is [expletive] tough,” he said. “I feel very blessed. I know the first two were mine. The third and fourth, he kind of caught me. In the fifth, I knew I had to win it. Robbie is tough. He’s a stud. I promise you, I’ll be facing him again, and when I do, hopefully I can put on a better performance.”


American Top Team’s Tyron Woodley took out Carlos Condit with a second-round takedown and follow-up leg kick in the welterweight co-main event. Condit (29-8, 6-4 UFC) crashed to the canvas in visible pain 2:00 into round two, leaving referee Jacob Montalvo no choice but to intervene.

Woodley (13-2, 3-1 UFC) backed up the “Natural Born Killer” with two crackling right hands in the first round before scoring with a pair of takedowns. Another takedown in round two resulted in Condit grimacing in pain and clutching his right knee while trying to retain guard. After a referee restart, Woodley took aim at his compromised counterpart and finished it with a powerful kick to the Jackson’s Mixed Martial Arts representative’s leg.

“He’s a really tough guy,” Woodley said. “I landed some really hard right hands, and I was trying to break his rhythm. I heard him say ‘Ow’ when I took him down. I started chopping left and right, and [I hoped] one of those things would hurt. I knew a lot about this guy. He’s actually my favorite fight to watch. There was a lot of mutual respect. When I hit him with those hard shots and kicked him, I knew he wasn’t going to give up easy, but I knew if I could get through him that I could be a world champion.”

Afterward, Woodley called for a shot at the welterweight crown.

“We know what’s next: a world title,” he said. “I didn’t ask for this fight. This is what it’s about. I stepped up when nobody else would. I fought the toughest guy in the weight class, in my opinion. I went out there and finished him.”

Jury cracked “The Dream” with a sharp right hand inside the first minute and countered effectively throughout the 15-minute clash. He opened a significant gash under Sanchez’s left eye with a clean right hook in the second round and met the Jackson’s Mixed Martial Arts standout’s patented whirlwind flurries with short, surgical punches. Jury also mixed in timely takedowns, showcasing the all-around skills that have made him one of the sport’s more intriguing young lightweights.

“I don’t want to sound cocky, but I just beat him so easily,” Jury said. “He’s a household name and a warrior. I think he’s got the biggest heart in the UFC, and that was the biggest thing I was worried about. He took a pretty good beating, man. If you’ve ever watched his fights, you don’t want to go too crazy on him. I’ve got a good striking game for MMA. I can fight left, right, backwards, and I can mix in my takedowns like a Dominic Cruz.”


Burst of power punches combined with a dizzying array of throws and trips carried American Top Team’s Hector Lombard to a unanimous decision over former Shooto, Strikeforce and EliteXC champion Jake Shields in a featured welterweight scrap. All three judges scored it for Lombard (34-4-1, 3-2 UFC): 30-27, 30-27 and 29-28.

Shields (29-7-1, 4-3 UFC) had no answer for the Cuban judoka’s speed, technique and athleticism. Lombard tore into him with uppercuts and hooks in the first round, opening a cut near his left eye. Shields weathered the onslaught but mounted little in the way of meaningful offense. Lombard scored with trips and throws over the final 10 minutes and withstood a last-second guillotine choke from the Cesar Gracie-trained Brazilian jiu-jitsu black belt in the third round.


Knoxville MMA’s Ovince St. Preux rendered Nikita Krylov unconscious with a first-round shoulder choke in a light heavyweight showcase. Krylov (16-4, 1-2 UFC) -- who stepped in as a replacement for Thiago Silva -- went to sleep 1:29 into round one, his debut at 205 pounds spoiled.

St. Preux (15-5, 3-0 UFC), a former linebacker at the University of Tennessee, swooped in for an early takedown and moved immediately to side mount. Krylov held the guillotine position in ill-advised attempt to defend his counterpart’s advances, leaving himself open to the choke. St. Preux was all to happy to oblige.

“Every time I’m in side mount, and they don’t let go of the guillotine, I’m going for the Von Flue choke,” he said. “All I had to do was get my hands locked. Once I had my hands locked down, I knew I had it.”