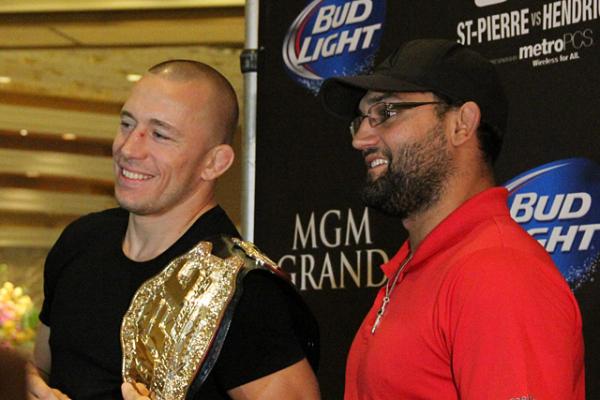 The Nov. 16 UFC welterweight title fight between champion Georges St. Pierre and challenger Johny Hendricks ended with a controversial split decision in St. Pierre’s favor. After a couple of weeks of debate, Hendricks’ striking coach Steven Wright just wants his fighter to get another crack at the title.

“When it went to the cards, we were pretty confident because we thought the rounds we won were pretty clear, but now that it’s removed, as you can imagine, after all the Twitter and all the media news and so on and whatever, I’m just like, hey, just give us another date,” Wright told the Sherdog Radio Network’s “Beatdown” show. “Just get us in there again and we’ll prove it again. … A few days removed from it, there is no decision that’s going to be changed. The title’s not coming our way until we get another shot, so we’re just hoping to get another shot.”

After the bout St. Pierre said he needed to take a break from MMA. It’s not clear how long the champion will be off, but regardless, Wright wants there to be a title on the line the next time Hendricks fights.

“Whether it’s 12 months or whether [St. Pierre] never fights again, as long as our next fight’s for the title, we’re pretty satisfied there,” Wright said. “Because of the situation with Team Takedown and how [Hendricks has] worked things out with … the guys who own Team Takedown, because of the situation that they worked out with the athletes, Johny’s not in a position where he’s looking at checks and he’s worried. … I really think that because of his situation with Team Takedown, if [the UFC] said, ‘Hey, we can’t get this done until September of next year,’ we could wait because we want the title that bad. Anything else is falling short. We do not want an interim title because everybody knows that the interim title just means you’re not the real titleholder.”

Despite St. Pierre’s wish for an extended vacation, UFC President Dana White has said a rematch will happen. Hendricks’ camp is already preparing in case it does.

“We’re already working at it, already looking at things we could have improved on from last fight,” Wright said. “We’ve been film junkies. I’m sending [Hendricks’ grappling coach Marc Laimon] some stuff. Even last night we were texting back and forth and we were looking at stuff and we were like hey, if we get this opportunity again, let’s do this this time, let’s do this. We’re hoping that the Johny he goes against is the Johny that’s got five rounds under his belt now. We’ll be even meaner in the next GSP fight.”

Listen to the full interview (beginning at 44:58).