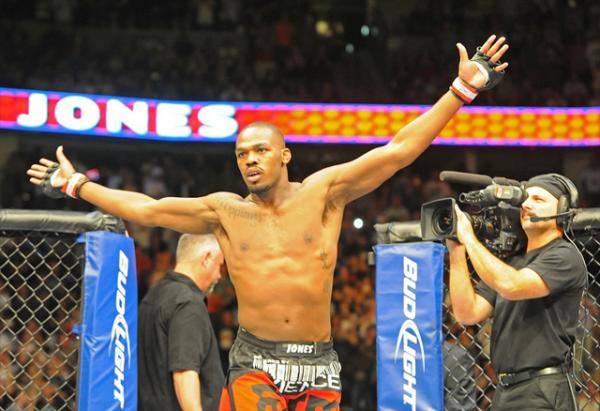 Jon Jones took a top-shelf fighter and made him look utterly ordinary. It has become a common practice for the 24-year-old champion.

Jones controlled the distance, unveiled and endless bag of tricks and kept his stranglehold on the Ultimate Fighting Championship’s 205-pound division, as he defeated former friend and training partner Rashad Evans by unanimous decision to retain his light heavyweight crown in the UFC 145 headliner on Saturday at Philips Arena in Atlanta.

“This is definitely my most satisfying victory,” he said. “I did a lot of things tonight, but I didn’t want to make any mistakes. I didn’t feel the cleanest on my feet, but who I beat is very important to me.”

Jones’ prodigious offensive skill and creativity was something to behold. The Jackson’s Mixed Martial Arts representative tore into Evans with kicks to the leg, body and head, a stiff left jab, crackling right hands and even violent shoulder strikes from the clinch. However, his most effective weapon was the standing elbow -- a technique for which Evans appeared wholly unprepared. It nearly finished the fight for Jones in the second round, when he staggered the challenger against the cage. A flying knee and a beautiful left hook followed soon after.

“It felt completely different [fighting him than it did training with him],” Jones said. “I threw a lot of elbows tonight. That’s something you would never do to a training partner.”

Evans, like others who have preceded him, struggled to bypass Jones’ enormous reach advantage. The Imperial Athletics export landed a clean head kick in the first round that seemed to rattle Jones and delivered a nice right hand in the third. Beyond that, he fought mostly with his back to the cage, eating punches and kicks from a distance.

Jones punctuated his latest conquest with a strong fifth round, as he backed up a jab with a crisp right hand, uncorked a knee from the clinch and scored with the only takedown of the bout. Evans scrambled free, perhaps wary of the champion’s infamous elbow strikes on the ground, but his fate had long been sealed.

“I was a little surprised [I couldn’t finish him],” Jones said. “I had a goal to finish the fight, and I didn’t. Hats off to Rashad. He has made [progress by] leaps and bounds in his game, as well. That was a great competition.”

“He was pretty crafty and tricky, and I didn’t get my timing,” Evans said. “Give him props. He kept me on my toes, so I have to give it up to him. I just need to get better. I’m only 32 years old, and I have a long career ahead of me. I’ll just get better and work my way back up to the top again.”


Surging welterweight prospect Rory MacDonald throttled Che Mills with vicious ground-and-pound en route to a spectacular second-round technical knockout in the co-main event. MacDonald (13-1, 4-1 UFC) finished it 2:20 into round two, as he roared to a third consecutive victory.

“Che was a great opponent,” MacDonald said. “He didn’t get much respect in the media because of his lack of fights in the UFC, but I took this fight very seriously. I’m very happy the way the fight went.”

Mills (14-5, 1-1 UFC) held his own while upright, but on the ground, MacDonald was on another level entirely. He smashed through the Englishman’s guard with ruthless punches from the top and mounted him in both rounds. Mills had no answer for him. Having battered and bloodied him with blows from the top, MacDonald finally moved to back mount in the second round, flattened out a clearly beaten Mills and brought it to an end with rapid-fire punches.

“I could tell I was landing big shots,” MacDonald said. “When I hit guys on the ground, and [the shots] are clean, I know they are going to be hurt. I just tried to stay clean in all my positions and flatten him out."

The 22-year-old’s stock continues to rise.

“I want to be champion one day, but I’m still very young,” MacDonald said. “One thing I lack is experience, and I’m aware of that. I have to get a lot more regular and compete three times a year. I think the fans will enjoy that, and so will I.” 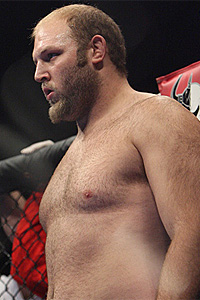 Schaub (8-3, 4-3 UFC) started well enough. He cracked Rothwell with a spinning back elbow that had the monstrous Wisconsin native backpedaling toward the cage. Schaub tracked him there and engaged in a wild, ill-advised exchange with the International Fight League veteran, connecting but leaving himself open for the counter. Rothwell (32-8, 2-2 UFC) answered, delivering a devastating left hook that sent a semi-conscious Schaub to the floor. A few follow-up ground strikes finished it.

“I feel great. You can take a look at me, and [my shape] speaks for itself,” Rothwell said. “I worked very hard. I changed my training camp. I’m not backing down. I know my chin can take some shots. I’m going to throw back, and if you stand in front of me, you’re probably going to go down.”


Fast-rising bantamweight prospect Michael McDonald knocked out former WEC champion Miguel Torres with a ringing right uppercut in the first round of their featured matchup at 135 pounds. An unconscious Torres (40-5, 2-2 UFC) collapsed to the canvas 3:18 into round one.

McDonald (15-1, 4-0 UFC), who turned 21 in January, established himself on the feet from the start, unleashing with combinations. He beat Torres to the punch in close and cracked him with a pair of right uppercuts, the second of which ended the contest. McDonald trailed him to the ground and landed a few more punches for good measure, but the deal was already sealed.


Eddie Yagin notched the first UFC win of his career, as he brawled his way to a split decision victory over former featherweight title contender Mark Hominick. All three judges scored it 29-28, two of them for Yagin (16-5, 1-1 UFC).

Yagin nearly finished it in the first and second rounds. In the first, he floored Hominick with a beautiful right uppercut-left hook combination and followed him to the ground, swarming with punches. Somehow, the Canadian weathered the onslaught. The scene repeated itself in the second round, with Yagin flooring and swarming Hominick. Again, the veteran survived, but he entered round three down on two of the scorecards.

Hominick (20-11, 3-3 UFC) was in prime form in the third round. There, he busted up Yagin with stiff left jabs, right crosses and wicked left hooks to the body. However, he could not put away the Alliance MMA representative and fell short on the scorecards.


A terrific ground game rich in technique and determination carried Brazilian jiu-jitsu black belt Mark Bocek to a unanimous decision over John Alessio in a lightweight showcase. All three cageside judges scored it for Bocek (11-4, 7-4 UFC): 30-27, 29-28 and 30-27.

Bocek took down the Xtreme Couture Mixed Martial Arts representative in all three rounds, grinded on him with punches and elbows and operated freely inside the Alessio guard. He moved to Alessio’s back in the first and third rounds, fished for rear-naked chokes and ultimately chose to go the striking route. Alessio (34-15, 0-4 UFC), a late replacement for the injured Matt Wiman, did some nice work with his hands but did not remain on his feet long enough for it to make a difference.