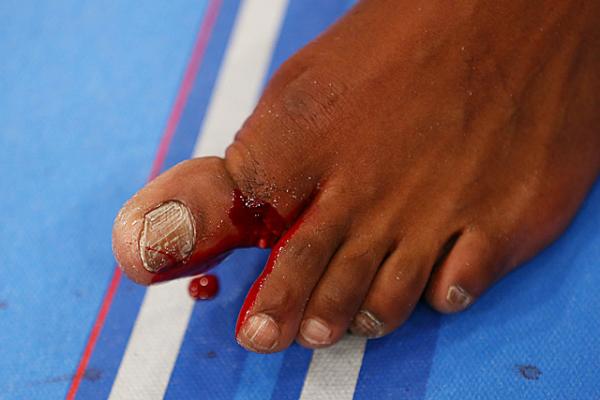 
Despite already owning a resume that includes victories over some of the most accomplished fighters in the world at 205 pounds, Jon Jones had a point to prove on Saturday night.

Heading into his UFC 159 title defense against Chael Sonnen, there was some question as to how Jones would match up with the wrestling of the former NCAA All-American. In less than five minutes, the man known as “Bones” answered that question emphatically, stopping Sonnen with elbows and punches on the ground at the Prudential Center in Newark, N.J. Referee Keith Peterson halted the contest at the 4:33 mark of the opening frame.

“I really wanted to try to ‘Chael Sonnen’ Chael Sonnen,” said Jones, a national champion wrestler at Iowa Central Community College. “I think I did a good job at that. My coach teaches me to have a ‘screw that’ attitude, so if people are saying you’re gonna get outwrestled, you gotta say ‘screw that’. Don’t accept being lesser than other people.”

The Jackson’s MMA representative dominated the contest from the opening bell, taking his opponent down repeatedly and punishing Sonnen with his trademark elbows. When the challenger returned to his feet, Jones controlled most of the action against the fence, landing uppercuts, hooks to the body and a spinning elbow in close quarters.

After landing his third and final takedown of the stanza, Jones was able to trap Sonnen’s left arm and increase the intensity of his assault. Sonnen’s efforts to escape were to no avail, as a vicious knee to the body was followed by a final barrage of elbows and punches on the ground before Peterson intervened. Sonnen briefly protested the stoppage, but at that point the outcome was inevitable.

“He’s an excellent fighter. I have no problem with the decision or the stoppage. He’s very powerful. When he went for the kill he never stopped. I thought I was all right, but I think he’s the better fighter,” Sonnen said. “I thought I could keep up with him. I was very surprised at his power and his size. I’m disappointed; I thought I had more in me tonight. Jon’s the man.”

Jones, did not emerge unscathed, however, as he appeared to have gruesomely broken his toe at some point during the bout, although he did not realize it until his post-fight interview. The injury apparently did little to affect the champion’s performance. With the win, Jones tied Tito Ortiz’s promotional record with five title defenses at light heavyweight.

“Chael Sonnen’s just an awesome opponent. We went through a lot of drama, and it motivated me a lot,” Jones said. 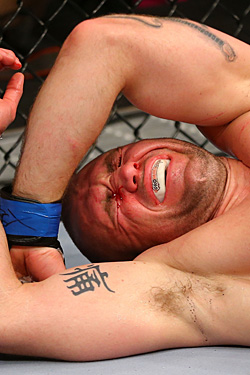 The 185-pound conflict ended prematurely when Belcher received a finger to the eye with 29 seconds remaining in the third period and could not continue. The bout was scored where it ended, with Bisping winning a technical decision on all three scorecards (30-27, 30-27, 29-28). Belcher had previously spent a year away from competition after suffering a detached retina in 2010.

“My apologies to Alan; it was a complete accident. Leading up to this fight, we talked a lot, we promoted the fight. I’ve got nothing against Alan, I think he’s a hell of a competitor,” Bisping said.

Bisping (24-5, 14-5 UFC) stayed busy throughout the bout, consistently finding a home for his right hand against the American. Belcher (18-8, 9-6 UFC), with his hands held low, did not appear to respect Bisping’s power, and he ate a high volume of punches as a result.

“The Talent” threw a variety of kicks early, but struggled to find rhythm and distance against the tactical Brit. As the bout progressed, Bisping’s output remained consistent, while Belcher appeared to fade.

“I was looking for a finish, but Alan is tough as hell. I hit him with some big power shots -- I’ve been working on that,” Bisping said. “He took them well.” 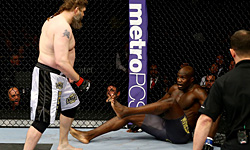 “The Ultimate Fighter” Season 10 winner earned his third consecutive win inside the Octagon, knocking out Cheick Kongo (18-8-2, 11-6-1) with a big overhand right 2:03 into the opening round of their heavyweight contest.

“I get it all from the fans. The fans energize me. It’s all for them; they’re the reason why I knock people out,” said Nelson (19-7, 6-3 UFC), who captured his sixth victory via knockout or technical knockout within the Las Vegas-based promotion.

“Big Country” wasted little time getting inside Kongo’s nine-inch reach, as the portly heavyweight almost immediately caught a kick from the Frenchman and secured a body lock. After about 90 seconds of inactivity against the fence, referee Kevin Mulhall restarted the fighters in the center of the cage. Moments later, Nelson countered a Kongo leg kick with an overhand right behind the ear, dropping his foe to the canvas. One follow-up punch later and the fight was over. 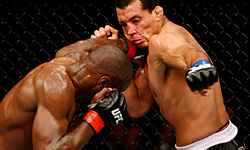 Al Bello/Zuffa LLC/UFC/Getty
Davis outpointed Magalhaes on the feet.
It was billed as a battle of wrestling vs. jiu-jitsu, but Phil Davis ultimately chose to let his hands do the talking against Vinny Magalhaes. The former NCAA All-American wrestler at Penn State University outstruck Magalhaes for three rounds to earn a unanimous verdict (30-27, 30-27, 29-28) in the light heavyweight matchup.

Magalhaes (10-6, 1-3 UFC), the 2011 Abu Dhabi Combat Club Submission Wrestling World Championships gold medalist, invited Davis into his guard on several occasions, but the Alliance MMA product wisely chose to keep the action standing. “Mr. Wonderful” set the tone by rocking his foe with a head kick in the first round, but it was a solid jab and steady stream of one-two combinations that kept Magalhaes on his heels.

Magalhaes’ most significant moment came in round one, as he scored his lone takedown of the fight and briefly took his opponent’s back. Davis did not take long to escape the predicament, and he resumed his standup assault on the Brazilian from there. According to FightMetric.com figures, Davis outlanded Magalhaes by 50 significant strikes over the course of the three-round affair.

“I’ve been working on a lot of things for this fight. There was a lot of back and forth before this fight, but all I can say is thanks to Vinny for helping me elevate my game to the next level. It’s just a beautiful thing when you’re able to work on something and it comes true,” Davis said. 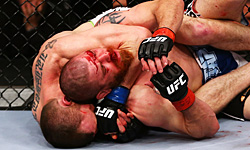 Al Bello/Zuffa LLC/UFC/Getty
Healy choked Miller out cold.
Pat Healy looks like a valuable addition to the UFC’s loaded lightweight division. The would-be Strikeforce title challenger beat Jim Miller at his own game, submitting the AMA Fight Club product with a rear-naked choke 4:02 into the third round of their lightweight contest.

“I’m so pumped. I’ve been through so much in my career. There’s one thing you can never question about me, and that’s my heart. No matter what, I’m always going to be in the fight,” Healy said.

Miller (22-5, 11-4 UFC) started quickly, landing solid left hands and leg kicks in round one before eventually taking the fight to the ground. From there, he threatened with an armbar and nearly earned a stoppage with a furious salvo of ground-and-pound as the opening frame expired.

Healy (30-16, 1-1 UFC) began to impose his will in round two, taking his opponent to the floor and landing offense from inside Miller’s guard before threatening with a rear-naked choke. The larger Healy continued his assault in the final stanza, as he used more physical ground-and-pound to work his way to Miller’s back, choking the New Jersey native unconscious.