Jon Jones continued to justify the hype surrounding his young career Sunday at UFC on Versus 2.

It was a short night for the prodigious talent, who barely broke a sweat in dismantling Vladimir Matyushenko with a salvo of elbows from top position at just 1:52 of the opening period.

Jones hit a takedown on his advancing opponent after landing a spinning back kick. He quickly moved into dominant position -- a mounted crucifix that tied up both of Matyushenko’s arms. Once set up on top, Jones hammered the defenseless Matyushenko with no less than 10 elbows before referee Herb Dean felt it was time to end the barrage.

“My goal is to become one of the best in the world, if not the best in my weight class,” Jones said. “Whoever the UFC decides to give me, I’ll be ready for it. I’ll train my butt off, and I just hope that Joe Silva and Dana [White] really kick it up with me and give me some really, really tough guys.”

Yushin Okami tossed his hat back into the UFC middleweight mix with a split decision over former NCAA wrestling champion Mark Munoz in a grueling battle of attrition.

After missing out on a shot at champion Anderson Silva due to an injury, Okami was sent to the back of the line last October and was outpointed by current No. 1 contender Chael Sonnen. His workmanlike effort against Munoz is his second win a row.

With each fighter pocketing clear-cut rounds -- Munoz the second and Okami the third -- the outcome came down to how the first was tallied. There was very little action in that period, but Okami did foil all off Munoz’s takedown attempts and he landed the only meaningful strikes.

Munoz banked the second frame on the strength of a big right hand that knocked Okami to the mat, but he could not capitalize after Okami regained his wits and clinched up with him.

The third round was much more lopsided. Okami took advantage of his fading opponent, who was fatigued after numerous missed takedowns. Okami flurried, and Munoz covered up and halfheartedly shot for more takedowns that he was unable to complete.

“I was surprised,” Okami said of the judges being split on the decision, “but Munoz was a really good fighter.” 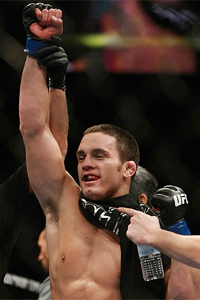 Jake Ellenberger took a big step forward in the UFC welterweight division by finishing John Howard on a third-round doctor’s stoppage. Howard’s left eye was badly swollen from a slew of elbows in the second round, and he showed tremendous heart in answering the bell for the third.

Ellenberger employed his wrestling ability to speed out to an early lead on the cards. Meanwhile Howard made the most of the brief time he spent upright by trying to strike with Ellenberger. He came close with a nice hook early in the first and a big head kick to start the second, but he could not stay off his back long enough to win a round.

Knowing he needed a finish after dropping the first two frames, Howard opened the third with a flying knee that missed but followed it up with punches that put Ellenberger on the defensive. Like he had done over and over in the bout, Ellenberger simply changed levels and planted Howard to the canvas, where he had his way with him.

It was apparent the swelling was limiting Howard’s vision when the standup fighter started searching for a takedown in the final period. He could not get it and ended up on the ground once again. When Ellenberger began to work him over, referee Herb Dean brought in the doctor, who stopped the match at the 2:21 mark.

“He rocked me a few times, but I got some good elbows on him,” Ellenberger said. “Winning [via doctor’s stoppage] is not always the best, but I came out with a ‘W.’”

Takanori Gomi may have been fighting for his roster spot in the UFC’s loaded lightweight division, but there were no sign of nerves for the former Pride FC champ in his bout with Tyson Griffin.

With a ringing right hook just 64 seconds into the fight, Gomi flattened Griffin and answered critics who felt his style would not translate to the Octagon after his loss to Kenny Florian in his March UFC debut.

Gomi began the match by digging to the body with heavy punches while Griffin pushed forward looking for openings of his own. Those openings never materialized.

Gomi fired a left hand lead that missed its mark, and Griffin answered with a leg kick. Undeterred, Gomi crushed his foe with a right hook to the jaw that sent Griffin crashing to the mat face first.

Referee Jason Herzog immediately intervened, pulling Gomi off a prone Griffin to give “The Fireball Kid” his first UFC victory.

“This is what I consider my start in the UFC,” Gomi said through an interpreter. “The first time I was here, I really didn’t know how to fight [in the U.S.]. You saw what happened today. I think I’ve got the hang of it.”