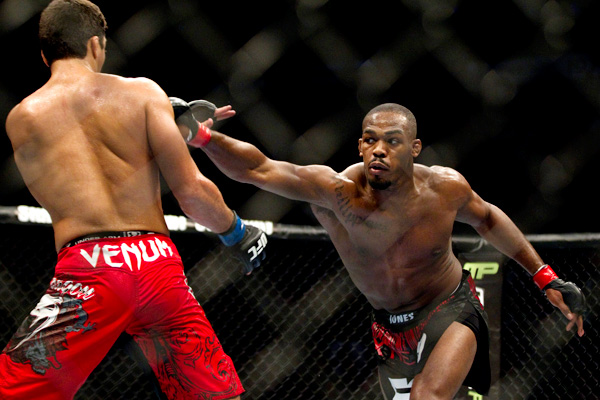 Jones (15-1, 9-1 UFC) kept his stranglehold on the 205-pound division with a riveting victory over Machida in the UFC 140 main event on Saturday at the Air Canada Centre in Toronto. The 24-year-old champion trapped Machida in a standing guillotine choke against the cage and rendered him unconscious 4:26 into round two.

The man they call “Bones” has finished all four of his opponents in 2011, three of them -- Machida, Quinton “Rampage” Jackson and Mauricio “Shogun” Rua -- former UFC champions.

“It’s not really a move that I practice,” Jones said. “I just think it’s a move that comes natural from wrestling for so many years. It was a great lock. I realized that I had it, and I knew that I just needed to be tough and hold the position and eventually he’d run out [of air]. I could tell [he was asleep] after a while.”

Machida (17-3, 9-3 UFC) dented the Jones aura in the first round, as he darted in and out, countered effectively and connected with more than one straight left hand. Jones returned to his corner with a look of concern on his face. In the second round, the champion avoided Machida’s strikes, scored with a takedown midway through period and delivered a wicked elbow from the top that left a nasty gash on Machida’s forehead.

“I know Lyoto is a black belt, so I was expecting a lot more motion on the bottom,” Jones said. “But he didn’t move a lot, and I was able to open him up.”

After the cageside physician checked the cut, the two men engaged again on the feet, and Jones, not known for his punching power, dropped Machida with a counter left hook. As “The Dragon” rose to his feet, Jones pinned him on the fence in a guillotine, and, moments later, Machida went limp.

“He didn’t have me hurt, but he did punch me pretty good and wobble me a little bit,” Jones said. “It was good. I think one of my biggest critic points is that I can’t take a punch, so I’m glad to prove it to myself and everyone else that I can take a legit hit. He’s just really smart. He kicks really hard, and he knew his range. He has great tactics. He was definitely a very tough puzzle.”

Former heavyweight champion Frank Mir became the first man to submit Brazilian great Antonio Rodrigo Nogueira in mixed martial arts competition, finishing him with a horrific first-round kimura in the co-main event. The hold snapped Nogueira’s shoulder out of place in gruesome fashion, eliciting the tapout 3:38 into round one.

Nogueira (33-7-1, 1 NC, 4-3 UFC) had Mir badly hurt before the submission. He landed a right hook, backed it up with a left and put Mir on wobbly legs. It went to the ground, and Nogueira swarmed with punches, closing fast on the finish. Somehow, the Las Vegan survived.

“I was stunned. I was really trying to play out the first three or four minutes to see what he was doing differently,” Mir said. “He caught me. I didn’t come up to my knees, so he couldn’t drive into me.”

During a subsequent scramble, Mir (16-5, 14-5 UFC) caught the arm, locked up the kimura and wrenched. Nogueira tried to roll free, but Mir only cinched it deeper. Ultimately, the arm snapped and Nogueira tapped in visible pain.

“I honestly hope that Nogueira ends up being OK,” Mir said. “I idolize him. When you’re our size and you’re as dangerous as we are, things happen. You can get caught. It takes nothing away from Nogueira.”

Pride Fighting Championships veteran Antonio Rogerio Nogueira stopped former light heavyweight champion Tito Ortiz with brutal ground-and-pound to the body in the first round of their 205-pound bout. Nogueira (20-5, 3-2 UFC) finished it 3:15 into round one.

In the clinch, Nogueira was the superior fighter. He backed up Ortiz with consecutive left hooks and swarmed. A brutal knee to the body sent Ortiz to the canvas. He did not return to his feet. Nogueira stormed into his guard and unleashed a wicked series of punches and elbows to Ortiz’s ribs. The fading former champion turned away in pain, leaving referee Yves Lavigne no choice but to step in.

“I feel so great. It’s like a dream come true to beat Tito Ortiz,” said Nogueira, who halted the first two-fight losing streak of his career. “He’s a legend in this sport. I want to say thanks for this fight with him. I knew he was going to try [to be aggressive early] because, in his last two fights, he came out very aggressive. I was very prepared, and I was in the best shape of my life.”

Ortiz, who has lost five times in his last six outings, said afterward that he hoped the UFC would honor the final fight on his contract.

“He caught me clean in the same place as when I fought Rashad [Evans at UFC 133],” he said. “It was the exact same spot. Nogueira is the true champ, man. I gotta take my hat off to him. He hurt me. I tried to get up, but every time he hit me there, I felt the wind completely go out of me.”

The well-traveled Brian Ebersole recorded his 10th consecutive victory, as he eked out a narrow split decision over Claude Patrick in a tightly contested welterweight scrap. All three cageside judges scored it 29-28, two of them in favor of Ebersole (49-14-1, 1 NC, 3-0 UFC).

The two welterweights engaged in a tactical battle from the start. Ebersole did much of his work in the clinch, pressing the Canadian into the cage while working short elbows, punches and knees at various levels. Patrick (14-2, 3-1 UFC), who entered the cage on a 13-fight winning streak, threatened with chokes in the first and third rounds and wobbled Ebersole with consecutive left hooks in the second.

However, he could not prevent Ebersole from closing the distance and succumbed to a pair of third-round takedowns.

“I was upset because I wasn’t able to do a lot of the things I’d hoped to be able to do,” said Ebersole, the Tapout logo shaved into his chest hair. “The takedowns were hard to come by, and he had good defense on the ground. I didn’t get hit, which is what I always come to do, and I come to win the wrestling, which I did tonight. I’m very thankful to get a decision in his hometown.”

Korean Top Team standout Chan Sung Jung stopped former UFC featherweight title contender Mark Hominick seven seconds into the first round of their 145-pound showcase. The result stunned the partisan Canadian crowd, many of them there to support Hominick (20-10, 1-2 UFC).

“I’m always expecting to get a good win, but this feels great,” Jung said. “Just because I’ve been knocked out doesn’t mean I’m [not] a great striker. I think I’m one of the best strikers in the world.”

A perfectly timed and delivered straight right hand ruined Hominick’s night, as he threw an errant left hook, left his chin unprotected and paid the price. Jung (12-3, 2-0 UFC) followed him to the floor and landed a series of unanswered blows to force the stoppage.

“I’m going to give it up to him,” Hominick said. “I came out a little too wild. I really wanted to hit him with a clean shot. I know he keeps his hands down. I’m definitely disappointed. I got a little too hyped up. You’ve seen me fight before, and I don’t fight reckless. I came out with a wild left hook. I just really wanted to get it done tonight.”