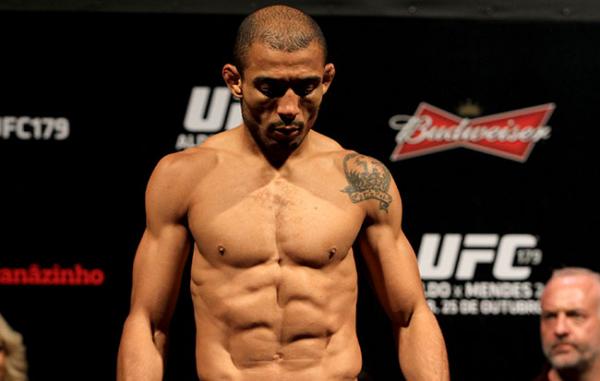 Jose Aldo is one of the sport's pound-for-pound best. | Photo: Gleidson Venga/Sherdog.com


While the featherweight title picture remains murky, at least when it comes to who is the division’s No. 1 contender, there is no question as to who sits atop the heap.

UFC President Dana White, who criticized Jose Aldo following a lackluster five-round verdict over Ricardo Lamas in February, was thoroughly impressed by the featherweight king’s performance on Saturday night. In one of the top fights of 2014, Aldo retained his 145-pound strap with a hard-fought, 25-minute triumph over Chad Mendes in the UFC 179 headliner in Rio de Janeiro.

“This fight was such a great fight and Chad Mendes came in, got right in his chest and they went at it. I think he brought the best out of Jose Aldo tonight,” White said at the post-fight press conference. “This is the greatest featherweight championship fight that I’ve ever seen. This fight took Jose Aldo to another level. Everywhere. All over the world. Not just in Brazil. Tonight’s fight was unbelievable.”

Related: Matches to Make After UFC 179


During an interview on Fox Sports 2, White said that Conor McGregor would “probably” receive the next title shot with a win over Dennis Siver at UFC Fight Night in Boston on Jan. 18. Aldo, when asked about the brash Irishman, compared McGregor to another outspoken fighter who made a name for himself fighting a Brazilian champion.

"He's a guy who just talks," Aldo said. "He hasn't fought anyone as tough as us. So to get here right now and talk, I've heard that a lot. Chael Sonnen did that a lot in his weight class, and now he's lost, so he can talk as much as he wants."

Later, the Nova Uniao product admitted that there is value in the promotional aspect of MMA. Should a fight with McGregor come to fruition, Aldo says that he would do his part to sell the bout.

“Every fight interests me. It doesn’t matter. When I arrived here, I dreamed about being the champion, so I didn’t see that side. Today we have to thing on the other side, the financial side. It’s part of our work,” Aldo said. “If it’s Conor, or whoever it is, I’m always gonna give everything I have to promote the fight. And then that way, outside of the ring we also win, and that’s very important. The more we promote the fight, the more sellable the fight is, and that makes my job easier.

“I can’t just think about going in there and winning; there’s a lot of people that depend on me. If it’s Conor, we’re going to do great promotion and a great fight.”

If McGregor does cement himself as the division’s No. 1 contender, he will have his hands full with Aldo, who, according to White, is on the short list as one of the sport’s best -- in any weight class.

“First of all, I don’t make that decision [about pound-for-pound rankings],” White said. “But, he’s definitely one of the pound-for-pound [best]. It’s either him or Jon Jones.”