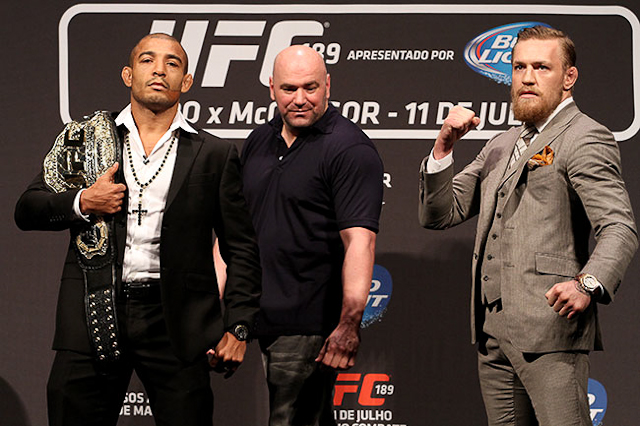 
The Ultimate Fighting Championship featherweight titles will be unified by year’s end, according to a report from Yahoo Sports.

When the promotion announced its 2015 schedule, UFC 194 was slated for Dec. 5 and a UFC Fight Night card was penciled in for Dec. 12. However, plans changed due to an Andrea Bocelli scheduled for Dec. 5 at the MGM Grand which would have moved UFC 194 to the smaller Mandalay Bay Events Center.

According to White, as recently as last Thursday, he believed UFC 194 would be held at the Dallas Cowboys’ stadium in Arlington, Texas. However, said the UFC boss, “MGM really wanted the fight and they made effort for it, and they got it.” White also stated that Ronda Rousey’s upcoming title defense against Miesha Tate will not take place on the same card as Aldo-McGregor.

Aldo and McGregor were supposed to meet in July at the heavily promoted UFC 189, which also took place at the MGM Grand. However, Aldo withdrew from the bout due to a rib injury, leaving McGregor to fight late replacement Chad Mendes for the interim strap. The “Notorious” Irishman claimed the belt by punching out Mendes late in the second round.