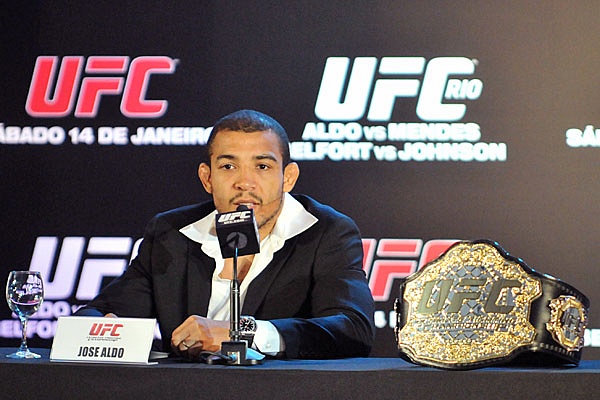 Aldo’s title clash with Koch has been “postponed,” according to an official release, though a timetable for when the bout might occur was not revealed. UFC 149 will now be headlined by a transplanted interim bantamweight title fight between Urijah Faber and Renan Barao. Faber and Barao were originally expected to collide July 7 at UFC 148 in Las Vegas but will instead square off two weeks later, July 21, at Scotiabank Saddledome in Calgary, Alberta.

A former World Extreme Cagefighting featherweight champion, 33-year-old Faber has won three of his last four outings. Faber joined the UFC’s bantamweight ranks last year, outpointing another ex-WEC titlist in Eddie Wineland before challenging Dominick Cruz in a rematch of their 2007 featherweight clash. Faber came up short in last July’s return bout, and “The Dominator” retained his UFC bantamweight title. The Californian was last seen submitting yet another former WEC champion, Brian Bowles, with a guillotine choke Nov. 19 at UFC 139.

Just 25 years old, Barao rides a 27-fight unbeaten streak into his showdown with Faber. The Nova Uniao product has been perfect in his UFC career thus far, outpointing Cole Escovedo in his Octagon debut and closing out 2011 by submitting Brad Pickett in November. Barao most recently competed at UFC 143 on Feb. 4, decisioning former title challenger Scott Jorgensen at UFC 143.