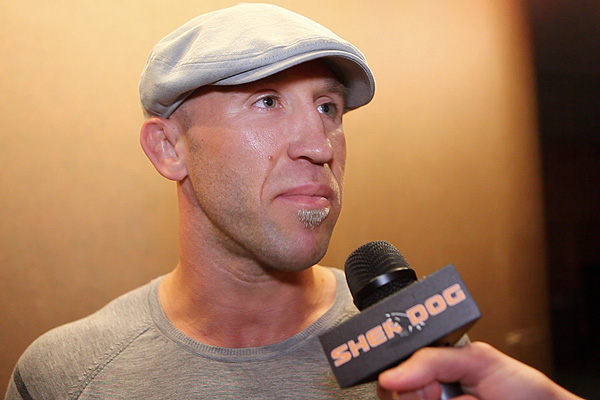 Josh Burkman expects to become a champion Saturday at World Series of Fighting 6 (undercard streams live and free on Sherdog.com).

The WSOF welterweight title will be on the line when the 33-year-old takes on Steve Carl. Ahead of the matchup, Burkman joined the Sherdog Radio Network’s “Beatdown” show to discuss his opponent, his future and more.

On Carl: “I’ve shared a locker room with him in the World Series of Fighting both times that he’s fought. Backstage, we chatted a little bit. My chiropractor actually adjusted him and loosened him up for both of his fights. He said to my chiropractor, ‘The next fight, when me and Burkman are fighting, you’re not going to be able to adjust me, are you?’ My chiropractor looked at him and said, ‘Hey, we want you at your best. I’ll take care of you.’”

On respecting his opponent: “There’s a lot of respect between me and Steve Carl. Steve Carl’s been in Bellator. He’s won six in a row. All of those fights were in the first round at the professional level, which anybody knows that anybody who’s done that is the real deal. He’s worked his way to this title shot every bit as much as I have. I’m really looking forward to the fight and the challenge.”

On whether a title bout against Jon Fitch would have generated more attention: “I think the World Series of Fighting could have taken advantage of that fight with me and Fitch. I think they could have gave him another opponent, and then me and Fitch could have fought for the title. It may have been a bigger fight. … But I think that Steve Carl is the person that deserves this fight. He’s 2-0 in the World Series of Fighting. He’s won six fights in a row, but the thing about it is, Steve Carl is stepping up in competition. You look at his record and in his last three fights, he’s beaten very average, under average fighters. … This is a big stage for him. I need to just keep my head on straight, stay focused and realize this is the biggest fight Steve Carl’s had.”