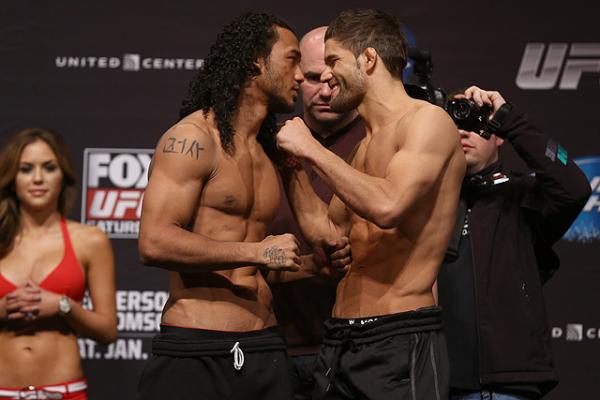 Josh Thomson dropped a controversial split decision to Benson Henderson on Jan. 25 at UFC on Fox 10.

In an interview Wednesday with the Sherdog Radio Network’s “Beatdown” show, Thomson discussed his opponent, how he scored the fight and more.

On his injuries: “Monday afternoon I had surgery on my thumb and parts of my hand and then [I’ll] possibly have surgery on my ankle. I had a fracture going into the fight on my ankle that we thought was a high-ankle sprain, but it was really just an actual little bone chip in my ankle.”

On whether his ankle affected his movement: “Not at all, not at all. As the fight went on, it started hurting to kick a little bit. In the end you noticed I was getting away from my kicking. There was a lot of things going through my mind obviously during the fight. You could tell [by] the look on my face and just how the fight was going. I’m not that type of fighter where I just sit back and chill for a little bit. When you’re fighting a left-handed fighter, everything comes off your right hand lead, and given what was going on with my right hand, it just felt like all my setups, everything I’d been training and practicing and drilling came off of that right hand lead. It wasn’t something I was really, I guess, mentally prepared for. It kind of just frustrated me and really got to me. That’s not normal for me. I don’t normally get frustrated in a fight like that. I can usually work around things.”

On his hand: “It happened in the first round. I couldn’t tell you exactly when it happened in the first round. All I know is I got back to the corner, and the commissioner was standing right there and [coach Javier Mendez] goes, ‘Why aren’t you throwing your punches? You’ve got to let your hands go more.’ … I said, ‘Something’s wrong with my hand.’ I looked down and I pushed a little on my thumb, and the commissioner was standing right there, my corners were standing there, and my whole thumb just kind of flopped back towards my wrist. It almost put me in shock. … It kind of disgusted me, like, man, what’s going on? I just knew it hurt. I didn’t know the severity of it until I saw it flop back, and the commissioner even looked away. He grimaced and looked away and was like, ‘Hey, you want me to stop the fight?’ There’s not really anything you can do about it. Let’s just see what happens.”

On how he scored the fight: “I actually gave myself three rounds to two, and then when I watched it when I came back, I could see people giving me four to one. I could have seen that, but I’m a little bit more critical of myself and I gave myself three-two.”

On judging: “I think it’s just something that we’ll continue to complain about, but in the meantime I’m still sitting here with a loss on my record that I shouldn’t have.”

On Henderson: “Every time he got close to me, I felt like I was able to get to the body lock and just take him down. … All the things that I had in my mind with him being strong, being a hard kicker, all those things, they weren’t true. I put those in my head just from listening to commentary and from other people talking about how hard he kicks or how strong he is and these types of things. We got in there and locked up the first couple of times and I didn’t feel intimidated at all. … Let me just tell you, he’s not strong. He doesn’t hit hard. He’s not strong. He doesn’t kick hard. All those things -- none of those things apply. He’s a good athlete. He’s a good fighter. I’ll give him a lot of credit, but the things that people think hurt didn’t hurt at all.”

Listen to the full interview (beginning at 39:27).