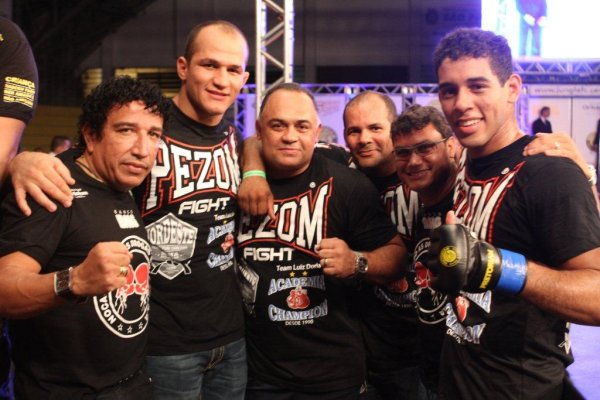 For the second time, a fight between Junior dos Santos and Alistair Overeem will not happen on schedule.

Last year, a pre-fight drug screen revealed that Overeem’s testosterone to epitestosterone levels were more than double the allowable limit, leading to the cancellation of his bout with dos Santos at UFC 146. On Wednesday, Overeem withdrew from a proposed UFC 160 meeting with “Cigano” due to an injury, and UFC President Dana White later announced that the bout would be postponed until this summer.

In an interview with Sherdog.com, Luiz Dorea, dos Santos’ coach, was skeptical about Overeem’s injury and endorsed the idea of Mark Hunt as a replacement opponent for his fighter. However, White recently revealed on Twitter that Hunt turned down the fight with dos Santos.

"We're not here to doubt, but it's really strange. Cigano's career does not depend on Overeem, but it's the second time that the fight has been canceled,” Dorea said. “What cannot happen is for Cigano to be penalized for it. He never chooses opponents, always accepts any fight and Hunt would be a good name. Injured or not, Overeem won't cause any setbacks for Cigano, who already had to start a camp and doesn’t want to go any longer without fighting. It seems that Overeem doesn't want this fight."

Dorea insisted that there is something amiss regarding the injury to the former Strikeforce champion. A blood test following Overeem’s knockout loss to Antonio Silva at UFC 156 revealed abnormally low testosterone levels for a competitive athlete. While Dorea would not directly say that he believes Overeem is using the injury to allow his testosterone levels return to normal, the trainer remains perplexed by the Dutchman’s withdrawal.

"About that I do not know, but there's something weird there. It is reported that there was an injury, which we have to believe. Overeem is a great athlete, but he has his problems," Dorea said. “What will happen is that everyone who has a scheduled fight against Overeem will be [unsure if it will take place]. This is the second time that Cigano has prepared for this fight, and this requires dedication and money. This postponement will not obstruct Cigano's plans to seek the title shot soon after this fight.

"What else can happen in July, August? Will there be another story, another problem with the lab, or an injury?” Dorea continued. “There are great names in the division without a fight scheduled, .... but Overeem is also a great duel. Except that Overeem teases Cigano, and every time we get close to the fight, we do not know what happens. It's a difficult situation. But I'm quiet, and the UFC is watching."