For the second time in two months, Edilberto “Crocota” de Oliveira and Sergio “Junior” Melo couldn’t live up to the hype.

However, Saturday night at Jungle Fight 25 in Vila Velha, Brazil, resolution in a rematch between of Brazil's most well-respected welterweights was achieved.

After their controversial draw at Jungle Fight 24 last December, which divided the Brazilian MMA community, it was Melo who prevailed in the rematch, taking a split decision after three rounds.

Both fighters started out slowly, looking hesitant to engage in exchanges. After the feeling-out process, it was Melo that started to surge ahead of de Oliveira, landing the majority of hard, clean strikes. Aside from a straight right that buckled Melo’s knees in the latter part of the opening frame, it seemed that “Crocota,” who displayed angry facial expressions throughout the fight, never seemed to do any real damage in the duel.

While every round of the fight was close, they all followed the same pattern with “Junior” winning most of the exchanges and Oliveira, unable to hurt his opponent on the feet, eventually trying to take Melo down. “Crocota” also had a point deducted in the third period after landing a punch to the face as referee Carlos Barreto intervened to restart the fight. In the end, Melo got a well-deserved decision win, even if one of the judges somehow saw the fight in favor of “Crocota.” As is common in Brazil, no official judges or scores were announced.

Melo is undefeated since his joining forces with Renovacao Fight Team. 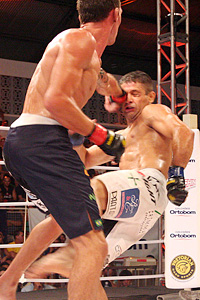 G. Venga
“Moicano” remains undefeated.
It was a strong night for prospects from Constrictor Team, as the gym that produced Rani Yahya and Paulo Thiago saw two of their young stars, Renato “Moicano” Carneiro and Francisco “Massaranbuda” Drinaldo get strong wins.

Carneiro survived his first real test to snag a unanimous decision victory against super-tough Fortaleza, Brazil, native “Andrezinho” Nogueira. After starting out strong and connecting with several hard strikes to NogueiraÂ´s face, “Moicano” got dropped by a huge right cross from Andrezinho. The Fighter Sport product pounced on “Moicano” with a barrage of punches that seemed to have him on the brink of defeat. However, the 21-year-old managed to absorb the damage and recover.

Even after enduring a brutal display of ground-and-pound, Carneiro didn’t change his approach in the second and third rounds of the fight. He still came out as the aggressor, chasing Nogueira around the ring and using his reach advantage to control the distance and outstrike his opponent.

“Moicano” showed why he is one of the best Brazilian prospects by overcoming a terrible first round en route to winning stages two and three and rightfully getting a unanimous decision win to advance to 4-0 in his young career.

“I know I lost the first round; I don’t have to ask anyone about that,” proclaimed Carneiro after the fight. “I was hit in the face like I’ve never been hit before, but I wasn’t about to give up.”

Carneiro’s teammate Drinaldo put on a beating on tough Hikari fighter Joao Paulo, who took the bout on short notice after Rodrigo Damm pulled out of the contest. 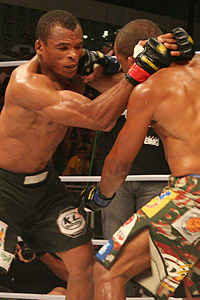 
Looking much smaller than his opponent, Paulo couldn’t put any offense together against “Massaranduba,” who’s on the comeback trail after losing in the Jungle Fight lightweight grand prix to UFC lightweight Yuri “Marajo” Alcantara last September.

Using his size advantage to bully Paulo, Massaranduba’s game plan consisted of getting his opponent to the ground and brutalizing him with punches. Drinaldo spent all three rounds on top of his prey and punishing with hard punches en route to the decision win.

Unbeaten heavyweight Edinaldo Oliveira is known as “Lula Molusco,” the Brazilian name for Spongebob Squarepants’ compatriot Squidward, but he was dead serious against Antidio Neto. It took just 63 seconds for the 6-foot-7 Baiano to launch a crushing right cross that knocked his foe out cold, and left him on the mat unconscious for two minutes. Neto eventually left the cage under his own power.

In a potent display of wrestling, middleweight up-and-comer Marcelo Guimaraes double-legged Paulo Henrique Garcia Rodrigues repeatedly for three rounds. So potent was the wrestling of “Magrao” that in the second round he actually drove Rodrigues to the mat over top of referee Fabiano Frances, who had his shoe knocked off in the display of explosiveness. Guimaraes slowed late, but took a deserved unanimous decision in the end.

In another middleweight affair, Vila Velha native Wilians Santos opened up a gash on the face of Ascir Caetano that forced a doctor stoppage in the third round, giving the popular local the TKO victory.

The evening’s opener saw Luiz Guilherme de Andrade punch out Valdir Silva at 3:40 of round one.