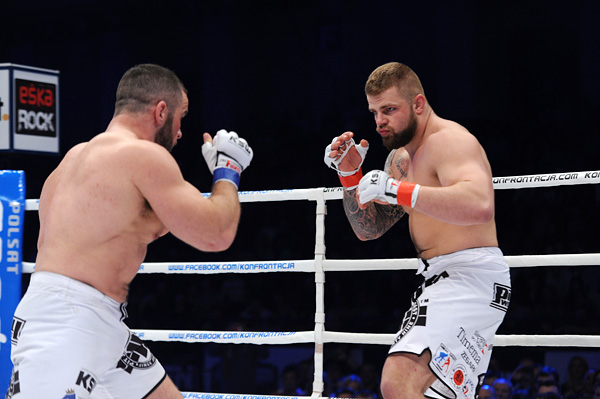 Karol Bedorf (right) is one of the top heavyweights in Europe. | Photo: Piotr Pedziszewski/Sherdog.com


Karol Bedorf will defend his Konfrontacja Sztuk Walki heavyweight title in November when he faces Michal Kita in the co-main event of KSW 33.

Bedorf, 31, captured the vacant KSW heavyweight title in September 2013, when he punched out Olympic judo gold medalist Pawel Nastula in the second round. His lone defense of the belt came in a first-round knockout of Rolles Gracie in October 2014. Most recently, “Coco” took a unanimous decision over kickboxing veteran Peter Graham at KSW 31 in May.

Materla, 35, will make his KSW debut after 23 bouts and nearly 10 years spent competing in Poland and abroad. “The Massacre” is best known to American fans for his 2010 appearance in Bellator, where he was submitted by Dave Herman in his lone bout for the promotion. He will enter his bout with Bedorf on a two-fight winning streak, though he has been out of action since March 2014.