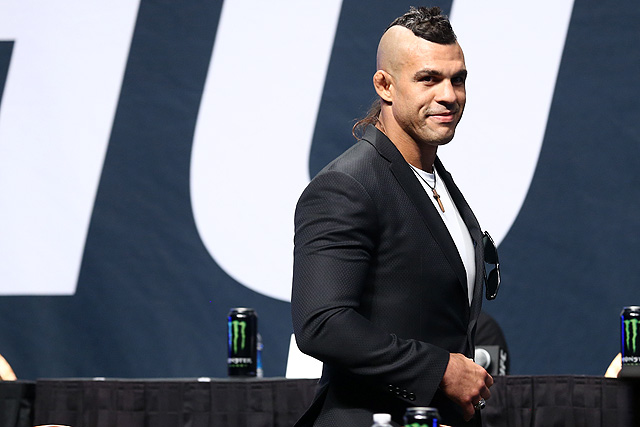 Vitor Belfort switched up his training ahead of his Nov. 7 bout. | Photo: Dave Mandel/Sherdog.com


Shotokan karate legend Vinicio Antony was the discipline’s number one representative in Brazil during the 1990s, before Lyoto Machida and Chinzo Machida burst on the scene.

Antony, who has dedicated his life to karate as a trainer, has been training Vitor Belfort since “The Phenom” fought Heath Herring under the Pride Fighting Championships banner in 2001. However, it was not until Belfort faced Rich Franklin at UFC 103 that the two men started working together on a camp-to-camp basis, and they will join forces again for the former champion’s trilogy bout with Dan Henderson at UFC Fight Night 77 on Nov. 7 in Sao Paulo, Brazil.

There was one notable change to plans. Belfort will not be training with the Blackzilians.

“Vitor called me saying that he wanted to make a different camp now,” Antony told Sherdog.com. “He left the Blackzilians and decided to make his own team, OTB, also in Boca Raton, Fla., and wanted to bring together more of a family team to build new energy in this new phase of his career. I could only stay for 20 days, but we used that time in the best way possible.”

“Vitor showed some holes in his game in the last fight [against Chris Weidman], so we started working on the basics of the gentile art and at the same time worked on the principles of karate, which are distance and timing,” said Antony, a jiu-jitsu black belt under Alliance MMA’s Alexandre Paiva. “We also did some tactical drills centered on Henderson’s game.”

The all-time series between Belfort and Henderson stands at 1-1. However, the Brazilian got the best of the former two-division Pride Fighting Championships titleholder in their most recent meeting, where he wiped out Henderson with a head kick in just 77 seconds in November 2013. Antony expects more of the same.

“We’re preparing to run him over,” he said. “If everything goes right, we’ll see Henderson get run over by a truck again. Vitor is really focused, and we’re working on a strategy to fight an intelligent fight. When you fight Henderson, you’re concerned with his power. Of course, his overhand is dangerous, but he fought Lyoto [Machida] for three rounds and didn’t land one of them. If you fight him the right way, his strongest weapon can be easily neutralized. Vitor is a much more skilled fighter and has more weapons to win that fight.”

Antony gave his approval to the sparring in which Belfort was engaging with his new team.

“When there’s a big team, there’s always a guy who wants to leave a mark or take a bite out of a renowned fighter,” he said. “Here at OTB, Belfort was joined by a very nice group of teammates, like Caio Griffin, Cassiano [Ricardo] ‘Tsytcho’ [Castanho de Freitas], Jordan Jones and some guys that normally help him, like Gilbert ‘Durinho’ [Burns], Tiago Silva and [Cesar] ‘Mutante’ [Ferreira]. We’re doing light sparring every day, but responsibly and in a great atmosphere.”

“Of course, his body needed some time to adapt without TRT, but I can say now that, through supplements and also the very nice work of a nutritionist, Vitor is totally adapted and is in great cardio and physical shape,” he said. “I can guarantee you that you’re going to see a new version of Belfort.”

“They normally train jiu-jitsu, wrestling and muay Thai,” Antony said. “Usually, most MMA fighters think karate is funny, like Jake Ellenberger said to Stephen Thompson before getting knocked out. By the way, that guy (Thompson) is the best current example of how well-executed karate is a great weapon for MMA. Vitor is a very intelligent guy. He realized how good karate can be for MMA, and we’re working on it.”