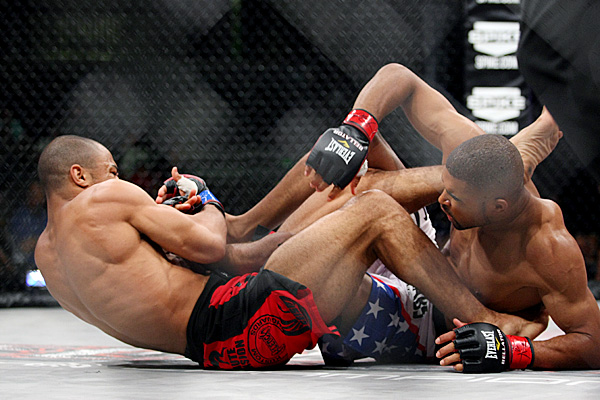 “He’s an amazing fighter. I have a lot of respect for him,” said Amoussou, who left with a $100,000 payday and the right to face reigning Bellator welterweight champion Ben Askren. “I feel great. This is all my life. Here I am.”

The two men traded kicks from the start, before an accidental eye poke from Baker brought a brief halt to the action. The match resumed soon after. Amoussou (16-4-2, 4-1 Bellator) fired off a leg kick, clinched Baker from behind and rolled into the heel hook for a spectacular submission. Baker tapped almost immediately. K. Mills
Daley smoked Bears quickly.
Strikeforce and UFC castaway Paul Daley introduced another unfortunate adversary to his left hook, as he stopped Rudy Bears on a first-round technical knockout in a featured welterweight matchup. Bears (14-11, 2-6 Bellator) met his end 2:45 into round one, as he lost for the fourth time in five fights.

Daley (30-12-2, 1-0 Bellator) trapped the 33-year-old in the Thai plum, fired some blistering knees into his body and punctuated his fight-ending volley with a clean left hook. Bears folded where he stood, ate a glancing hammerfist to the back of his head on the way down and absorbed another ground strike before referee Troy Waugh stepped in. Vegh kept the fight standing against the Reign MMA representative and countered effectively with accurate punches and kicks. Newton (18-7-1, 1-1 Bellator) was the busier of the two semifinalists, attacking the Slovakian with heavy right hands and stout kicks to the legs and body. However, Vegh stonewalled his attempted takedowns and shut down his clinch game, perhaps swaying the judges to his side. Carpenter (9-2, 4-2 Bellator) had no answer for Wiuff’s takedowns, clinch game or ground-and-pound. The rugged Minnesotan secured takedowns in all three rounds, stayed heavy on top and neutralized Carpenter’s guard with a steady stream of punches and hammerfists. Wiuff’s current winning streak is his longest since he won nine in a row between Aug. 11, 2007 and June 8, 2008. K. Mills
Zaromskis punched his way
through Spiritwolf again.
Former Dream champion Marius Zaromskis sprawled, stalked and punched his way to a split verdict over Waachiim Spiritwolf in a welterweight showcase. Two of the three cageside judges scored it for Zaromskis: Richard Davis by a 30-27 margin and Mike Ross by a 29-28 count. A third judge, Don Balas, cast a dissenting 29-28 nod for Spiritwolf (9-11-1, 1-2 Bellator).

Zaromskis (18-6, 2-0 Bellator) fought at a measured pace, backed down his opponent and scored with clean, accurate punches down the middle. Spiritwolf landed a counter here and there, cutting the Lithuanian in the first round, but his offense was sporadic at best and his inactivity cost him. Zaromskis, 31, has rattled off four wins in a row and figures to partake in Bellator’s next welterweight tournament. 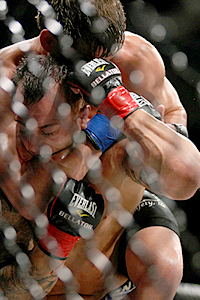 Barrow (5-2, 1-0 Bellator) had no answers through much of the fight, as his opponent struck for multiple takedowns and carried out his game plan in the clinch. However, in the third round, Carapelluci tried for an ill-timed trip takedown, failed to execute it and found himself in a vulnerable position on the mat. Barrow took his back immediately, cinched the choke and waited for the tapout. K. Mills
Saunders destroyed Warren quickly.
A series of savage knee strikes from the Thai plum carried “The Ultimate Fighter” Season 6 alum Ben Saunders to his sixth win in eight outings, as he stopped journeyman Brian Warren on a first-round technical knockout. Warren (18-16, 0-1 Bellator) met his end 22 seconds into round one, his five-fight winning streak a thing of the past.

Saunders (14-5-2, 5-2 Bellator) ducked a punch, initiated the clinch and slammed one knee after another into his foe’s head. Warren ultimately collapsed under the barrage, and Saunders sealed it with punches from the back. The attack left Warren with a gnarly cut above his left eye. Moss (5-3, 0-1 Bellator) held his own in the first round, but Amaya found another gear in the second. There, the once-beaten Floridian delivered a takedown and unleashed a relentless torrent of ground-and-pound that resulted in the finish, as Moss appeared to suffer a shoulder injury. Keith Mills
McCook cooked up an upset.
Matt McCook threw the brakes on a two-fight losing streak with a split decision over previously unbeaten Reign MMA export Shanon Slack in an undercard duel at 145 pounds. All three of the cageside judges scored it 29-28, two of them siding with McCook (9-5, 1-0 Bellator).

His game plan laden with takedowns, Slack (4-1, 1-1 Bellator) stormed out to an early lead but faded down the stretch. By round three, he had little left in the tank, found himself trapped on the feet and even succumbed to a late takedown. The work was enough to earn McCook the nod on two scorecards.


Xtreme Fighting Championships veteran Julien Williams made a successful promotional debut, as he rendered Ryan DeRocher unconscious with a second-round arm-triangle choke in their preliminary welterweight encounter. Williams (3-1, 1-0 Bellator) finished it 92 seconds into round two.