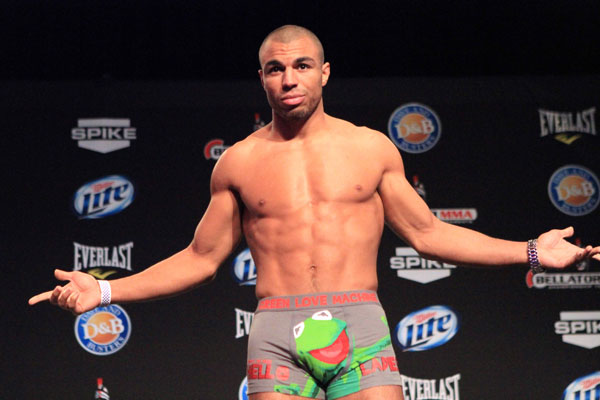 The narrative is plain for anyone who cares to look.

If Karl Amoussou can catch Ben Askren early in tonight’s Bellator 86main event, he might have a chance to wrest away the welterweight title. If not, most believe Askren will grind the Frenchman down for 25-minutes, with Amoussou helpless to resist the wrestler’s potent grappling attack.

Amoussou, however, disagrees that his chances of victory lie only in the bout’s early rounds. Rather, “Psycho” says he is ready to compete for as long as it takes on Thursday night at the Winstar World Casino in Thackerville, Okla.

“I feel ready for five rounds, or perhaps even more,” Amoussou recently said during a media conference call. “Every fight is different. In every fight I’ve [used] quite a lot of high rhythm and tried to win the fight in a different way. My fight rhythm is very [fast-paced], but don’t worry about my cardio. I’m good.”

Though Amoussou will likely enjoy a striking advantage when he meets “Funky” live on Spike TV, he must nevertheless deal with Askren’s wrestling ability, which measures among the best in all of mixed martial arts. Still, Amoussou says he is prepared to meet Askren wherever the fight may be decided.

“I think obviously Ben is a very good wrestler, but that’s not a surprise to anybody. I think I’m the most well-rounded fighter, and you never know what is going to happen with me, so I think that is what gives me the biggest advantage in this fight,” said Amoussou. “Wherever the fight goes, I’m ready for it. A big mistake to make would be to think that Askren is only a wrestler. It would be a very big mistake to underestimate his boxing and ground game, so I’m taking him very seriously. I’m going to fight an MMA fighter, not a wrestler, and I’m ready to fight in any part of the game.”

Despite his reassurances, Amoussou must also answer questions about worst-case scenarios. Namely, how will the Frenchman handle Askren’s pressure and the boos from the crowd if he winds up underneath the two-time Dan Hodge Trophy winner round after round?

“My nerves are very good. I’m calm and cool, and I’m ready for any type of fight,” said Amoussou. “I’m ready to fight standing up, and I’m ready to wrestle and grapple. The fans will probably boo if the fight goes to the ground and he manages to [impose] his game, but I’m coming to win that belt, so I’m not worried about that.”

In promoting the fight, Amoussou has not minced words when asked about his opinion of Askren’s fighting style, calling the champion “boring,” among other things. Tonight, when Amoussou tries to become the first man to overcome Askren’s smothering excellence in the cage, the “Psycho” says fans will have no trouble distinguishing him from his opponent.

“Watch one of my fights, and then watch one of his fights. You’ll know why I called him boring and why I call myself exciting,” said Amoussou. “We have the complete opposite style. My style is to finish people. His style is to lay and pray for five rounds.”