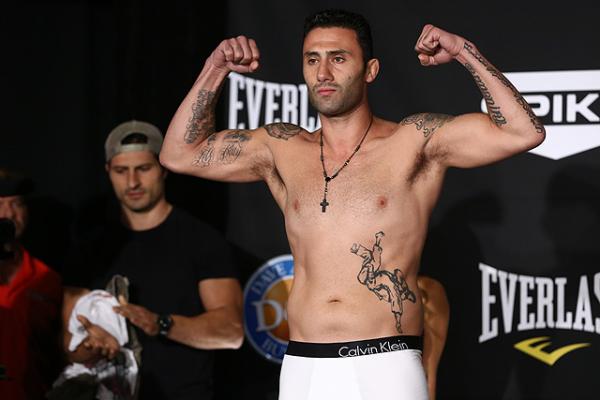 Karo Parisyan believes he has plenty left in the tank. | Dave Mandel/Sherdog.com


At times, it can seem like even Karo Parisyan isn’t quite sure what to make of himself.

In one breath, the judo ace is defiantly predicting a resurgence in the sport. The next, it seems like he’d be just fine without mixed martial arts altogether.

Such is the contradictory nature of “The Heat,” a man who fought Georges St. Pierre in his second UFC bout, beat Nick Diaz in his fourth and was out of the Las Vegas-based promotion completely before he turned 30.

Tonight, the 31-year-old Parisyan will face Phil Baroni in a featured bout at Bellator 122 at the Pechanga Resort and Casino in Temecula, Calif. In many ways, the matchup is the evening’s most interesting, if only because Parisyan and Baroni are two recognizable names hoping to recapture past glory.

However, not all of that recognition is positive. Both Parisyan and Baroni have lost more than they’ve won lately, but that is something the Armenian expects to change – at least when it comes to himself.

“A lot of people are saying a lot of stupid stuff about the fight. They’re saying this is two guys who are washed up or whatever,” Parisyan told Sherdog.com.

“Dude, I’m 31 years old. I was never washed up; I just got sidetracked for a little bit.”

Parisyan admits to coasting early in his career, relying on talent more than work ethic. Wins over Diaz, Chris Lytle, Matt Serra and Nick Thompson helped propel him to title contention in the UFC’s welterweight division. Eventually, his run would be derailed by anxiety issues and pain killers, as well as a lack of drive.

“Karo is the most talented person I’ve ever met in my entire life,” Xtreme Couture wrestling coach Neil Melanson told Sherdog.com in 2012. “What he could do without training at all was amazing. If people saw the kind of life that he lived and then watched his performances, you’d be like, ‘Are you serious?’ Here’s a guy that probably only ate cake the week of the fight, and after weigh-ins he’d have a few cigarettes. That’s the type of guy Karo was.”

Today, Parisyan claims he has a new, more focused approach.

“I take my career a little bit more serious now. I’m still in my prime. There’s a lot more to see,” he said. “I used to cruise on my talent for many years. I still had to train and get in shape and fight, but not like a [Georges St. Pierre], not train like some of these guys that are completely professional from A to Z and live the life. I never lived that lifestyle….eventually it’s gonna catch up with you.”

Parisyan’s Bellator debut was far from memorable, as he was knocked out in the second round by fellow judoka Rick Hawn in April 2013. He rebounded in his next outing, however, stopping Ron Keslar via second-round TKO at Bellator 116. Parisyan believes the promotion brought him in to be a “steppingstone” for Keslar, a notion which he dismisses in typical fashion.

“Hey, give me a break. If I’m in shape, I don’t give a f--k who you are. If I’m in shape I can take the title with my eyes closed,” he said. “I hope this doesn’t bite me in the butt, because I don’t like to talk big before fights – because I believe in karma. But reality is reality, and I can’t lie to myself. I’m pretty sure I can beat almost everybody in the weight division.”

For the most part, Parisyan doesn’t appear to be overly impressed with the Bellator roster. While he says he respects reigning 170-pound champion Douglas Lima, he believes Fernando Vasconcelos, a man he fought at a King of the Cage event in 2003, was probably better.

“I fought Fernando, he was like a Douglas Lima, except he was a two-time jiu-jitsu world champion, a boxing golden gloves champion, a wrestling state champion,” Parisyan said. “He was [Vladimir] Matyushenko’s and Frank Trigg’s coach. I beat him up pretty easy.”

While Parisyan can ooze confidence and project an overwhelming aura of “been there, done that,” there is another side to his bravado. This is the part of him that would be content leaving his current occupation in the rearview mirror permanently for an acting or coaching gig.

“I don’t want to fight forever; I [couldn’t] care less about fighting. I’m over it already,” he said. “I do it because it’s my job. If I had another nice job that had nothing to do with MMA right now but it had good money behind it, I would go do that right now.”

Then again, maybe he would miss it a little bit.

“I still fight because it’s a job, and I’m kind of a glory junkie. I like to get my hand raised at the end of the fight. It makes me feel good about myself,” Parisyan said.