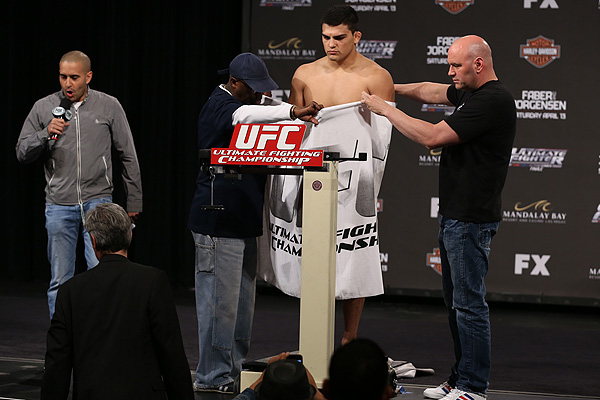 Kelvin Gastelum is moving back down the scale. | Photo: Dave Mandel/Sherdog.com


Kelvin Gastelum’s issues on the scale are well documented.

The “Ultimate Fighter 17” winner emerged as a promising prospect after winning his first five bouts within the Las Vegas-based promotion, including four at 170 pounds. However, Gastelum’s weight cut went south in a hurry prior to his bout with Tyron Woodley at UFC 183, as he was briefly hospitalized after missing the welterweight limit by 10 pounds. It wasn’t determined until the morning of the fight that the matchup would go forward as planned.

While UFC President Dana White credited Woodley for accepting the bout, he indicated that Gastelum would be best served competing at 185 pounds in future Octagon appearances; it was the second time in five scheduled 170-pound outings that the fighter had failed to make the welterweight limit.

Gastelum heeded White’s advice at UFC 188, as he moved to middleweight and scored a convincing stoppage victory over Nate Marquardt in Mexico City. Still, Gastelum had already expressed a desire to return to 170 pounds prior to the win. White, meanwhile remained skeptical.

“He’s gonna have to get serious and get a nutritionist,” White said at the UFC 188 post-fight press conference. “He had to cut to make 185 and he came in right on the nose. I am the furthest from confident that he is capable of making 170 no matter how much I like him or how much he says he can do it. I don’t believe it.”

Despite those concerns, Gastelum ultimately got his wish. He will return to welterweight to square off against Matt Brown in the UFC Fight Night headliner in Monterrey, Mexico, on Nov. 21. The 23-year-old doesn’t anticipate any problems leading up to his showdown with “The Immortal.”

“I just learn from it, grow from it and continue to progress from it,” Gastelum told UFC.com. “I have done that. I’ve made all the necessary changes. I’m working with a nutritionist now and this time it will be no problem making 170.”

Interestingly enough, Gastelum says that White was a positive force behind the decision.

“Dana White called me personally and gave me the fight. He also said he’d be paying for the nutritionist. His name is George Lockhart,” Gastelum said. “The UFC is putting a lot of interest in this fight. They’re putting their own investment in this fight, and it feels good to have that kind of support from the UFC, from Dana White. It shows the level of faith they have in me.”

Lockhart is well known in MMA circles, having served as a nutritionist for the likes of Cristiane Justino, Rory MacDonald, Jeremy Stephens, and Alex Garcia. He also helped the likes of Kenny Florian, Brian Stann and Dustin Poirier as they changed divisions in the UFC.

When upcoming opponent Brown learned of UFC footing the bill for Gastelum’s diet plan, “The Immortal” took to Twitter to fire back.

“UFC pays for his nutritionist? Conflict of interest?” Brown asked. “Gonna need more than chicken and broccoli to beat me anyway.”