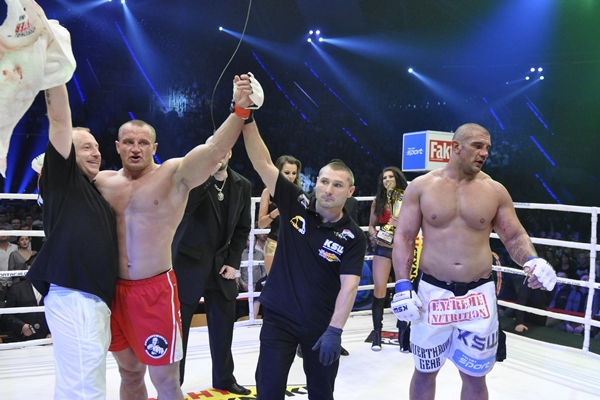 
LODZ, Poland -- Mariusz Pudzianowski, Poland’s biggest MMA attraction, avenged his May loss to James Thompson, while Mamed Khalidov got another quick victory at KSW 17 “Revenge” on Saturday at Atlas Arena.

In the two five-minute round clash, a standard bout length in KSW, the fighters appeared to take one frame apiece. The “Colossus” was vastly superior in the first part of the fight, taking down Pudzianowski with ease and controlling from side position.

Pudzianowski, whose conditioning was much improved from past outings, wobbled the Englishman with a flurry of hooks in the beginning of the second stanza. Thompson quickly recovered and later gained top position once again. However, it was the Pole who finished the fight strong, defending a throw from the clinch to land on top and sock his opponent with hard ground-and-pound.

As both corners prepared their men for an extra round, referee Tomasz Bronder informed them that a decision had been reached. It was Pudzianowski who got the nod from two of three judges; judges’ names and scores were not immediately available.

After the fight, Pudzianowski thanked American Top Team leader Ricardo Liborio for improving his cardio and overall MMA skills before revealing that he will continue to train with the Coconut Creek, Fla.-based team.

“I’m still a beginner in this sport and I’ve got a lot to learn. I’ll be back training in Florida in January,” said the muscular 34-year-old.

Visibly upset with the judges’ verdict, Thompson flipped off the crowd and shoved KSW promoter Martin Lewandowski before snatching the microphone and launching into a profanity-laced tirade about the decision.

“Give Mariusz a big round of applause,” Thompson, 32, jeered. “What a f---ing joke. I thought KSW was really trying to be serious. If you can watch that back and call it serious, then you’re f---ed.” 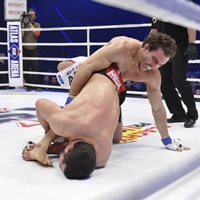 J. Totongi
Khalidov notched another quick sub.
In the show’s 187-pound catchweight main event, top Polish fighter Khalidov added another impressive submission victory to his MMA record, tapping onetime “Ultimate Fighter” finalist Jesse Taylor with a slick kneebar. It was the third straight victory for Khalidov in less than two minutes over opponents from the US.

Former UFC and Strikeforce competitor Taylor took Khalidov down almost immediately after the Chechen-born Pole missed with a flying knee. Khalidov remained aggressive from his back as he threatened with armbar and triangle choke attempts. The Team Quest representative defended well, but couldn’t escape when the local hero rolled for a kneebar. Taylor screamed in pain when Khalidov hyperextended his knee, prompting referee Bronder to intervene at the 1:46 mark.

Poland’s Jan Blachowicz claimed the KSW light heavyweight title by outpointing Rameau Thierry Sokoudjou in a three-round championship affair. Unlike their first showdown in March, Blachowicz aggressively attacked from the opening bell, clinching the Pride and UFC vet and hitting him with uppercuts. The Cieszyn-born fighter effectively used takedown scares to set up his punches and kicks, while negating the Sokoudjou leg kicks which cost Blachowicz the first fight. 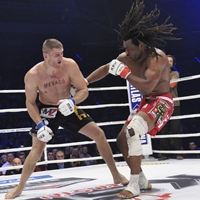 J. Totongi
Blachowicz (left) outpointed Sokoudjou.
After tiring the former judoka in the first two rounds, the Pole was finally able to hurt Sokoudjou in the third stanza. A precise jab dropped the Cameroonian and the local favorite followed him to the ground, where he passed Sokoudjou’s guard and achieved mount. Battered with punches, Sokoudjou gave up his back, but later escaped and landed on top. However, Sokoudjou was unable to do much damage before the final whistle, after which all three judges awarded the victory to the Polish fighter.

After the fight, Blachowicz thanked his main coach from Nastula Gym Warsaw, Robert Jocz, for his preparation and successful game plan.

“I owe him 90 percent of his victory,” said Blachowicz. “Pushing the pace and constantly attacking was our goal in this fight.”

On the undercard, rising middleweight Michal Materla need an extra round to outduel another American veteran, Matt Horwich. Known for his grappling skills, Szczecin native Materla gave up the first round when the former IFL champion twice took his back. The Pole came back in the second frame, stopping Horwich’s advances with crisp boxing and ground control. When the judges the declared the fight a draw, the Berserkers Team fighter won the overtime round by keeping his foe on the mat for almost the whole three minutes.

Lightweight Artur Sowinski pulled off the upset of the night when he knocked out former Zuffa competitor Maciej Jewtuszko in just 46 seconds. The 24-year-old from Radzionkow caught Jewtuszko square on the chin with a long right uppercut, then pounded “Irokez” with two additional strikes on the ground before referee Szymon Bonkowski called the fight.

Polish middleweight Antoni Chmielewski avenged his March loss to James Zikic, beating the well-travelled Englishman via split decision in a three-round war of attrition. Zikic showed impressive takedown defense, but the ferocious Pole was able to put him on the ground in every round.

In the opening welterweight contest, Khalidov’s cousin, Aslambek Saidov, earned a close majority decision over former M-1 Challenge champion Rafal Moks. Despite absorbing a number of hard leg kicks, the Arrachion MMA Olsztyn fighter was the more effective boxer, using his lead right hook from the southpaw stance and scoring two takedowns on Moks over the course of the two-round battle.