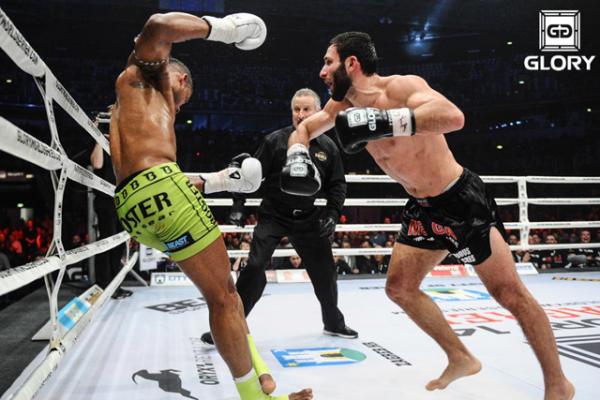 Davit Karia has his sights set on a familiar opponent. | Photo Courtesy: Glory


Glory lightweight champion Davit Kiria is calling for a rematch with former world No. 1 Giorgio Petrosyan.

Kiria (22-9, 7 KOs), from the former Soviet Republic of Georgia, captured the Glory title by stopping Andy Ristie in the fifth round of their epic encounter in March. Several fighters have jockeyed for position to be Kiria’s first challenger: Robin van Roosmalen is the top-ranked contender, while Ristie stopped American Ky Hollenbeck in June to return to the win column. However, Kiria -- an Ashihara karate stylist and student of four-time K-1 World Grand Prix winner Semmy Schilt -- admits his Glory 3 defeat to Petrosyan (78-2-1, 35 KOs) still weighs on his mind. He also considers Petrosyan, who has not fought since his knockout loss to Ristie in November, the most prestigious option.

“I’ve been waiting a long time for my next fight,” Kiria told Sherdog.com. “I was supposed to fight in July or August, but it was delayed. I heard now it might be October. I know there are some very big events coming in the near future, so I want to be on one of those. I’m looking forward to Glory planning my next fight.

“As to why I’m calling for Petrosyan, I would prefer to fight him, not only because I want a rematch but because he is the three-time world champion and remains the biggest name in the world of lightweight kickboxing,” he added. “I know he lost his last fight, but I don’t think that matters -- everybody loses at least once -- and besides, Petrosyan has only two losses in his entire career.”

Kiria’s 2012 fight with Petrosyan saw the Georgian put on a spirited performance but struggle to score on the Armenian-Italian, who has been compared to boxer Floyd Mayweather Jr. due to the general perfection of his defense.

“What do I think would be the difference if I fight Petrosyan again?” Kiria asked. “The short answer is that I will win. I will stay champion.”

As for Ristie, Kiria claims to be open to a rematch with the Surinam export whenever it comes along.

“We had very good fight plan for Ristie, and it worked very well,” he said. “When I fight Ristie again, we will make another good plan and it will work very well also. I have a strong, smart team and I believe in us.”

Ristie blamed his poor conditioning for allowing Kiria to stage a comeback and win their fight. Kiria begs to differ.

“He’s worked on his conditioning? Good for him, but he can’t do anything to me with this,” he said. “I also work hard and now [that] I have fought against him, I know him better. I didn't win with conditioning. I won with good boxing.”
« Previous Kickboxing News: Glory Appoints New CEO, Extends Spike TV Broadcast Deal Next Glory Heavyweight Jamal Ben Saddik Hit with Disciplinary Suspension »