There was a brief few moments in their much-hyped war where mixed martial arts legend Ken Shamrock thought he had nemesis Kimbo Slice beaten.

After scoring a too-easy single leg takedown, “The World’s Most dangerous Man” quickly moved to back control and locked in a rear-naked choke. It seemed like the end was inevitable.

Kimbo looked like he was going to either go out or tap out, but the submission specialist was unable to seal the deal and Slice eventually escaped the choke. After a wild scramble, the hated rivals stumbled to their feet, both gasping for air. After they squared up, Slice was all over Shamrock and landed a few right hands. They bothered the 51-year old Shamrock, who tried to brawl with the more powerful Floridian former street fighter, but it was of no use. Another booming right hand landed cleanly on Shamrock’s forehead, sending him sprawling backward into the cage and down onto the seat of his trunks.

Slice rushed in for the kill, but Shamrock was too badly rocked and veteran third man “Big” John McCarthy had seen enough and halted the action. The official time came just 2:45 into the fight and when it was all over, the two men -- who had trash talked for months -- embraced and gave mutual respect.

Kimbo said after the skirmish that he never thought about tapping and that there was no way he was going to lose the fight. His mindset rang true as he dispatched Shamrock like he predicted, handing Shamorck his second straight loss. Shamrock, who hadn’t fought for five years, has lost 11 of his last 15 bouts and though he didn’t announce his retirement, it likely will be difficult for him to get back up or another go ‘round inside the cage. 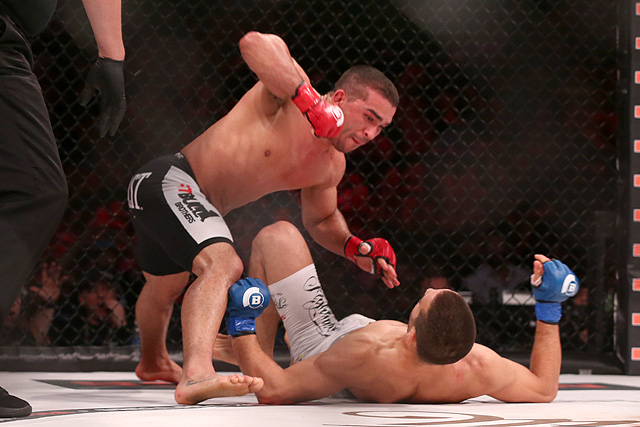 (+ Enlarge) | Photo: D. Mandel/Sherdog.com
Freire retained his title in vicious fashion
from the brink of defeat.
Germany’s Daniel Weichel thought that he had just won the Bellator MMA featherweight championship by stopping Patricio Freire. He has just rocked the defending champ with a powerful right hand and when “Pit Bull” staggered into the cage, a follow-up knee to the face buckled his knees. Weichel immediately pounced on Freire and unloaded a swarm of punches and that’s when veteran referee “Big” John McCarthy stepped in and pulled the challenger off.

But Weichel didn’t win and he didn’t snatch the belt from the Brazilian.

The round had ended and McCarthy rightly called off the action, saving Freire in the process. Weichel tried to briefly protest but McCarthy’s decision not to stop the fight was correct. In the duration between rounds, Freire was able to clear his head just enough to keep the stalking Weichel away.

Weichel pressed the action and trapped Freire into the cage, but when the unfurled a flurry of punches, Freire timed his explosive counter left hook and crashed it squarely on Weichel’s jaw. Once it detonated on its target, Weichel fall flat onto his back. “Pit Bull” pounced on his fallen prey, but Weichel was out, prompting McCarthy to officially stop it, allowing Freire to retain his title.

The official time of the knockout came just 32 seconds into the round, giving him his seventh straight win, his fifth stoppage during that time.

Lashley Pounds Away on Charles, Forces Stoppage in Second 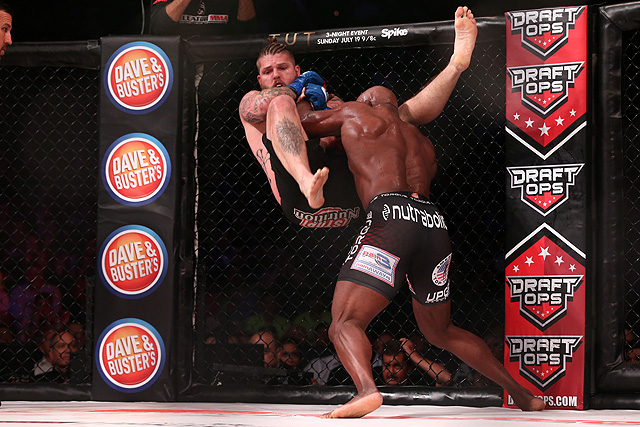 (+ Enlarge) | Photo: D. Mandel/Sherdog.com
Lashley tossed Charles around.
Bobby Lashley continues to inch closer to a shot at the Bellator heavyweight title as he administered a one-sided shellacking to Dan Charles, eventually stopping his foe in the second round. Charles was never in the match as Lashley continuously slammed him down and pounded away as Charles turtled up.

Charles offered nothing in terms of an offense and covered up whenever Lashley got close enough. Referee “Big” John McCarthy warned Charles over and over to stop holding onto the cage and to show him something, but with Lashley clubbing away at him like he was chiseling a slab of marble, Charles couldn’t do anything.

Finally, after several minutes of a slow, tortuous pounding, McCarthy had seen enough and pulled Lashley off, ending the fight. The official time of the TKO came at 4:14 of the second round, giving “The Dominator” his sixth consecutive win. 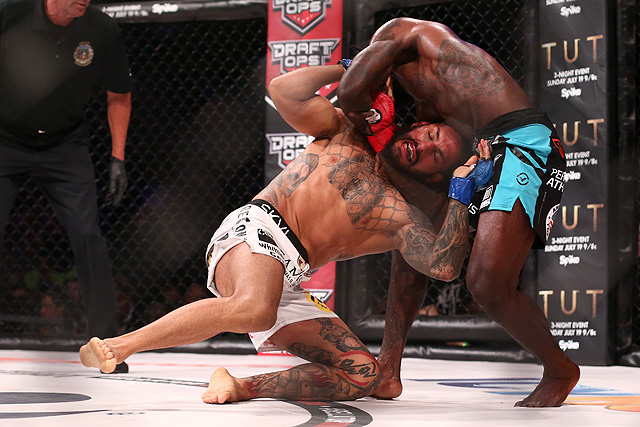 (+ Enlarge) | Photo: D. Mandel/Sherdog.com
Straus mauled formerly unbeaten Corrales.
So much for a bum knee and an unbeaten contender. Daniel Straus bounced back from a loss to Patricio Freire by utterly destroying Bellator newcomer Henry Corrales, forcing him to tap out in the second round.

Straus was all over Corrales from the start, pounding him with a plethora of punches and badly rocking his foe midway through the opening round. Corrales hung tough, though, and survived the maelstrom of punishment and was saved by the bell at the end of the first when he was stuck in a guillotine.

Straus continued to abuse his opponent in the next frame, landing more and more punches until a double left hook/uppercut knocked Corrales onto his back. Straus pounced but wasn’t able to put him away until the latched on a guillotine, forcing the King of the Cage champ to tap. The official time of the submission came at 3:47 of the second round. 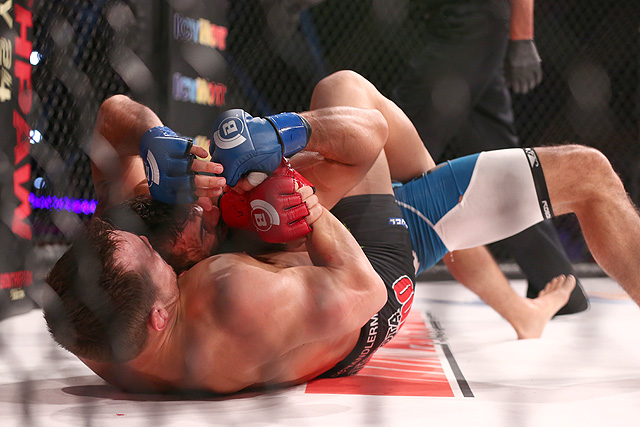 (+ Enlarge) | Photo: D. Mandel/Sherdog.com
Chandler showed out with style for his
home state of Missouri.
Michael Chandler has vowed to get things back on track and hunt down whoever holds the Bellator MMA lightweight belt when he’s ready. Chandler had lost three consecutive fights after starting his career 12-0 and things started to look grim for the Missouri native. Derek Campos was expected to be a tough test for the former champ, but Chandler made sure Campos never had a chance.

Chandler was on fire from the start, rattling Campos’ head with four powerful right hands to the face. Campos didn’t -- or couldn’t -- bring his left hand up to block the incoming attacks, so Chandler unloaded a fifth right hand. The shot was destructive as Campos fell flat on his back and had to scramble out from the punishment that Chandler was raining down on him. Campos escaped the hellish punishment, but Chandler never let him breathe, eventually scoring a takedown, seizing his back and slapping on a textbook rear-naked choke. Campos tried briefly to escape out of the submission, but he couldn’t and quickly tapped out. The official time of the submission came at 2:17 of the opening frame, instantly snapping Chandler’s winless skid.

Chandler promised to regain his lightweight title immediately after he was declared the winner and called out Will Brooks in the process. 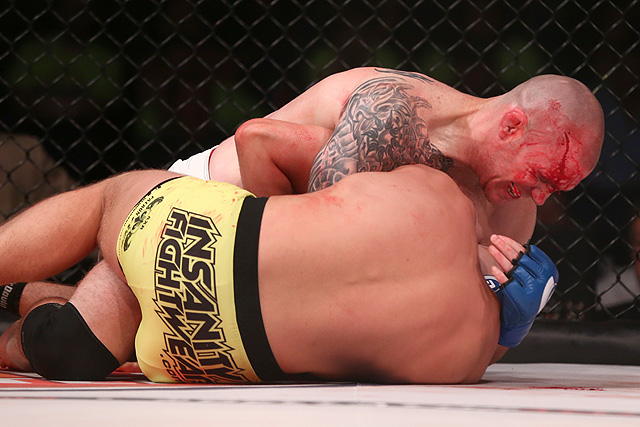 (+ Enlarge) | Photo: D. Mandel/Sherdog.com
Guthrie overcame major adversity early.
After being battered in the opening round of his contest with Steven Mann, welterweight contender Justin Guthrie ignored the gash on his head and the knee to the face that buckled his legs to win via submission. Guthrie caught Mann in an awkward brabo choke early in the second after the knee almost took him and forced Mann to tap out. The official time of the submission came 69 seconds into the frame, highlighting a solid Bellator 138 preliminary card.

Sean Wilson entered his brawl with Justin Lawrence with 60 pro fights under his belt and had only gone the distance once. Lawrence made sure that trend continued as he scored a TKO with only four seconds remaining in the opening frame. A right hand dropped Wilson and Lawrence pounded away until the fight was stopped. 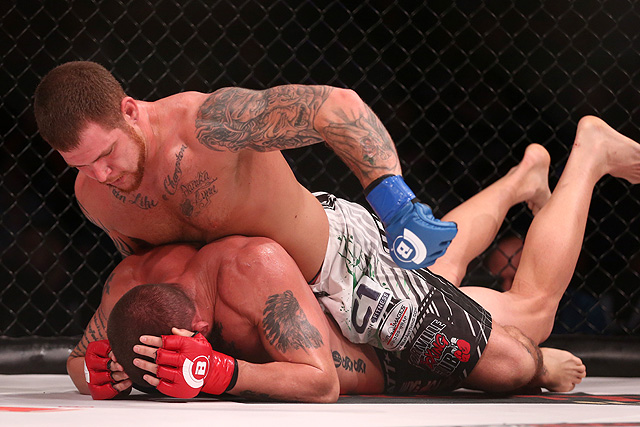 (+ Enlarge) | Photo: D. Mandel/Sherdog.com
Heatherly won with strong top control.
Chris Heatherly scored several takedowns and controlled Garrett Gross for three rounds en route to a unanimous decision. The fight wasn’t overflowing with action, but Heatherly dominated two of the three rounds mostly because of the ground control. He won the decision via tallies of 29-28 on all three cards.

Kyle Kurtz wasn’t getting torn to pieces in the fight, but Adam Cella was beating him. Cella was landing the better strikes and was in control more often than not on the ground. But after getting his nose busted up in the second, the tide left the shore and Kurtz pulled off a superb armbar late in the frame. Cella had no choice but tap out after Kurtz rolled him over and extended the joint. The official time of the submission came at 4:13 of the second round. 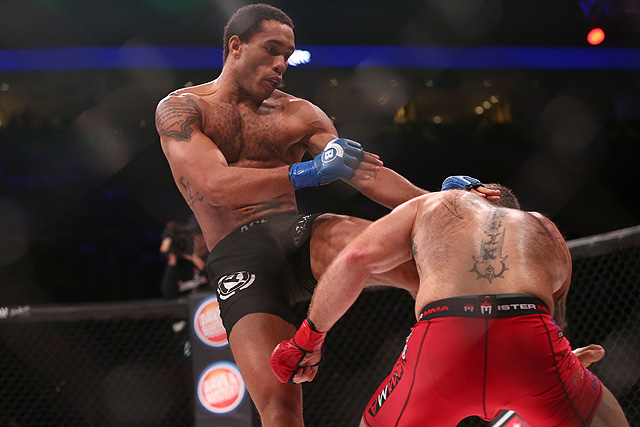 (+ Enlarge) | Photo: D. Mandel/Sherdog.com
Pulley won a nip-tuck contest.
Hugh Pulley eked out a split decision win over former training partner Eric Irvin after three grueling rounds. Pulley executed four near-perfect judo throws during the clinch and out-struck “The Hedgehog” down the stretch, capping off the fight with a sizzling left kick to the liver. Irvin collapsed after it landed but he hung on until the end, where Pulley won the verdict via tallies of 29-28, 28-29 and 30-27.

In what was the first ever strawweight battle in the history of Bellator MMA, Miles McDonald patiently broke down opponent Dan O'Connor and submitted him in the third round. After badly rocking O’Connor late in the first, McDonald wore down his shorter foe and eventually seized his back after a scramble in the duel’s waning moments. McDonald latched on a superb rear-naked choke and forced the tap with 30 seconds remaining in the fight.