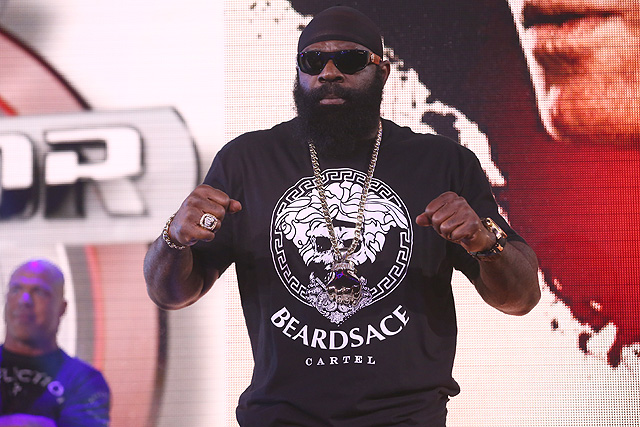 
The documentary “Dawg Fight” chronicles the rise of Dhafir Harris both as competitor and a promoter in the South Florida backyard fight scene.

Although he has only two professional mixed martial arts fights to his credit and hasn’t competed since 2011, the film helped to make the man with the moniker “Dada 5000” something of a mini-celebrity. In recent months, Harris’ Fight Finder profile has been among the most viewed of any fighter in the Sherdog.com database.

Despite making a brief cameo in the documentary, Kimbo Slice hasn’t seen one second of “Dawg Fight.” He clearly has his reasons, namely the film’s central character who once served as a bodyguard in Slice’s Miami-based crew.

Forget for a moment that Slice is a master of selling his own fights, that he almost never fails to mention the network and promotion that sign his checks and that he can seemingly manufacture beef in an empty kitchen. The animosity toward “Dada 5000” seems genuine, a hatred that stems from coming up in the same town, rolling with the same people and, unbeknownst to Slice at the time, owning similar aspirations.

But back when Slice was making a name for himself as a YouTube brawling sensation, he said Harris barely resembled the character he currently portrays himself to be.

“This dude had no beard. He had no tattoos. I don’t think he even had a job at the time, so we hooked him up, gave him a little work. Said come f--- with us, come take this ride with us,” Slice said. “Because this was a movement: me coming from the street fighting and having my first fight against Ray Mercer.

“So we brought a few of our guys with us on this run. [Manager ‘Icy’ Mike Ember] at the time paid for a lot of the boys’ tickets and helped a lot of the boys out to travel with us,” he continued. “And this dude was a real pussy about it. But he’s a real f---boy man. He’s a real sucker. For that reason alone, I just want to do something to him. I’m losing words right now, just getting amped up about it.”

Slice and “Dada 5000” will square off in the co-headliner at Bellator 149 at the Toyota Center in Houston on Feb. 19. Tickets go on sale Saturday for the card, which airs on Spike TV and features a trilogy bout between Royce Gracie and Ken Shamrock in the main event.

From the documentary it appears that Harris follows in Slice’s footsteps to a certain degree, initially making a name for himself as an up-and-coming street fighter. According to a synopsis of the film, “when Kimbo’s manager buried video of Dada’s spectacular backyard fight debut for fear of Dada overshadowing his rising superstar, Dada trades his time in the ring to start organizing brutal amateur bouts and becoming a backyard brawl impresario.”

Not surprisingly, Slice sees things quite a bit differently.

“You’re talking about a guy who stole my image, stole my look. Literally when I decided to turn pro, he decided to take street fighting in the wrong f---ing way,” Slice said. “…Even though it was a street fight, we had some type of respect for each other. He just made a mockery out of it. Guys were getting hurt and had no way to really recover from it. Everything about what he did and about him was just wrong.

Slice says that offer was met with silence for the longest time even though Harris called him out following a victory over Tim Papp at Maximum Fighting Alliance “New Generation 4” on Feb. 12, 2011.

“Somebody is going to sleep,” Harris said in reference to his former friend following his 50-second knockout victory.

It wasn’t until recently, however, that the two sides were able to agree to terms for a fight. Slice returned to the MMA limelight after a lengthy hiatus in June, scoring a first-round technical knockout of Ken Shamrock at Bellator 138. “Dada 5000” is 2-0 as a professional, with both of his victories coming via first-round stoppage in 2011.

“I told my kids to really forgive me right now, but daddy’s going to be a real bully. I’m gonna bully this dude. I’m gonna bang him up.”