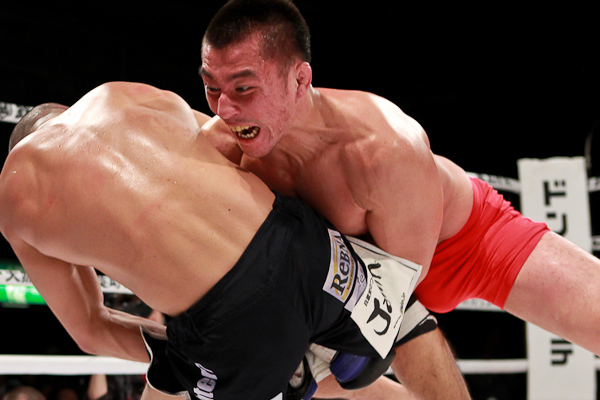 
TOKYO -- Takenori Sato narrowly kept his welterweight King of Pancrase title in a contentious split draw with challenger Eiji Ishikawa in the main event of Pancrase “Impressive Tour 9” at Differ Ariake on Sunday.

“It’s hard for me to think of myself as the champion after this fight. I couldn’t finish, so it probably wasn’t very fun to watch,” said an apologetic Sato, 26, in his post-fight address to the crowd.

An aggressive and cagey Ishikawa set the pattern for the first two rounds by charging the champion from the opening bell, using flurries to mask his takedown attempts. Once the fight hit the canvas, a smothering Ishikawa stayed close to drop short punches and seal the round while Sato punched from the bottom in between repeated -- and, apparently ineffectual -- kimura attempts.

The champion had a different appraisal of his performance in these rounds, however. Speaking exclusively to Sherdog.com, Sato conceded that while he felt Ishikawa’s takedowns, positional grappling and overall ability to keep Sato pinned down gave him trouble, Sato was still capable of handling himself. 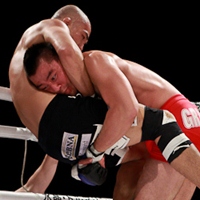 T. Irei
Sato hung in with sub attempts.
“I don’t think I lost,” said Sato. “I deserved the draw because I controlled the fight and attempted submissions, like the kimura from bottom. He had takedowns, but he only held onto me and didn’t try to finish. He took dominant position, but I was the one who tried to finish with submissions and strikes.”

The third round clearly belonged to the champion, as the Kazushi Sakuraba-trained Sato reversed Ishikawa’s takedown to secure the back-crucifix position and an eventual armbar attempt. Ishikawa escaped and shot for another takedown in hopes to seal another round for himself, but Sato was finally able to use a kimura attempt to reverse into top position, finishing out the final five seconds by dropping fully postured punches in mount.

After spending two rounds underneath the challenger, this final round surge seemed too little too late, as Sherdog.com unofficially scored the bout 29-28 for Ishikawa. Thus, it came with some surprise when only judge Yoshifumi Oyabu agreed with a 29-28 Ishikawa card. Judge Minoru Toyonaga instead sided 29-28 Sato, while judge Taku Aramaki ruled it a 28-28 draw.

“I didn’t think the decision wasn’t right,” admitted Ishikawa, 31, to Sherdog.com after the bout. “But, I suppose it was because I couldn't take top position in the third round. If I had, I think I would have won.”

While Ishikawa stablemate and cornerman Yuki Sasaki didn’t argue the draw, he did claim that scoring the bout in Sato’s favor was “impossible,” while Grabaka gym leader Sanae Kikuta chimed in, “Even though it was a draw, it still doesn’t change the overall result of the fight [being for Ishikawa].”

Sato’s own corner offered their thoughts, as cornerman and part-time Dream judge Hikaru Adachi stated, “In Dream, we judge the whole fight, and at least by that standard, I feel the fight went in Sato’s favor.”

A resigned, but smiling Ishikawa concluded, “It’s the fight game. It’s impossible to have completely fair decisions. Judges are people too, you know.”

Despite the draw, both Sato and Ishikawa left the bout $650 richer, having been awarded the evening’s “best bout” bonus. 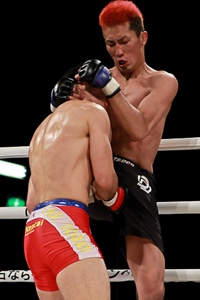 T. Irei
Takahashi took it to Oishi.
Yoshiaki Takahashi took the fight to lightweight King of Pancrase Koji Oishi but ultimately walked away with a draw in their non-title affair.

The fight posed a stylistic question to the judges, as both fighters favored attacks to particular parts of the body. In the first, Oishi smashed his opponent against the ropes and ring posts, repeatedly ripping hard shots to the body while Takahashi marked Oishi up with dirty boxing, giving the champ a mouse over his left eye. Takahashi emphatically took the final frame, further mashing up Oishi’s face with punches and driving brutal knees into the midsection. While Sherdog.com scored the two-round bout 20-19 for Takahashi, judges Hirokazu Takamoto, Tomoki Matsumiya, and Aramaki instead saw it a 20-20 draw.

Hiroki Nagaoka and Kosei Kubota windmilled their way to a majority draw in their welterweight bout, trading tit-for-tat largely thanks to their lack of head movement. The second frame was all Nagaoka, however, as he snapped Kubota’s head back with a steady stream of sharp southpaw jabs while blocking Kubota’s haymakers with his right hand. This was enough for judge Takamoto to rule the bout 20-19 for Nagaoka, but judges Oyabu and Hirotaka Tomiyama saw it a 20-20 draw.

Bantamweights Masaya Takita and Shoko Sato had themselves quite a scrap until Takita decided to finish it in the second round, earning the evening's $400 “best submission” bonus. 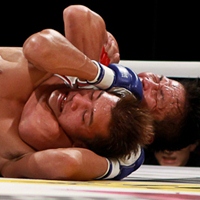 T. Irei
Takita put Sato to sleep.
Sato blasted Takita with soccer kicks to the face early, but “J-Taro” hung tough, indulging Sato on the feet for the rest of the round. As Sato outboxed Takita soundly in the first, Takita opted to take the action to the ground in the second, where he secured Sato’s back for the rear-naked choke. Rather than tap, Sato went to sleep, prompting ref Matsumiya to pry Takita off at the 3:00 mark.

Sojiro Orui scraped by Kenta Takagi in their welterweight bout, taking all three scorecards. While Takagi had his moments -- particularly when sparking Orui in the second frame with big haymakers -- it was Orui’s top game which helped him prevail. Controlling both frames by capturing top position, Orui put his stamp on the second as he also tattooed Takagi with short punches from half-guard. Judges Yoshinori Umeki, Kenji Kosuge, and Aramaki all saw the bout 20-19 for Orui.

Pancrase mainstay Yuki Kondo similarly edged Yuta Nakamura on the scorecards, keeping his opponent at bay with southpaw jabs and push kicks, while Nakamura connected with wide hooks and the occasional low kick in the opening frame. Kondo stepped it up in the final stanza, using tight combos, push kicks and tricky high kicks to steal the round. Judges Aramaki, Takamoto and Matsumiya all saw the bout 20-19 for Kondo. 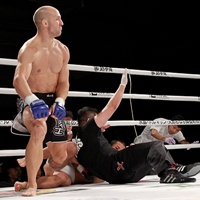 T. Irei
Shores made quick work of Ichikawa.
Fresh off his MVP-winning performance in Pancrase’s 2011 Neo-Blood featherweight tournament, U.S. Navy serviceman Jon Shores moved to 8-0 by racking up yet another finish, this time halting Masayoshi Ichikawa in the first round.

After a tense minute of circling and feinting, the Rodeo Style product dropped “Ichikawa Randleman” to the canvas with a punch and quickly locked on a guillotine choke. Ichikawa escaped just as quickly, but Shores gave chase, landing a stiff one-two which launched a supine Ichikawa into the ropes and almost out of the ring. Shores lunged to finish as ref Oyabu similarly dove in to save the Japanese fighter after 2:10. For the knockout, Shores was awarded a $400 “best KO” bonus.

In a battle of Neo-Blood tourney champions, 2011 lightweight winner Keiji Sakuta fell in the second round to 2010 winner and MVP Juntaro Ami. Despite spending a large portion of the first frame on his back, Ami kept busy, firing punches from guard. Sakuta appeared to have the better of Ami on the feet in the second frame, blasting him square in the face with a soccer kick at one point. Ami gutted it out, however, and eventually captured Sakuta’s back to sink a rear-naked choke for the tap at the 3:23 mark.

Shigeaki Kusayanagi, this year’s 2011 Neo-Blood welterweight winner, finished Kenji Nagaki with knees and a shower of punches late in the second period. Though Nagaki outwrestled him in the first period, “Kusa Max” stayed standing in the second frame, where he was superior. After marking Nagaki up with punches, Kusayanagi fired off knees in the clinch until Nagaki fell backward. Kusayanagi pounced and finished with punches at 4:21 of the second round. 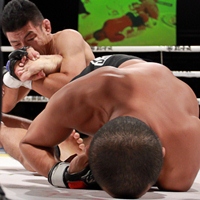 T. Irei
Yanagisawa won the leglock battle.
Ryo Saito and Masaki Yanagisawa traded submission attempts early until Yanagisawa took over with leg locks to finish in the first period. Utilizing his leg attacks to first sweep his way to guard, Yanagisawa soon found himself fending off the triangle choke. “Ryuki” quickly escaped and strung together a series of Achilles lock and heel hook tries, eventually tapping Yanagisawa with a heel hook at 3:17 of round one.

In a messy-but-fun grappling affair, Tatsuya So outpointed Kenichi Tosa, keeping Tosa on his back for the majority of the first frame. The scrappy Okinawan had his hands full in the scramble in round two, both capturing and having to escape side control. With So staying on top more often than being under Tosa, So was given 20-18 cards from judges Umeki, Takamoto, and Aramaki.

Junichi Ota and Shogo Ohashi split rounds to start the evening, with Ota winning the first on account of a long-lasting triangle attempt, and Ohashi taking the second thanks to his superior top control. The result was three 19-19 cards from judges Takamoto, Tomiyama, and Umeki.